PTI Chairman, Imran Khan is facing a heap of criticism for his recent remarks about Pakistani liberals. On Wednesday, Imran Khan said that Pakistani liberals are “more dangerous than anyone else”. He added that they are “always thirsty for blood”. Pakistanis on social media strongly condemn the statement by the politician and it was met with a huge shock.

People did not except the leader of a much sought-after political party to use such remarks. The reaction on social media bears testimony of the fact that many Pakistanis found his comments quite distasteful. 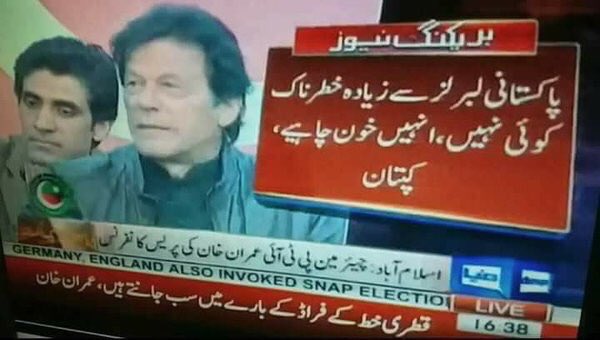 Here’s what people have to say…

History will not forgive Imran Khan for the vile misinformation he knowingly propagates in order to deliberately confuse a semi-literate population. Instead of educating them, he misinforms them all in his quest for that illusive power. Shameful and disgusting.

at this point, i would formally want to apologise for the times I have defended imran khan. sir, with all due respect, suck a dick.

It did not receive well with people at all

I would be irritated by Imran Khan if I thought he understood the meaning of the words that come out of his mouth. Don't blame the guy because he can't understand big words.

For ImranKhan, the 35 liberals that are already reduced to 3.5, & who have never picked weapons to kill or beat people, are "khooni". But guess what, he called TTP who killed 1000s, "apnay bhai" & wanted to give them office. His govt in KP funds Samiul Haq, the father of Taliban

Do you agree with him?

Why are people surprised at Imran Khan’s new attack on liberals of Pakistan? Not the first time he’s said such stuff.
In any case, his ideological positions have been clear. His party is an ally of Jamaat e Islami & intends to team up with Sami ul Haq (proud patron of Taliban).

How do you sum up Imran Khan’s comments?

I agree with the first part of Imran Khan's statement on being a real liberal. But to say that all liberals bay for blood without thinking of repercussions is an outrageous and a very unfair thing to say.

So according to Imran Khan Khadim Hussain Rizvi is not a threat to Pakistan but liberals are the biggest threat to this nation. I do not know to laugh or cry.

Do you think it should be confronted?

Seriously Imran Khan’s ‘Khooni Liberals’ bakwas needs to be confronted. The last time I checked, the blood count on the ‘liberal side’ involved getting killed not doing the killing. Mashal Khan, ring a bell? #MoronicEquivalences

Did IK say something about liberals?

Imran Khan’s comments have set social media on fire. He continues to trend and it is now taking a toll on people. What is your opinion on the whole matter? Do you agree or not? Share your comments.