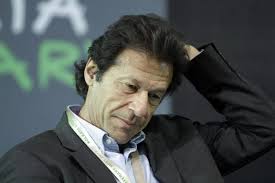 When the person begins the career in a particular field, he thrives and strives and reaches the epitome of his profession. But, then he realizes he can do something else as well for somewhat reasons, in this quest he fails to realize he can never achieve the peak of success he did in his previous profession. Same is the case with Imran Khan. Imran Khan played cricket and aced in it all his life and then entered into politics using his huge fan-following of cricket as the result he seems to be failing in his desire of becoming the statesman or the politician.

Unfortunately, I lack the intellectual and aesthetic sense to understand politics of Imran khan and I don’t believe in what Imran khan says or does. When he speaks, I genuinely try to understand as what he says; he may come up with some logic or rationale but, so far my effort for getting him and his point of view has drowned into bits. If we look into his political career, we will get to know it’s full of blunders. It gets worst when after realizing the blunder he commits, he comes open and gathers people’s sympathy for it. It makes the people who follow him look stupid as well (only if they realize it). 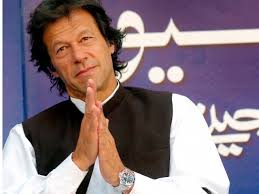 Imran Khan first blunder was supporting and promoting Pervez Musharaf in referendum of 2002. Once the general came notoriously extending his authoritarian rule and once the Imran Khan’s angel mind ushered in his ear about the blunder he committed as he was viewed as abettor in general’s prolonged rule, he withdrew from the decision and apologizing for the mistake he did. He used his positive-angel like image amongst people to get his apology approved by the people of Pakistan. Perhaps, it was too early to question his political acumen as he was just 6 odd years old in the politics of Pakistan. Then, it was his participation in restoration of Iftikhar Chaudhary to conceive so called justice in the country.  It was not long before when he appeared coward in the court of Justice Chaudhary denying any words uttered against him. Imran khan’s cowardice evaporated in the thin air once Justice Chaudhary retired and Imran khan’s ‘Dalairy’ (bravery) was unleashed when he started bashing the former Chief Justice in every public gathering accusing him of involvement in election rigging. Why did no body question Imran khan’s political acumen in this whole scenario? Didn’t he lack political eye to foresee the Iftikhar Chaudhary’s political maneuvering stared during the lawyer’s movement only or was he ignorant enough to acknowledge it at that point it time? If that was the case then what makes him different than any other opportunist and wily politicians? Again we witnessed his quirky tactics at work to show himself as victim in this so called conspiracy against him.

From above examples, it seems that Imran khan approves the wrong thing as long as it does right to him and otherwise. Isn’t that a quality of a cynic and self righteous dictator for whom his personal interests supersedes every other thing? I mean, he has all the power to abuse and neglect any measures of morality while addressing public gatherings. He can call anyone corrupt or honest, and provide entertainment to the people. He often calls the various office bearers corrupt and use abusive names, slogans and statement such as ‘wet their pants’ with no body daring to ask his credentials. The kind of language he has spoke makes it hard for anyone to imagine that he has been student of Aitchison College and got a degree from England. If that’s how these schools nurture the students, I bet none of parents with self-respect will send their children to these schools.

Imran khan also talked about the recent cross border shelling between India and Pakistan and took Narendra Modi to task while addressing. I see this act as nothing other than political point scoring capitalizing on ubiquitous India-Pakistan revulsion. Imran Khan is neither an official office bearer nor a statesman as its irresponsible on his part to comment on already tense situation that needs caution and thoughtfulness rather than statements of hatred. On other hand, the message Imran khan delivered to the world was that Pakistani nation has been supporting a person who wants violence and chaos in the region. Agreed, it’s his political right to talk about any political leader but isn’t he supposed to show responsible behavior and remain cautious of political point scoring?

The politics is always about power and that’s what Imran Khan vows to get. One deceits himself when he expects Imran khan to be puritanical leader as is thought by naïve young population of country. Imran Khan has always made blunders sin politics and doesn’t seem to learn from his mistakes. It gets worst when his followers give him sympathy on the pretext of his lack of political mind when he commits mistakes as it only gives him more space to commit blunders. Perhaps, he still seem to be living in his captain cocoon in which his courageous and risky decisions often took Pakistani team to winning quarters but now it’s about the whole country. In the politics there is no room for risk. Imran khan committed a risk of supporting Taliban to an extent that they made him their spokesman. But, only time revealed the naivety of his approach as whole nation stood with Pakistan Army to fight the pervasive barbarism of Taliban. Moreover, in the hullabaloo of Azadi March no body from the media or among his supporters dared asking him about the operation against Taliban. His cowardice exposed when he refused to usher a word against Iftikhar Chaudhary in the court and now, when he simply ignored his so alled principled stance on Taliban when he totally ignored to comment on Army’s operation against Taliban. Perhaps, we have been seeing the ‘tabdeeli’, aren’t we?

Yeh hain PPP k leaderaan! Sharmila Farooqui speechless! Truth revealed!
Ajmal-less Pakistan not in shambles as we tie hopes to Younus and Babur in the tests against Aussies
To Top