The first case of Coronavirus was reported in Pakistan in February 2020. After that, the federal government along with provincial governments have been trying tooth and nail to curb the menace. So far, PM Imran has left no stone unturned in tackling the menace and providing relief to the affected ones. This is the reason why people on social media now are praising the leader in the best possible words.

Prime Minister Imran Khan was part of a top trend on Twitter this morning for his untiring efforts to provide relief to the masses. Furthermore, many people even compared him with Quaid-e-Azam Muhammad Ali Jinnah. They lauded the leader for initiating the Ehsas program. Some praised him for being declared ‘Muslim man of the year’ by Jordan’s Royal Islamic Strategic Studies Center a year back. Others are just in love with him for taking bold steps amid the pandemic.

The second great leader After Quaid-e-Azam

#قائدثانی_عمران_خان
PM Imran Khan said that Pakistan was created under an objective and that was to follow the great principles of Riasat-e-Medina and the ideals of its founders Quaid-e-Azam and Allama Iqbal. pic.twitter.com/Ce5glkjotO

The most honest leader

Prime Minister Imran Khan is the most honest leader after Quaid-e-Azam Muhammad Ali Jinnah, who kept identifying the corrupt people and launched.#قائدثانی_عمران_خان❤2 pic.twitter.com/asUe3lloar

It will be written in history that there were two human beings who did not even beg for themselves: Imran Khan and Quaid e Azam Mohammed Ali Jinnah ❤️@TeamPVFofficial#قائدثانی_عمران_خان pic.twitter.com/EqluqiOdcG

#قائدثانی_عمران_خان
Prime Minister Imran Khan has been striving to transform Pakistan on the principles of Quaid-e-Azam Muhammad Ali Jinnah by challenging the status quo and ensuring the rule of the Law.@TeamPVFofficial pic.twitter.com/uO3zlJtaCP

‘Muslim man’ of the year?

Tweets were shared on Thursday that Jordan’s Royal Islamic Strategic Studies Centre has declared Prime Minister Imran Khan ‘Muslim Man of the Year’. However, this happened last year. We wonder, why people tweeted about it again.

This was a huge achievement for Pakistan anyway. Despite the utmost efforts of India to demolish Pakistan’s image, he has won the hearts of the world. His famous UN speech is an example, how a Muslim leader should be. In his UN speech, he defended Islam and said, “Terrorism has nothing to do with any religion.”

“There are 1.3 billion Muslims in this world. Millions of Muslims are living in the US and European countries as minorities. Islamophobia, since 9/11 has grown at an alarming pace. Human communities are supposed to live together with understanding among each other. But Islamophobia is creating a division.”

“Muslim women wearing hijabs has become an issue in some countries as if a hijab is some kind of weapon. This is happening because of Islamophobia,” Imran Khan had said.

“Imran Khan said that after the 9/11 attack, Islamophobia grew at an arming rate. Why did it start? Because certain western leaders equated terrorism with Islam, calling it Islamic terrorism and radical Islam. What is radical Islam? There is only one Islam.” 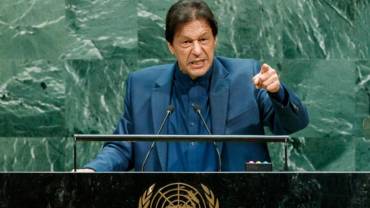 “This Islamic radicalism has been the main reason behind Islamophobia. This has caused pain to Muslims.”

Definitely, the enticing speech of Imran Khan is the reason for him becoming Muslim Man of the Year.

The Ehsas Program initiated by PM Imran Khan against poverty is going on in full swing. His decisions during the pandemic are being potently lauded. People are getting their cash and praising the PM on social media platforms.

Whereas current population of Pakistan is approximately 220 million. pic.twitter.com/62wEJR61qd

The best step towards ‘A Better Pakistan’

Ehsas Program is a great initiative

“Developing nations have been hit the hardest with the pandemic,” Qureshi said.

“Prime Minister Imran Khan had appealed to IMF for debt relief for developing countries which was accepted by the Fund. IMF has announced it would give one-year relief to 70 developing nations including Pakistan,” he added.

The foreign minister declared the relief by the IMF would be for 1 year and is supposed to be given from May 1, 2020.

Big news !!! With the efforts of Prime Minister Imran Khan G20 countries announced to give debt relief to the under developed countries including Pakistan in amid of economic crisis due to Pandemic . Earlier, IMF announced similar .

Many will not agree with this article but PM Imran has won the hearts of a majority of people across the country. There must be some reason why on several occasions in the past as well he was compared with Jinnah. Come what may, Pakistan at the most moment needs him to continue going strong particularly against the coronavirus.

Coronavirus Recovery Rate Is Better In Pakistan, Over 1600 Are Virus-Free
72 Families In India Sent To Quarantine After They Had Pizzas
To Top