How Imran Khan Fell In Love With Sheikh Rasheed? Watch Videos to Know! 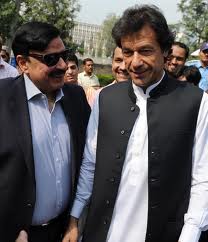 How Imran Khan’s hatred for Sheikh Rasheed turned into love? This is the question that arises in mind of anybody with little know-how of political affairs of the country. Well, it didn’t happen in a moment or even a month. It’s quite a long story. It’s almost like a typical Bollywood movie in which there is anything but hatred between Hero and Heroine. Both of them begin to come close only when a villain teases the heroine and as one could conceive, the hero falls from nowhere and protects the sanctity of heroine from the ferocious villain. And, the saga begins. The Imran Khan – Sheikh Rasheed loves story is quite similar to that. From bashing each other to embracing each other in arms during the recent Jalsas one is affirmed that only the earthquake and Pakistani Politicians are the only two unpredictable things in the world. And, this song plays into my mind, “Kitna Badal gaya Imran, Kitna badal gaya Imran…”

Imran Khan- Sheikh Rasheed love-story began with hatred and the enmity was conspicuous where ever both were seen together. Well, we could only see them appearing together in Talk Shows where both of them would bash the hell out of each other. Here are few videos showing that:

Also Read: Imran khan, another elite in poor man’s mask? So why Follow him!

Not only this, Imran Khan is clearly accusing Sheikh Rasheed of being a ‘Lota’ as he defected to Pervez Musharraf’s party PML-Q while he ran for elections from PML-N ticket. We may not know by whose support Sheikh Rasheed managed to win elections but one thing is for sure, he was blue-eyed boy of Nawaz Sharif before shifting loyalty to Pervez Musharraf. In this case we will take side of Hero Imran Khan, who was hero only because of his tenacity to speak truth on the face of cunning politicians. Sheikh Rasheed replies by calling Imran Khan a ‘Mamooli Kaptaan’ (Ordinary retired captain) who managed to win only one seat in elections of 2002. Well, it seems after the show ended, vocals as they are, both might have bashed each other with ugly words.

Within no time, Sheikh Rasheed became blue-eyed boy of Imran Khan. Perhaps, his peculiar nature and quirky jokes worked and attracted the beloved to him. Sheikh Rasheed needed love as he was dumped by previous two lovers and who better than charming Imran khan. And, Imran Khan, the so called harbinger of moral politics, accepted the political proposal of Sheikh Rasheed, abandoning all aspects of morality with brutality. Imran Khan often turned deaf ear to his old boys of PTI and would listen to Sheikh Rasheed’s whisper in the midst the hullabaloo of Jalsas and Dharnas. Now, the ‘love is in the air’. Sheikh Rasheed couldn’t stop praising his beloved in the talks hows, jalsas, and all forums. He clearly confessed his love in the following video. (Awww!!)

Imran Khan continues to be amused at Sheikh Rasheed’s jokes. Here he is seen laughing his heart out on hearing Sheikh Rasheed making mockery of Nawaz Sharif.

I must say I have never seen Imran khan laughing like this, the real happiness depicts on his face. Sheikh Rasheed knows the trick and posses magic to make his beloved happy.

The hatred between Imran Khan Sheikh Rasheed seems to have evaporated in thin air. One is well acquainted with Sheikh Rasheed’s stained political past but one wonders what happened to our truthful angel Imran Khan that he accepeted him whole-heartedly. There are two possibilities either Imran Khan lied to nation when he exposed Sheikh Rasheed’s cunning agenda in the early hatred-days or Imran Khan needs someone like Sheikh Rasheed for political expediency? Only Imran Khan can clear this out. But, in either case, it becomes crystal clear that Imran khan is none less perpetuator of ‘Status-quo’ politics just like other politicians of Pakistan.