The veteran actor Firdous Jamal just made insensitive comments about the abilities of the currently popular actor Imran Ashraf. Then, Ashraf replied back politely yet firmly, putting Jamal right in his place. It is no surprise that Jamal is involved in another such controversy especially after he criticized Mahira Khan’s acting skills.

It is okay to mention that someone can improve their acting but just downright insulting them is wrong. Previously, Jamal mentioned that Mahira should stop taking up the roles of heroines because she has gotten rather old. This is the hundredth time someone has criticized women for aging and still being a part of the entertainment world. Ironically enough, Mahira keeps getting relevant offers and even represented Pakistan at the Paris Fashion Week.

Jamal received a lot of harsh comments for his unnecessary analysis of another actor’s skills. But it seems like he just hasn’t learned his lesson yet. Recently, Jamal, once again, talked insensitively about the capabilities of the actor Imran Ashraf. Firstly, he started off by mentioning that the younger actors do not have that “wisdom” in them. Then, he proceeded to target Imran Ashraf for his role in the drama Ranjha Ranjha Kardi. That drama got Ashraf immense fame because of its relevant topic and his impressive acting. However, Jamal decided to disagree.

He said that Ashraf’s acting was spontaneous. Moreover, he further went on to mention that the other actors who took such roles, they didn’t “act” it but Ashraf did the exact opposite. Not to mention, Jamal also said that this generation just hasn’t seen great performances. Hence, he put Ashraf’s role at a relatively lower level than the ones performed by people before him.

The real question is that there is no reason to set up comparisons against actors. They act to earn a livelihood and every actor has their own style of conveying the role. If it doesn’t match the preferences of Jamal, that shouldn’t mean that the acting wasn’t good. Another thing to look out here is that Jamal has openly criticized a celebrity so whatever comes his way after this, he should be able to brace it.

Then, Imran Ashraf took to Instagram to give back a civilized response. He said: 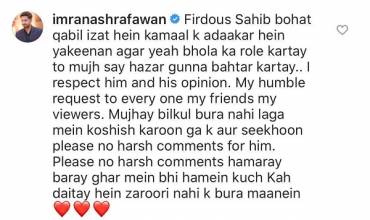 He did not badmouth Jamal but rather praised him. Ashraf mentioned that he didn’t take Jamal’s comments to heart and wishes to improve through them. However, he advised social media users to limit their hate comments. Topping it all off by saying,”Even if the elders in our house tell us something [offensive] it is not necessary that we take it badly”

People have been praising the approach of the actor and showering him with love because of the way he dealt with the situation. This can clearly be seen by the positive comments left on the actors’ social media accounts.

What do you think of the situation? Do you believe that Firdous Jamal was in the right to be criticizing Imran Ashraf like that? Share your thoughts using the links below.

Tecno Just Launched Its New Phone ‘Spark 4’ In Pakistan And It Is Absolutely Lit!
People Using Phones With Old Operating Systems, Time To Say Goodbye To WhatsApp!
To Top