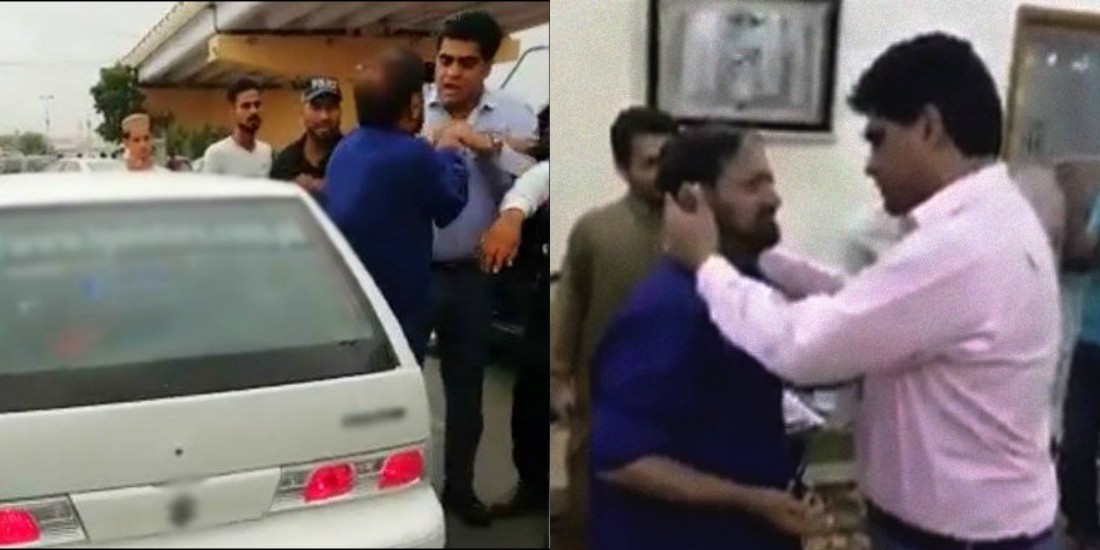 PTI leader & MPA Imran Ali Shah is all over the Pakistani news ever since a video of him assaulting a man on the street went viral.

The incident took place on Stadium Road, Karachi. In the video, Imran Ali Shah can be seen slapping a man in a blue shirt repeatedly. The video went viral on social media, getting thousands of views.

There was a great amount of public outrage. A common man was being assaulted by a Government Official, along with two of his guards. The lack of accountability was not just surprising- it was downright astonishing. The son of the person who was assaulted posted on Facebook, putting forward his thoughts on the matter.

This man standing next to me is My father and is the Senior Additional Director of Pakistan Civil Aviation Authority. My…

The text says the following:

This man standing next to me is My father and is the Senior Additional Director of Pakistan Civil Aviation Authority. My first question to all of you in this country. What if he was your father? What have you done? Secondly, My father is an old friend of Mr. Firdous Shamim Naqvi and Mr Najeeb Haroon, they both know the credibility of this man. He is one of the most honest and dedicated officer in his department. What if he was not the friend of Firdous Shamim saab and Najeeb Haroon saab(Jinki may dill say izzat krta hun) and because of these two people he entered our house and we gave him the opportunity to apologise. What if my father was an unknown man, would Dr Imran have still came? With whose reference? We are a simple peace loving professional aviators. We still believe on the true acts as a Muslim and that is what my showed as a person came to our home and apologised and My father accepted the apology. But if you were the son of this man, would you accept the apology? If it was US or UK where would have been the state? Just answer me how should I make my heart understand? If my father got bumped into an other car and that man and my father exchanged some words, did My father slapped that person? No he didnt. I dont need any social media publicity my God knows that, Ive been privileged enough to have one being and active member of this society. My only question is where is state? Neither we have any personal grudge with Dr Imran nor with PTI. My father has said this on media that we thank Mr Imran Ismail, Mr Najeeb Haroon and Mr Firdous Shahmim Naqvi. I am saying this should not be related with the act of complete PTI. Because my father is himself been a fan of Imran Khan. But again, what if it was happened with your father, what would have been your status? WHERE IS STATE. How should I make my heart feel relax.

It is clear that Imran Ali Shah saw this post. The next thing we knew, he’d showed up at the man’s (Dawood) house and met him to apologize.

It was a good step by the politician.