Tons of Pakistani actors are crossing over to International work. Pakistani actor and former model Imran Abbas has always been a popular choice for film-makers across the border. Lately, the actor announced a piece of big news regarding his work. 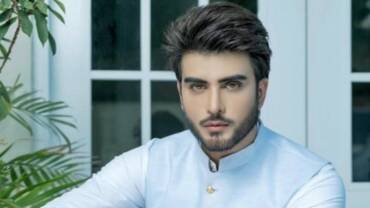 The Khuda Aur Mohabbat actor had a Q&A session on his Instagram. It goes without saying that the fans bombarded him with a number of questions.

Pakistani actor Imran answered some of his fan’s questions on his Instagram regarding his upcoming projects. We last saw the actor in drama series Thora Sa Haq and Jo Tu Chahey, and since then we have hardly seen him on screen.

While answering to a fan’s query on social media, the Pakistani heartthrob officially announced that he is taking a break from Pakistan entertainment industry. One of his fans asked him about his upcoming drama to which he replied, “You won’t be able to watch me on TV for another one and a half year more.” 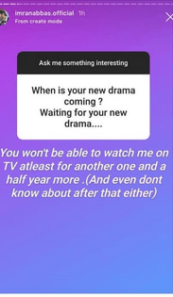 The actor has been growing his hair for that ‘special project’. Although we highly doubt that it’s Bollywood due to the current tensions between Pakistan and India. So let’s see which International film industry he will be seen in! Lastly, in the Q&A session, he also hinted at launching his very own YouTube channel like the many other actors. He said, “All will be shared at my YouTube channel soon. Wait for the launch.”

While we talk his showbiz career, the actor successfully made his Bollywood debut opposite Bipasha Basu in Creature 3D. Not only that but his cameo in Karan Johar helmed Ae Dil Hai Mushkil had also been highly praised by the critics. Not to forget that he also got nominated as the world’s most good-looking man!

In addition to this, the 37-year-old also declined Sanjay Leela Bhansali’s romantic saga Guzaarish (2010) a few years ago. He declined it only because the role offered to him turned out to be quite insignificant. Whereas, a few years later he chose to debut in Bollywood as Bipasha’s leading man, with Creature 3D (2014).

Imran has also starred in some major TV productions. These include Umrao Jaan Ada, Noor Mahal, Khuda Aur Mohabbat, and the latest Koi Chand Rakh Meri Shaam Par. Just a few months ago, in an interview with Samina Pirzada, the actor also talked about his love life.