Pakistani actor Imran Abbas in a live session on Instagram shared an incident where one of his female fans ran away from her wedding to marry him.

While answering the weirdest fan moment, Abbas shared the incident with his fans. “A fangirl ran away from her wedding night and came to a TV shoot. She insisted me to marry her,” she wrote. 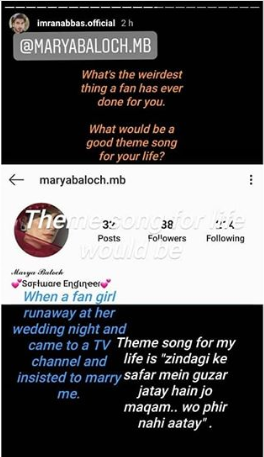 Imran Abbas is one of the most eligible bachelors of the Pakistan entertainment industry. His love life and marriage have grabbed headlines several times. Abbas has once revealed that he indeed had fallen in love and even lost love at a very early age. He said he fell in love for the first and the last time when he was in college.

The actor implied that he was still in love, but a different kind of love. Abbas also shared that for him the meaning of love had changed now. His first experience left a lasting imprint on his life which can never go away.

He, however, wants to have an arranged marriage now. Abbas wants to get settled soon and wants to start his own family.