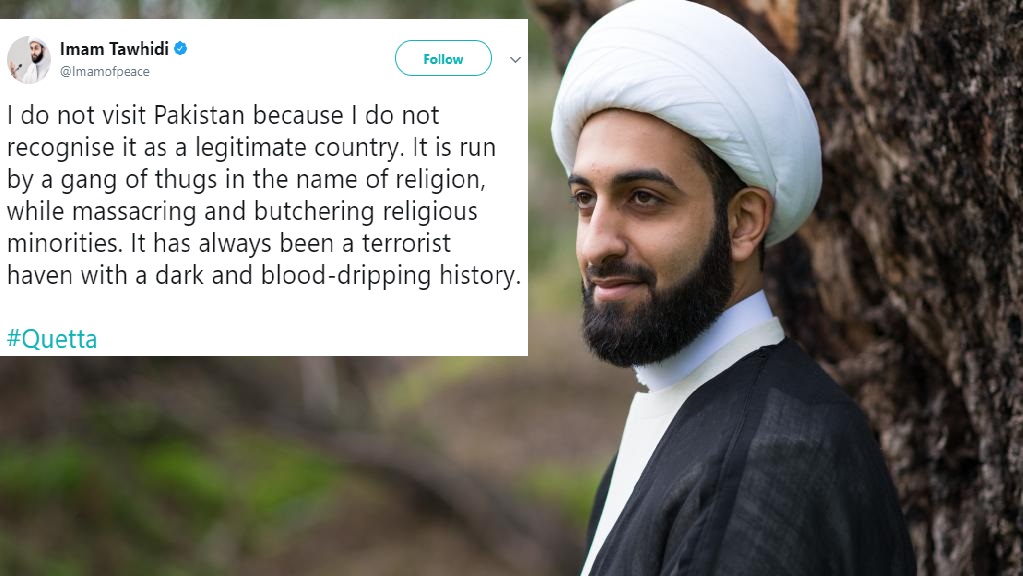 The West, often, has shown continuous hatred in regards to the Muslim world. The recent Palestine-Trump controversy shows the country is viewed by the leaders of the top countries in the world. Due to such statements, arguments are stirred among religious fanatics and extremists.

While many have seen the injustice Palestine has experienced, the Palestines have always urged the fellow Muslim brothers and sisters to play their role and voice for them.

This includes the famous, influential Muslims preachers as well. However, this one “imam” as shown complete hatred towards not just Palestine, but now targets Pakistan as well.

With the Handle of @Imamofpeace, Imam Tawhidi Speaks on Matters that Most of the Times Oppose to the Preached Sentiments and Notions

The Quetta Church blast recently shook the entire country. Given how Christmas is around the corner, religious extremists indeed showed their vile side by targetting the minorities yet again. In this regards, Imam Tawhidi said, “Pakistan is run by thugs in the name of religion.”

He Regards Pakistan as a “Terrorist Haven”

Furthermore, he Said the Following

Despite how numerous Pakistanis are following him, the Imam of Peace continued showing his hatred!

He Stated that the World Speaks About How Palestine Took Israel’s Land, but No One Comments on How Pakistan Took India’s Chunk

Pakistanis were furious to read this Imam’s extremist views towards the country. He further justified his extreme statements by saying the following:

Ohhh man idk are u even muslim
Astahfirullah how you mock someone who Prophet SAW loves the most
How you will face prophet SAW at the day of judgement pic.twitter.com/mDAWOIb5mq

According to a user, Imam Tawhidi is not really an Imam:

He's not an Imam, in fact he's not even a Muslim. He's doing this to spread confusion, hatred and misunderstandings among Muslims.https://t.co/u8UGLaBllB

According to ABC, the Al-Mustafa University in Qom revealed that Mohammed Tawhidi is a dropout and did not complete his education in Islamic Theology and thus, he should not be preaching in any way.

It is indeed a shame if this Imam is a scam in the name of Islam because thousands of people are following him.

Despite that, he preaches extremists views, which contradicts the teachings of Islam.