The Imam Of Peace Just Ridiculed The Concept Of 72 Virgins In The Most Hilarious Way!

The Imam of Peace is known for ridiculing outlandish theories on social media. With a following of 172,000 on Twitter, the Imam’s opinions are enjoyed by the general masses, as he does not follow old-school doctrine, but believes in toning Islam according to today’s world.

Recently, the Imam of Peace went viral on Twitter once again, for his almost epic tweet. For centuries, there’s been a myth around of Muslims getting 72 virgins (women) in Heaven, once they leave the world with good deeds. Muhammad Tawhidi, an Australian-Iraqi Muslim preacher, debunked the concept and proved how the saying is just a support to misogyny. 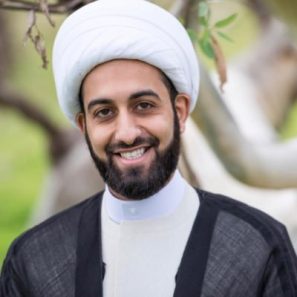 “God cannot ‘reward’ men with women, because women aren’t objects,” Tawhidi told a WebPortal. “God informed us of grapes, rivers, delicious food and other things that will be in heaven. He also informed us of opposite genders. It doesn’t mean that they’re at our disposal,” he added. Imam Tawhidi further went on to say that women aren’t objects, that they’d be presented as a reward.

“God does promise ‘women’ in paradise, but he also promised ‘lads’ for females. The details of ‘large breasts’ and ‘hairless bodies’ with ‘amazing scents’ comes from the unauthentic Hadith,” he explained. The thing is, that there is no mention in Quran about the number of virgins, as Allah Almighty has only mentioned 72 wives for man.

The Hadith states that “every male admitted into Paradise will be given eternal erections and wed to 72 wives,” but it is considered weak and unreliable by many Aalims and Muftis.

?? Respect for being able to keep a clear head and think of human dignity.

The Imam that tells the truth, ladies and gentleman. #ImamOfPeace

Amazing, you absolutely are

Exactly – which just shows that it was all propaganda rather than scripture or scholarship.

Wow! May God bless you.

Imam Tawhidi’s stance might be disputed by some, but one thing is for sure, the Imam of Peace surely knows how to stir things around. Only Allah Almighty knows what the real truth is, but people on social media have supported the Imam of Peace on his views regarding the 72 virgins.

The Pakistani Social Media Is After Feroze Khan’s Newlywed Wife and It Is Utterly Disgusting
Malala Yousufzai Returns to Pakistan after 5 Years and People Are Absolutely Enraged!
To Top