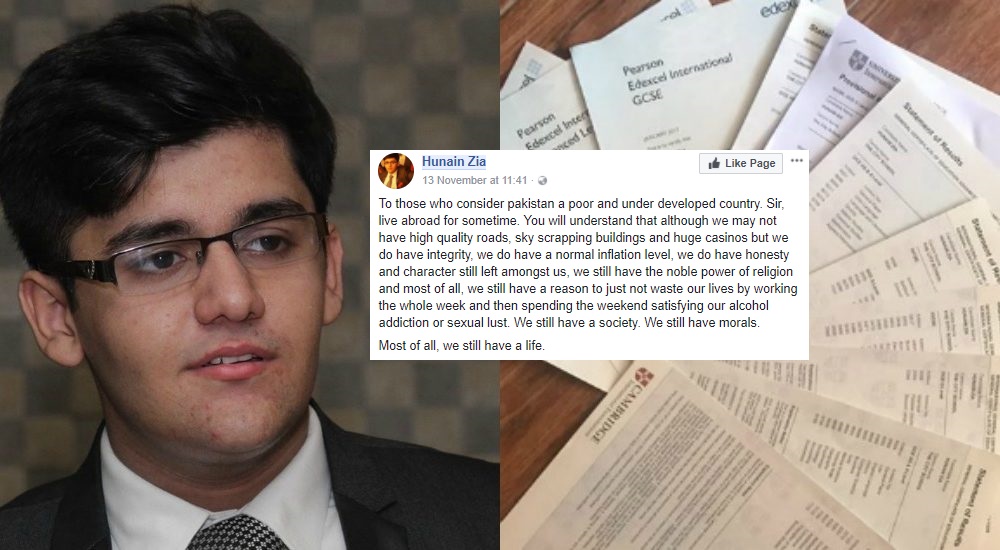 No matter what they say, Pakistanis sure know how to create a record of their own. Be it Ali Moeen Nawazish or the wonder kid Hunain Zia, proving their vital ability in educational curriculum determined examples all over the world.

Just a few months ago, Hunain Zia made it all over the news by securing 66 As in his O and A-level exams. Despite how education is one of the biggest concerns of our country, those who are availing it sure know how to make the most of it, and students like Hunain Zia prove it more.

However, sometimes such bright minds have a different opinion than the general perception and Hunain had his.

He stated how Pakistan is way better than other developed countries, despite not having huge skyscrapers, quality roads and a lifestyle we wish to adopt. 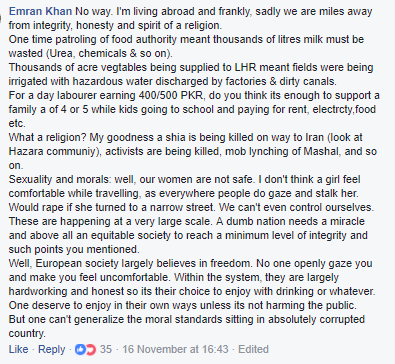 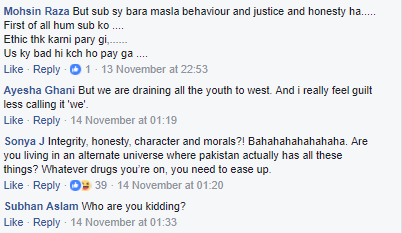 Because Hunain was unable to make his point to the youth he was addressing, Parhlo got in touch with the wonder kid to hear his side of the story.

Recently, I wrote a post regarding how Pakistan is better compared to the western world and almost everyone who interacted with the post qualified the statement by pointing out as many problems in Pakistan as they possibly can. With all due respect, those who have not lived abroad should understand that unless and until you experience something yourself, you can never actually realize how good or bad it is. I was one of the greatest supporters of the well-assumed Western greatness before I had the chance of spending these past 14 weeks in the USA. Within the past 14 weeks, I came to terms with the fact that there are great illusions in what we perceive back home and what the world is like.

I wrote that we have a moral standard better than the world of the west. The best part of the counter-argument I received was people citing out stories that a man raped a chicken in Punjab, or a female was patrolled naked on the streets. Let me clarify, I NEVER SUPPORT THESE KINDS OF ACTS. But trying to judge the entire nation on a few acts is indeed delusional. The majority has to be considered when we are judging something. People here in America have forced morals because the law here is way too strong for them to break morals and escape. Even abusing someone without purpose can land you in jail. Let us say that 10 percent of the people in Pakistan rival these moral standards. You know what the difference is, they are not forced by law to do so because our legal framework is nowhere this strong.

The same thing goes with the way youth here spends their time. I acknowledge the fact that a considerable part of our youth may have the same life routines as the Americans, where their weekends may be all about alcohol and marriage less sex, but this is nowhere the norm. Majority of the youngsters are not involved in these things. Some are, and honestly, I know many of them, but still, most aren’t. I asserted that we have a society. I honestly ask someone who has been exposed to the capitalistic world, are we more cohesive or are they. Here in America, the best way to define life is, “Live for yourself”. I can’t understand why don’t we acknowledge small acts of kindness that are still prevalent in our society.

Last, but the most interesting one, was when I said we had the noble power of religion. With due respect, consider the majority again. The western world is more secular than we are. For them, this life is everything, Most of the people generally lead this life as their only shot at living. That is the reason that while Christianity and Judaism both speak against adultery, gambling, rampant drinking, these are the norms of this society. Comparatively, At least, we can find a greater ratio of Pakistanis believing in their religion.

I never asserted that we are anywhere near to the level of economic development of these counties. No! We aren’t! In terms of the law, in terms of GDP, in terms of corruption etc, we have a fairly long route to cover. People pointed out that I am delusional because I have money and power, and I have lived a life many haven’t. To all those who assumed, my instincts are lower than you assume. I have lived a life poorer than many of the keyboard nazis can ever expect to live, but I learned one thing: Gratitude can make you feel hopeful even in the most hopeless of situations. Instead of wasting time bragging about how poor your country is, use the same energy next time when you are eating while driving to stop by a trash can and throw the wrapper than throwing it on the street( the most simple of examples, for those who can understand).

With all this said, I believe that the Western world is better than us on one thing for sure: they know how to be proud of who they are and work for their betterment rather than crying on social media about how ‘destructed’ they have been and doing nothing to improve the situation

No words can be better than the Holy Quran, and I end by His Almighty’s words, “which of your Lord’s blessings(favors) will thy deny”.

Given what Hunain said, what’s your take on this?

According to this Islamic Preacher, Muslim Men Shaving Their Beard is Equal to Cutting Their Limb
Huff Post India’s Editor Tweets About Ali Zafar And We Totally Ship It!
To Top