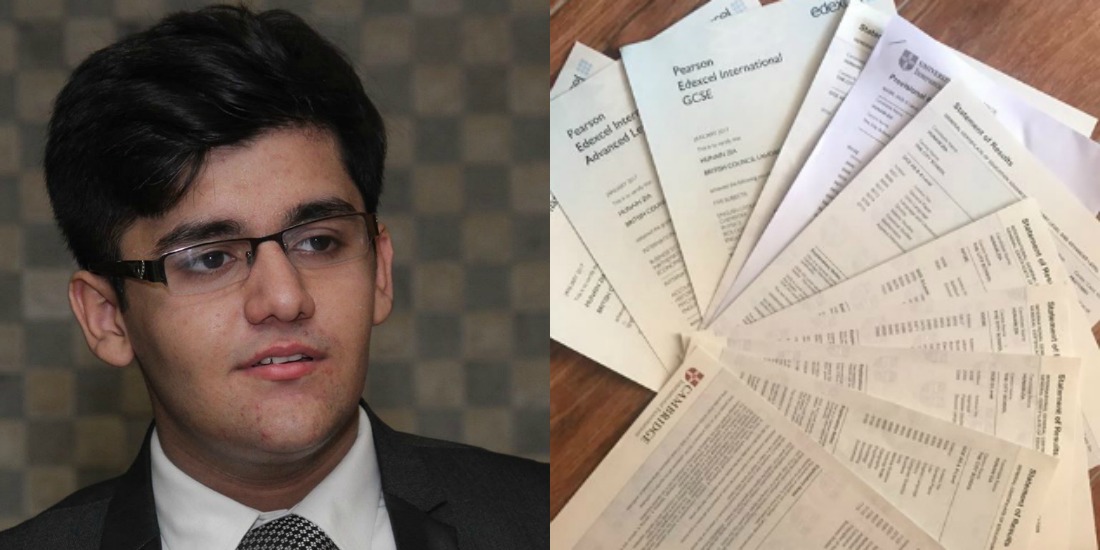 From time to time, out of nowhere, Pakistanis come out with achievements that remain unparalleled. Education in Pakistan is a very ambiguous and perplexing game altogether, some say that Pakistanis have mastered the art of acquiring the best education there is, while others opine that the people of the country are opposed to the basic demands of education.

Overcoming all these obstacles, one Pakistani student from Multan set the trend straight and his name heard out loud. Meet Hunain Zia, the kid who has finally finished his O/A Level IGCSE exams and secured a WHOPPING figure of 66 As!!

Hunain had previously spoken to Parhlo, saying, “Look it goes like this. I am aiming to achieve a hundred As in International secondary and advanced qualifications. The only reason is I aim to establish free education in the future!” — The dream it seems, is now a little closer to reality. This is what Hunain posted on his social media page.

“Alhamdullilah. Made it to 66 A and A stars in O Level, A Level and IGCSE and a distinction, with multiple world records, including maximum appearances in one session (27 days) = 45 subjects (154 papers) and highest hours of constant examinations = 19. In January, when I first uploaded my result of 42 A, people frequently asked me the reason I gave so many subjects.Today is maybe the best opportunity to cite the story that has never surfaced before. I was a normal student till last year with only 12 A and A Stars and a normal number of subjects ahead. On the 5 of April last year, however, I lost my best friend due to circumstances. It was a great shock and that left in me a feeling of not being capable enough.

So began my work to gather a team of people who could work on the aims I had in mind to revolutionize our society. Mr. Editor became my right hand in this. Although a very few, after 2 months of constant work we gathered as “Flex Hazel” and this became the reason I embarked on appearing in the subjects in January and yet again now. We are determined to make a difference to help people and have a set direction since we gathered. We, as a team needed a spokesman and a leader, whom people would hear and respond so that our projects can help the maximum number of people, and we needed him to be known fast. So after the collaboration with Mr. Editor, we decided that I could fill that place by ensuring that my results gave me a voice. 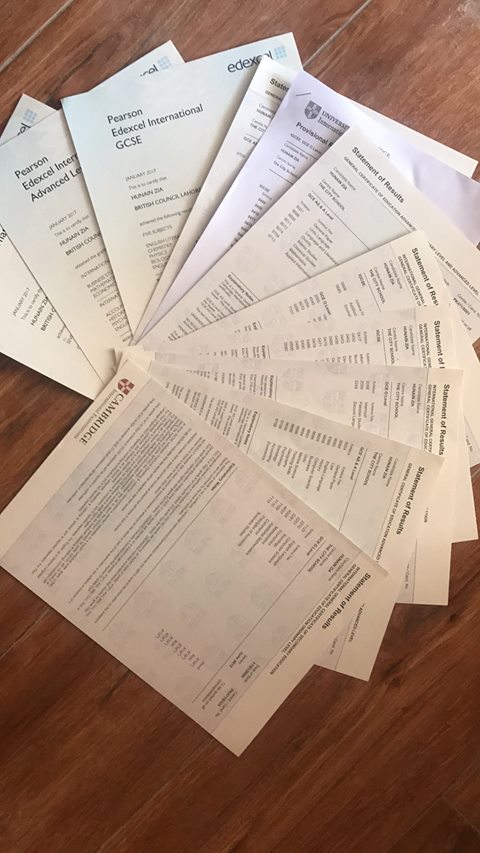 On behalf of Flex Hazel, I announce that within the next 4 years IA, we will start 4 major and 3 minor projects in Pakistan designed to help every stratum of the society. A free education and youth support are our two main aims. We have already launched the first registered Talent Hunt of Pakistan with its official page www.facebook.com/talenthuntpakistan. The official launch date is 21 August, yet beta testing is underway. However, I am just a link in the chain and do not deserve the total credit for what many are jointly trying to accomplish. Although I am in the most senior management yet I am just a passage in the route.”

Once again, we wish Hunain the best of luck with his future ventures and hope that he aces whatever platform he chooses for himself and for the betterment of education in Pakistan.

Talented, gifted and overperforming individuals like Ali Moeen Nawazish, Haroon Tariq and Hunain Zia are the shadows behind silhouettes that prove that hardwork and determination can get you as far as you want.