The Shock Of Life: Man In Kasur Finds Human Finger In Chicken Burger

A man in Kasur recently had a taste of more than just chicken when he was eating a chicken burger. To his surprise, when he was finishing his meal he tasted something hard — a human finger.

There have been recurring incidents in Punjab where raids have been done on local hotels and restaurants. These raids have resulted in the discovery of meat of prohibited animals such as horse and donkey meat. This was being passed off as halal beef or mutton. However, the occurrence of bad news doesn’t end there.

According to reports, a human finger was found from a chicken burger at a restaurant in Kasur. This incident has raised questions over the accountability of food outlets in Punjab.

According to Such TV, a resident of Nafis Colony had taken a chicken burger from a restaurant named chicken boss. While eating the chicken burger, the resident felt the presence of a bone in his mouth. When he pulled out the bone from his mouth he found out that it was actually the front of a human finger, including the nails that was in the chicken burger. As soon as he saw this, his health deteriorated and he started vomiting. 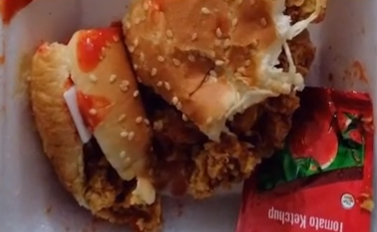 The local citizen eating the chicken burger has now applied for action against the relevant food point. In the name of fast food, the human finger in the meat raised a question mark. Citizens are demanding a full investigation as to where did the meat came from and why was a human finger found from it.

After going viral on social media, the food Authority visited the restaurant and seized important evidence. The food authority will take action against the restaurant after receiving the forensic report of this incident.

This is not the first food-related incident to come out of Punjab. In 2016, tons of pig meat was brought into Lahore from Rawalpindi last September. The Punjab Food Authority (PFA), on a tip-off, raided the Lahore Railway Station. They caught a man unloading the pig meat, which packed in two drums and four bags from a train.

Another incident occurred in 2017 when the PFA raided eateries of the Emporium mall by Nishat Group. The food court of the mall is filled with a wide range of famous local food fast food and other alternative food cuisine brands that people enjoy. The PFA raided these eateries and many were imposed fines after proving to fall below the set food standards.

Even though PFA has made claims that it is making efforts to provide the local citizens with quality food, yet the practice is continuing unabated across the province. Government officials need to start taking strict action against those who are caught. Moreover, they need to make sure that any of the restaurants not complying with government regulations are denied from selling food in the market.