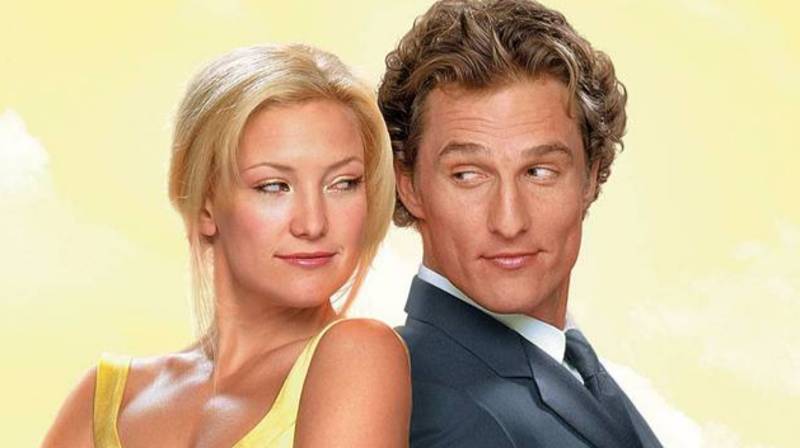 The storyline revolves around growth, commitment, and achieving high which eventually ends with true love, of course! How to lose a guy in 10 days is a classic chick-flick, that will leave you in awe.

Benjamin Barry- a guy who is a determined advertisement executive, a handsome man played by Matthew McCaughey. Confident about his personality and looks but only gets paid promotions of some soda and sports channels. Keeping an eye on something big, he wagers his boss to trust his abilities and give him a chance to make any women fall in love with him. And after 10 days lady will be with him at the party and the promotion of diamond stone will be in his hands too, deal done.

Andie Anderson-a passionate writer who wrote for a well-known magazine on topics related to “how-to.” Running out of the subjects from politics to general ideas, one fine day her friend got dumped by a guy (her boyfriend) from there she got an idea to write on “How to lose a guy in 10 days”. This will help her to stand out and prove to her boss that she can think out of the box and can write in many directions.

The Story Of How To Lose A Guy In 10 Days Starts Here!

Both the main lead, with the idea to get recognition and promotion back in their head, start a search, Andie wants men to experience and Benjamin a woman. Both the characters meet in a bar, where the actual game starts, ben (Benjamin) puts all of his efforts into adoring a lady and flatter her. Andie was also playing a very well-plotted match to make him slip away in a few days and leave him after exactly ten days. After putting in every effort from both characters, the romantic- comedy part starts.

And of course, without any doubt, they fell in love, regardless of how pre-planned dating and mingling it was! From pretending to do it for the sake of a career, it starts becoming a reality.

Bearing every act of love, stupidity, and fun just to accomplish their bet, it becomes true love. And up till now, you must know that this has to happen. The only curiosity left is the drop scene where they actually get to know that both are just making up their bets. This is all  How to lose a guy in 10 days is all about!

As typical as it can go, Andie at a movie theater out loud talking to her friend without any reason about her plan, and that’s the point where ben knows it all. After realizing the reality, he still acts normal and everything moves on a little further. Finally, at the party, he takes Andie with him and after a little bit of drama, she also gets to know about ben’s bet. Both of them argued then and there and parted their ways.

Andie denies writing anymore on “How to lose a guy in 10 days” instead wrote on “how she lost the one person she ever fell for” and quit the job. Ben somehow read the article and rush to find her in the middle of the road, and both confess their genuine feelings.

Things that How to Lose a Guy in 10 Days Have Taught Us!

Take some time and think when bets are a good option, they always hurt the feelings of the one person, might be a reason for someone’s trauma.

Love Has The Most Worth

The type of love movies portray, more or less didn’t happen in real life, how in the world it’s every time sudden, with the liar, a cheater, most probably the wrong person. Love is a heavy word.

Movies always come up with some crazy ideas about work-life and careers. This actually does not happen you have a proper workplace environment.

1. Gwyneth Paltrow was initially attached to star, with Mike Newell set to direct. 2. Kate Hudson’s star-making turn in Almost Famous, which netted her a Golden Globe, landed her the part of Andie Anderson.

3. Because of the 10-year age-gap between Hudson, 23, and Matthew McConaughey, 33, producers almost passed on The Wedding Planner star.

4. Hahn reflected on the casting processin an interview with EW, detailing her final audition with Hudson in front of Petrie and the studio.

5. The movie is based on a short cartoon book of the same name by Michele Alexander and Jeannie Long.

6. Andie’s two work BFFs Michele and Jeannie, Kathryn Hahn and Annie Parisse played them and their names were the same as authors.

7. Director Donald Petrie encouraged his leads to improvise, explaining in an interview with the BBC, “I’m very sneaky as a director. I’d go over to Kate and say, ‘OK, in this next take, don’t tell Matthew, but do this.’ She would do it. What’s great is that, because they’re such consummate professionals, they never break character. They just go with it. They just wing it. I never say ‘Cut!’ at the end of a scene.”

8. One of those improvised scenes is when Andie jumps on Ben and smothers him with kisses after introducing him to Krull, their dog. This lead to a genuinely surprised reaction from McConaughey.

9. Most of Hudson’s lines in the scene where Andie crashes Ben’s boy’s night were also unscripted, as well as the decision to throw the platter of veggies.

It’s a movie from 2003, a romantic comedy concept (rom-com), and many movies carry the same thought. The old idea of getting two persons in a forced romantic relationship with misunderstands on top of it. Which you were seeing from very long ago hundreds of times and maybe even more. These kinds of things only happen in movies like  How to lose a guy in 10 days, that a person uses others on purpose for their career building or personal interest and you ENJOY it, but in real life, it actually boils your head.

Secondly, such movies make you fantasize that getting with the wrong idea will somehow lead you to the right way in your life. You just can’t sow broccoli and have tomatoes at the end of the day just because you planted something. That something has to be crystal clear.

And finally, rocky relationships built by despicable people won’t get happy and healthy automatically at the end of the day. Either you change yourself or make some serious efforts in building an honest relationship. Otherwise, you keep stumbling from one toxic relationship to another unstable situation. Because in real life you can’t run away from your relationship, professional, personal problems, no matter how speedy your car is.

How to Draw Anime Effortlessly?
Pakistanis Angry After University Of Lahore Expels Students For Hugging On Campus
To Top