How Did The Peshawar Attack Change The Way We Think? 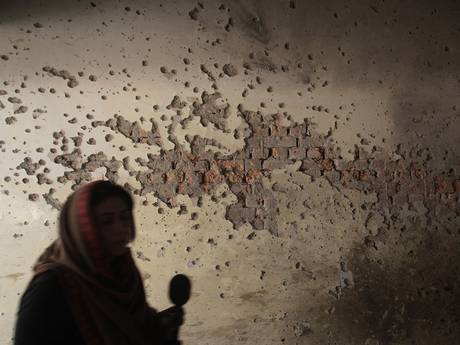 Army Public School Peshawar was crowded by thousands of people to mourn the death of 149 people, which mainly included children, killed by the Taliban.  The gatherers demanded action against the militants. Undoubtedly, the Peshawar attack was one of the deadliest attacks in the history of Pakistan. The crowed exhibited utter determination to jointly fight against terrorists. Women, children and men from Peshawar and various other cities visited Army Public School to offer prayers for the victims of the Peshawar attack.

“Mini 9/11” is how Pakistan has described the bloody rampage which happened on the 16th of December 2014. They also called it a game-changer in the fight against extremism.

The height of the boundary walls of the Army Public School, Peshawar was raised by the masons as the mourners chanted slogans: “Long Live Pakistan Army”, “Taliban Are Savages”, Death to Terrorists”, and “The blood of Martyrs will Not go Waste”.

One of the local residents of Peshawar who came to pray for the Peshawar attack victims, Imdad Hussain remarked: “What kind of a person can kill a child?” “What kind of justice is this, what kind of Islam is this?”. He urged the government to wipe out terrorists from Pakistan.

Shagufta Bibi, another one of the local residents said:  “First they attacked mosques, then markets and now they have started attacking schools. We cannot tolerate this. We can die but we will not let our children be killed.”  “I demand that the government close in on the terrorists and hang them in public.”

She voiced her concerned and felt that their kids are not safe anywhere, may it be parks, mosques or schools.

Following the Peshawar attack, condolences and tributes painted social media websites such as Facebook and Twitter. The Christmas celebrations were canceled by the Christian community in Pakistan. Instead, they will hold a service on the 25th of December, said Rev Patrick John of All Saints Church.

The militant attack was condemned by all the nations of the world and surprisingly it was condemned by many militant groups as well. The Afghan Taliban called the attack un-Islamic, while in a statement the Al- Qaeda (subcontinent) also expressed their grief over the event.

Al-Qaeda’s spokesman, Osama Mehmood said: “Our hearts are bursting with pain and grief over this incident.”

Following the Peshawar attack, Nawaz Sharif, the Prime Minister of Pakistan lifted the six-year moratorium on the death penalty for terrorism-related cases.

Two militants convicted of separate terrorism offenses were the first to be hanged. Aqil was convicted of an attack on the Army Headquarters in 2009 and Arshad Mehmood was sentenced for involvement in the assassination attempt on General Pervaiz Musharraf in 2003.

Human Rights Watch demanded the government not stop hanging the terrorists and termed the executions as “a craven politicized reaction to the Peshawar killings.”

Airports all around Pakistan were put on red alert as the Pakistan Army intensified operations against militants in the northwestern tribal areas of Pakistan which follow no laws.

According to the Taliban, the Peshawar attack on the school was to avenge the killings of the militants’ wives and children in that offensive.

Since June, the Pakistan Army has been waging the assault against the Taliban and other extremist groups.

The Pakistan Army has stepped up the fight against terrorism which is evident by the recent series of attacks on the militants, killing dozens of alleged militants.

The Pakistan Army has also been deployed to watch guard the imprisoned militants. As per the government officials, more executions will take place in the coming days.

Russia Considers an Attack On Israel if US Does Not Stop Interfering in Russian Black Sea.
School Kids in America Singing “Lab Pe Aati Hai Dua” [Video]
To Top