Wildlife is a significant part of the planet Earth. Several organizations, local and international, are toiling to protect them from illegal hunters in Pakistan. However, for the people who take hunting as a fun time-killing, these efforts mean nothing.

Last week Parhlo reported that a man in Dera Ismail Khan had killed hundreds of sparrows amid lockdown. And, now a guy from Malakand has killed a hooded crane.

Sad news from Thana, Malakand #kpk.Where a Hooded Crane has been killed by Mashar Khan and his friends.This was first ever sighting of this beautiful bird recorded in #pakistan which has now sadly become record of 1st ever hooded crane to have been illegally hunted on our land. pic.twitter.com/r41VVepzrk

As per the post, “This was first ever sighting of this beautiful bird recorded in Pakistan which has now sadly become a record of 1st ever hooded crane to have been illegally hunted on our land.” 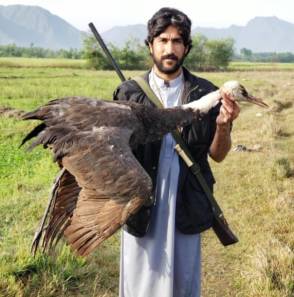 Malakand wildlife department and @dcmalakand are requested to apprehend this man to make him realise the severity of the crime committed and hand out severe penalties to stop them reoffending!His Facebook:https://t.co/iXRsCO1f7L pic.twitter.com/J7l5kD3WCf

Reportedly, a guy named ‘Mashar Khan’ in Malakan division of Khyber-Pakhtunkhwa (K-P) along with his friends hunted the precious bird.

However, it is not the first time in Pakistan when some illegally hunted birds and animals. Earlier, a man in Dera Ismail Khan had killed hundreds of sparrows amid lockdown. And, this incident was also reported in a tweet.

MASSACRE IN D.I.KHAN #KPK
Hundreds of sparrows were killed by this man Sajid and his accomplices in kulachi,All in the name of hunting and party!This is not hunting but genocide!Is mass slaughter of any species in such large numbers ethical or sustainable?When questioned he pic.twitter.com/Zj03c9m5ZR

Meanwhile, Sajid has been apprehended while a search to catch Mashar Khan is on. Moreover, he is being blatantly criticized for his brutality on social media now.

They believe as if they own wildlife

Mashar Khan+pals are another bunch of vile individuals who believe Wildlife is theirs for the killing.We are surrounded by those who don’t have the brains to understand when a species is rare, threatened,endangered or off limits to mindless killing.Illegally hunted into oblivion!

IDIOCRACY EPIDEMIC – SHAME on YOU pic.twitter.com/2c9JluW430

Yes, people are unaware of the importance of birds

Peoples are not aware about importance of birds which are rare throughout the world and even don’t know about the breeding season a it’s the responsibility of the government to look into this and lay down strict punishment for such acts.

Look! Over there! Something rare and beautiful! Quick, let’s kill it!… What possesses these people???

Meanwhile, the K-P forest department has failed in apprehending such culprits just like the Punjab forest department. Besides, such incidents depict the inhumane nature of such inhumane beings. So, the government must create rules and regulations to stop such incidents from happening in the future. Because only this way we can protect wildlife in Pakistan.

WATCH: Senior Citizens Ignore Govt SOPs As They Enter A Mosque To Pray
He Rides Over Tiger & Stops Plane With Bare Hands. Who’s This TikTok Star?
To Top