Honor Killing is a major drawback of our society. It is a sweeping dilemma succumb to our society and continues to prevail; the latest victim has lost the battle in Multan.

A certain kind of mindset is the breeding ground for such barbarism. With a prominent reason being intolerance leading to the birth of honor killing, there always require protest against it in all ways possible.

In Pakistan, honor killing has been around for far long. It tends to be a crucial practice in the rural areas. It directly unveils its prevalence to be in those areas and among those mindsets that are far illiterate.

Pakistan has suffered honor killing in abundance recently. 2016 has been a year tainted with many incidents of honor killing.

Efforts against honor killing have been rewarded with an Oscar, bill has been passed, but all to no avail after another incident took another life. The recent case is about a 17-year old girl, who was initially shot by her uncle in an honor killing attempt. The girl spent days of injuries and lost the battle of her life on Tuesday night in Multan.

SHO Rana Khalid reports that the outlaw Zahoor had a suspicion that his niece had a relation with a boy of their village. Zahoor reported that he committed the crime on the insistence of Ghulam Muhammad, the victim’s own grandfather.

Consequently, the police arrested both Zahoor and Ghulam Muhammad in the case of felony and murder.

This is the most recent case of honor killing. Previously, a number of major incidents have been reported. 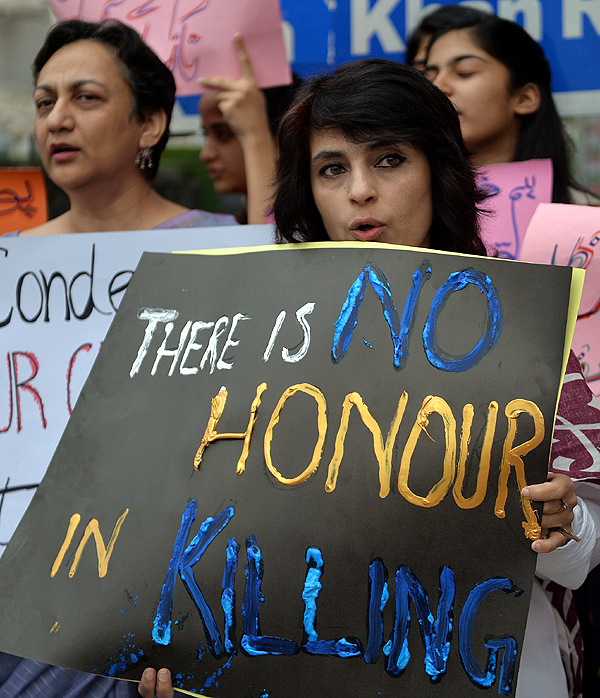 One Pakistani man killed 2 of his sisters the evening before their marriage because they both had chosen to get married on their choices rather than settling for arranged marriages.

A couple murdered in Lahore after they married without their families’ consent. 56-year-old Muhammad Ashraf murdered his own daughter Saba and her husband Karamat as well. The couple had returned to Lahore to reconcile their deteriorated relations with the family who were beyond displeased with them.

In another major incident, a mother killed her own daughter who was only 18 years of age after she married the person of her choice without the family’s approval. Her name was Zeenat Bibi who belonged to a low-income family who was set on fire and left to die.

Nobody from her neighborhood claimed her body and her husband buried her remains in the dark. Parveen Bibi, the killer of her daughter was reported to have stormed the neighborhood and shouted: “I have killed my daughter for misbehaving & giving our family a bad name.”

The intensity of these incidents simply shows how cheap is the value of life in minds of these people. It casts the shadow of this backdrop of our society and how deep it is tangled and how much more it will require to eradicate it.

Despite the court ruling against honor killing, events continue to happen. It directly hints at the need of changing mindsets in the urban and ghetto societies.

As long as such mindsets prevail, honor killing will not be hampered.

Attention All Smartphone Users: The Best App Ever Made Is Finally Here!
Here’s How Single People Feel When Their Friends Are Getting Married!
To Top