History Of Buddhism In Gilgit Baltistan Dates Far Back And It Can Boost Our Tourism|Parhlo.com

Pakistan’s culturally rich history triggers the increase in tourism. Individuals from all around the globe visit the country to get a taste of their religious backgrounds. This mostly includes Buddhists. The history of Buddhism in Gilgit Baltistan is no joke! The 7th-century Kargah Buddha figure in Gilgit is booming tourism. In addition, a museum regarding Buddha has been an immense hit among Buddhist countries like Japan and Sri Lanka, as well.

Details Of Buddhism In Pakistan – Why They Shouldn’t Be Ignored:

The figure is actually carved into a rock. Its location is close to the junction of Kargah and Shukogah rivulets, which seems to be about nine kilometers away from Gilgit city. Gilgit is rich with Buddhist history probably because of its location, and there is evidence that it had been a Buddhist center from the 3rd century to the 11th century. 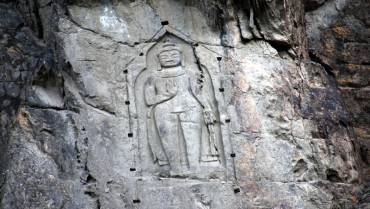 In 1938 or 1939, the Buddhist monastery and three stupas were discovered, along with the Sanskrit manuscripts in the early ’30s. This is impressive information because it shows the long-held connection of the religion with Gilgit city. Moreover, it gives it extra significance because considering the fact that even Buddhist caravans stayed in a monastery as they went through Gilgit, is a huge feat.

If this knowledge is properly spread, worldwide. Then, Buddhist countries will spend good money on Pakistan, visiting us to dwell into the past. So, it seems that about half a million tourists visited Gilgit just to witness their Buddhist history. Even though this is a piece of positive news as it boosts the country’s economy but there’s a downfall to it. The roads are extremely dangerous towards the Buddha site. Moreover, many tourists do not want to take the risk; which is understandable. It is important to take action for this as it will affect the positive impact of Buddhism in Pakistan, as barely any tourists would visit. 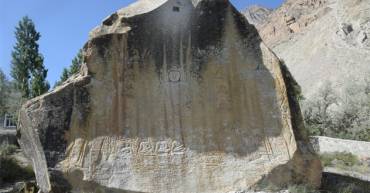 The Gilgit locals tend to share various myths about the figure. One of the residents Arshad Wali mentions a rather scary story surrounding the place. Apparently, an ogress named Yakhshini used to consume humans and the locals needed her out of the place, for obvious reasons. Then, they asked help from a saint. The saint then ‘pins’ the ogress to a rock. He added, “The saint declared that she would not bother them as long as he was alive. And if they buried him at the foothills of the rock, she would never be freed,”

Visiting the northern areas of Pakistan, the residents always have some mythical information concerning the place. Some connect Lake Saiful Muluk with fairies! Well, they are just rumors and fairytales but do tend to entice excitement within the visitors. Such backgrounds are important as well, as it makes the experience extraordinary for the tourists.

The site needs protection as its precious for the perseverance of Buddhism in Gilgit Baltistan, as well as Pakistan. Not to mention, such sites are rarely present in countries. So, it is always an advantage to gain benefits from past history, especially if it gives extra knowledge regarding a religion.

What do you think of the situation? Can Gilgit city use their monuments and Buddhist history to promote Pakistan as a culturally rich country that is worthy of visits? Share your thoughts!

The FBR Has Announced New Taxes On Marriage And Now Even Guests Will Pay To Eat At Weddings!
Shabnam Is An Amazing Highlight Of The Lux Style Awards And Even Had Saba Qamar Getting Emotional!
To Top