Ever since the great partition of the sub-continent in 1947, both Hindus and Muslims are hell-bent on stabbing in each other’s backs. Despite the loss of honor and humanity, there are some people from both faiths who are still clinging on to save whatever respect and harmony are left.

An example of which is the post of a Hindu boy, which illustrates the respect he has for Muslims and their religious practices. Showing his attempt to foster love and peace between both the communities. As Dalai Lama says: “Mutual Respect is the foundation of Genuine Harmony.” 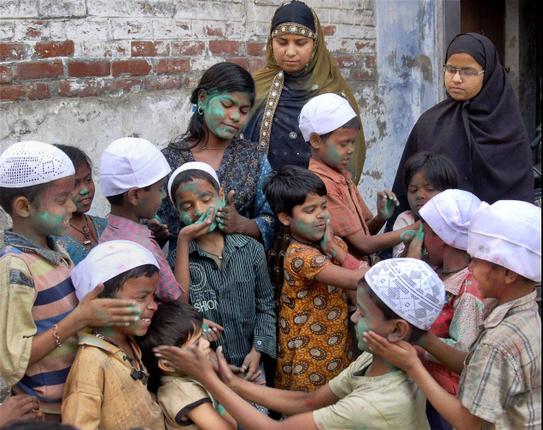 With people from both faiths misconceiving the love, a Hindu Boy stands apart by reflecting his upbringing. In his recent post on Facebook, Jaint shares that since his birth, his parents have always taught him to respect Muslims. Some of the sweet gestures he has mentioned are respecting AZAAN by turning off the music.

Following, greeting every Muslim with a Salam paying Salam, and replying ‘Namastey’ in return. Moreover, the boy shares his childhood illustrating that his family rejoices in the happiness of Muslims by celebrating the festival of Eid. During the period of Ramadan, the latter arranges Iftar and Sehri drives and not to forget sabeels during the grieving period of Muharram.

Jaint also mentions the love he has received from his fellow Muslim compatriots. Such as his female Muslim friends tieing Rakhi on the eve of Rakshabandhan.

Nevertheless, Jaint inspires others by saying that we as human beings must preach love and respect the embodiment of peace. This can only be done by respecting the faiths that exist in our society. Where people and constantly looking for moments to target and abuse each other’s religions, we can stand apart from them by inciting harmony and love.

Reviving The Embodiment Of Love!

Over the years, differences due to religion have greatly pestered the lifestyle of many. Religious intolerance and hatred towards Muslims from Hindus and vice versa is a common phenomenon found in this world.

In the past, there have been numerous occasions where people of both these religions have tarnished each other in every possible way. This is mostly due to the perception common as Hindus and Muslims cannot live with each other under one roof.

However, this is not always the case. As there are some people like Jaint who have done things that prove the fact that it is not religion that unites us. It is Humanity! Instead of using religion to create hate and divide we can find the better person is us by reviving the embodiment of love and peace, consequently leading to harmony.