There’s a major concern involving every cricketer that has played for Pakistan apart from their match performances and fitness. It’s none other than the ability to give a post-match interview following a victory or defeat, and we have seen in the bygone years how it has turned out. Where you couldn’t lift your head up from shame, you also found it hilarious how words blurt out of their mouths. But that kind of criticism is often harsh because you cannot expect players to prioritize anything besides their game. Anyway, years followed and we saw players no longer embarrassing themselves. They started delivering decent interviews and speeches and you almost couldn’t believe your eyes… 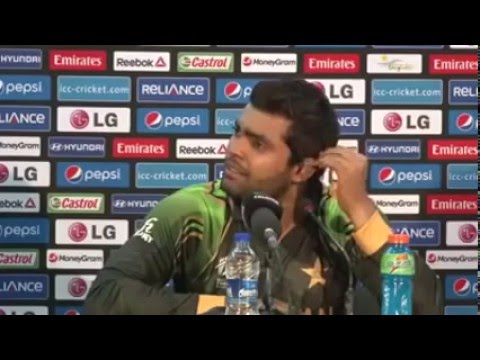 Not him, of course. But is it really necessary for our players to be fluent in speaking English? They always have a choice to speak in their mother tongue. It can be translated and it usually is a call for confidence. Good that now we often see our players speak freely in any language or style they wish to, regardless of feeling embarrassed about it. Just yesterday, we saw Hassan Ali delivering a post-match interview having Imad Wasim as a translator by his side. As Hassan answered questions in Urdu, Imad translated in English, and it was pretty cute how it went down.

See it for yourself…

I chuckled so hard when he said, “Steve Rixon ne bhagaya tujhe kal.” So cool and comfortable… Well, it’s nice that our team players are there for each other’s support.

…and people absolutely loved it!

Moment of the match: Hassan Ali in the man of the match ceremony to Imad Wasim “kuch bhi bol de” ?????? hahahahaha

Hassan Ali is such a cutie ??#pakvSA that man of the match interview tho ?????

Let’s congratulate Hassan Ali and Imad Wasim for making a staggering comeback after languishing against India. We hope to see similar performances and once again, these two lads should appear for a post-match interview because it’s absolutely priceless.

What do you guys think about Team Pakistan’s run so far in the ICC Champions Trophy 2017?

Ramadan Transmissions are Now a Joke!
The Way Pakistanis Reacted To Pakistan Team’s Performance Is Totally AMAZING!
To Top