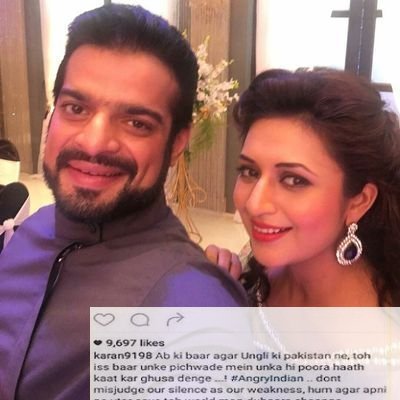 The growing tension between two rival countries of sub-continent has been talk of the town for sometime now. We have witnessed such phases between both states since our childhood. We are living among the people with different strata of patriotism.

Few of us are hardcore Pakistanis , won’t like to listen anything against our motherland and will be bursting like anything against India, and then there are people who are like we should behave and we should not bad mouth about our neighbors. Its all dirty politics People like me are little chilled about the things and try to react maturely.

I have been a great history and monument person. Being a student of archaeology and history, I had chances to study the different dynasties invading in South Asia and their remaining.

The Mughal architecture and monuments have been of great interest for me. Digging the roots, I realized there is another asset of history in India too. I so want to explore Indian archaeological sites and monuments and then the palaces and traditions of pink city i.e Jaipur.

Oh with all this did I tell you with a loyal viewer of my country’s television, I am also great admirer of Indian Television. Should I confess this in such circumstances? This is not about the stories they offer on TV but the way things are executed and the twists and turns are offered needs guts and class.

So being a TV person and believing as they say Arts and entertainment are apart boundaries and borders, I have appreciated the good things about their TV a lot.

So coming back to the crux of the story and recent rift the stance of different people was in news feed as well. The artists and celebrities whom we idealize a lot, mostly come to us as image crackers.

People who with their work and performance steal audience hearts and are source of entertainment and joy for masses, many times do not think about the things and do not ponder on their choice of words when comes to show their stance on some sensitive issues.

They have to consider all the charisma and aura they have been for the people through their work and products. All can go in vain dear stars.

One such example came from a robotic hero Karan Patel. He shared his anger in worst possible words against us, against Pakistan and the people on his Instagram account. 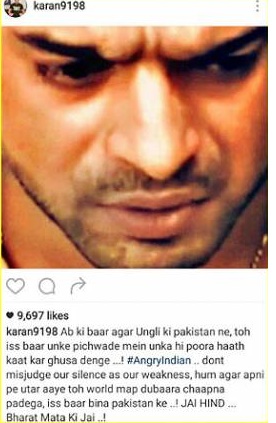 Although he apologized later but that was so uncalled for weirdo Raman. What were you thinking man? So it was your inner and real self? Talking in such abusive language to the masses? You have realized people that fictional characters are never real and are confined to the fantasy land only. I have never been a fan of your show or you actually keep wondering on the courage of someone who took the daring decision of launching you as Hero. But man you went too far this time. You have not hurt us as your words and even you do not matter and exist for us. But you have actually shown your upbringing, your way of dealing the things, your language and a stinky mind.

Let me tell you and the fellow who think your way, you guys need to follow up the Kashmir news and updates more often. You and whole industry noticed Uri attack but you fool asses do not see how brutally Indian Army is killing and ending lives of Kashmiris.

You can not see the women being rapped, the young men being martyred by your army and no one takes notice and shows concerns then. But once there is some sluggish news of Uri attacks you wake up abruptly and go insane on social media. Coward you are a show man and you better excel in your field.

Don’t tell others your stupid opinion which doesn’t even matter for us.

So people this was a shut call for you and all those who think Pakistan is guilty or so. We, at the end of the day are Pakistani and belong to this land and our love for your shows is not greater than our love for our motherland. Whoever will point his finger towards us will be given a hard slap on his face.

Hey dud or I should talk in your tone? Oh my God I so want to but I can not stoop that low, you better go for some grooming classes, you more look like a “sarrak chaap” guy than an actor.
Till next time keep in mind people, do you get that? You better do.

A Pakistani Photoshop Artist Edited A Girl’s Picture And The Result Is Mindblowing!
[QUIZ] – Do You Know The Capital Of These Countries?
To Top