Here's Why Atif Aslam’s Jal Pari Will Always Be A Timeless Work Of Art!

This article was submitted by Mohammad Nazar Syed

The year is 2004. Musharraf is the President. Imran Khan has one seat in the National Assembly and is mid-divorce with Jemima. Facebook is still something that hasn’t quite reached you. You’re re-reading the latest Harry Potter book in your bed (Harry Potter and the Order of the Phoenix). Your brother walks into the room. He just bought a 50rs cassette at Jumbo Books from around the corner. He takes out his copy of Bryan Adam’s MTV Unplugged from his cassette player and puts in Atif Aslam’s Jal Pari.

You whine and wail and tell him you’re reading but he asserts his birthright of being older and the music continues to play. He plays side B of the cassette and you sit with a sour look on your face.

The music swells. You hear a summer monsoon in the distance.

The song continues and the drums kick in like a battle cry for your heart. Nonetheless, you are forced to ask your brother about the song. “Who is that? What is that? Where has it come from?” He signals you to shush and you do. You let the whole track play. Then the next one. And then the one after that. 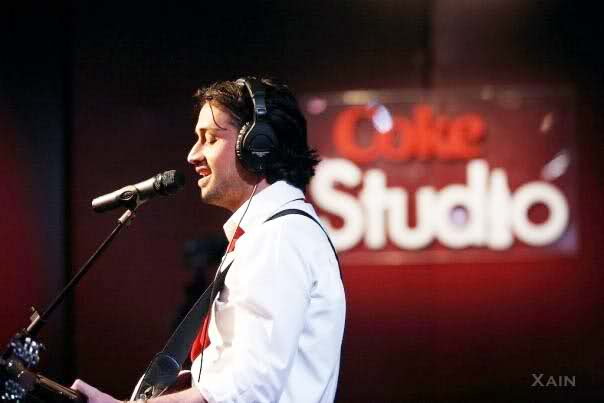 It’s 15 years later and you’re older and Atif Aslam is now an exportable superstar-rockstar sensation of the world.

You go through his discography on Patari, he still has some bangers. That one song from the Salman Khan movie, that other one from the Mahira Khan movie. But you can’t help and go back to Jal Pari.; that sonically resonant album that not only defined your teens but defined a whole generation.

Before the Bollywood takeover and the HumTV OST pop renaissance; before the Dil Diyyan Galla’s and the Taajdar-e-Haram’s and the horrible NFAK covers for corporate India, there was Atif Aslam’s Jal Pari. I wanted to revisit this masterpiece in all its glory, 15 years later.

Pakistani pop music has a handful of icons and even a fewer number of “artists”. Artists that are singer-songwriters, that pour their soul in at the words and the music before pouring themselves in the hands of the corporate world. Atif Aslam used to be that artist. The artist that after a horrible college break up, wrote a career-defining work of “art.” One that has stood the test of time.

Jal Pari doesn’t fit the model of Pakistani pop music of the early 2000s, although now, that’s all the 2000s are associated with.

Is it a folk album? Is it a rock album? Is it a pop album? The answer is yes. Jal Pari is the best bending of genres since Junoon’s 1997 hit, Azadi. It is the quintessential debut album; one every artist tries to make at least once in their life. Atif did it on his first try.

In the smokescreen of Bollywood’s evil autotune corporate agenda of “let’s lose our identity and make our worst music so it sells,” Atif Aslam’s Jal Pari sounds like an ironic, timeless work of art. Only because Atif became a part of that mechanism for a while. But if we rewind back to 2003-04, Atif and Gohar were supposed to be the Lennon and McCartney of the East.

Aadat by Jal was released in 2003. That song has its own fanbase and I could totally write a 10k word piece on Aadat alone but I digress. Sometimes we don’t realize how big that song was. Everybody and their cats had Aadat as their alarm tone, ringtone, caller tone – you name it! It inspired a whole generation to pick up the guitar and learn the famous guitar lick. Oh, you know exactly which one I’m talking about!

After that song, the duo was supposed to make their Abbey Road, their Sgt. Pepper’s, their Let It Be. But that didn’t happen. Egos came in way sooner than they should’ve and we got a solo Atif Aslam feature instead. Are we complaining? Not really.

Jal Pari is perfect from start to finish.

It’s one of those few albums that don’t have a bad song on it. Every song is a hit, per se. From the atmospheric titular track to the rockier “Rango mein,” to the heart wrenching “Yakeen”, Jal Pari has a track for every mood. And if that’s not a good omen for a timeless hit than I don’t know what is.

What I really wanted to get down to was the craftsmanship of the songs. Aadat, an acoustic-led ballad has the haunting presence of an Iris by the Goo Goo Dolls. (Gohar went on to cover Iris later in his career. I’ll spare you the pain, it ain’t good). Dil Haaray has one of the most recognizable guitar intros in Pakistani pop music, only behind Aadat. Mahi Ve has the boyish charm of – dare I say it – a boy band. Furthermore, Bheegi Yaadein is a straight-up rock anthem and even starts like Oasis’ Champagne Supernova! This album is straight-up ear galore.

The vocals are clear and sharp. The control Atif has in his voice is of a young padawan in training to be the next Jedi (NFAK being the Jedi in this case). The production is crisp and would’ve been nominated for a Grammy if Jal Pari were released on a western music label.

And finally, the writing. The non-cheesy straight from the heart truth evoking writing of Jal Pari crowns the album as spectacular.

There is poetry in the words in the way a teensy, angsty kid would relate to. And yet, it feels as grown-up as anything else that’s out right now. How did a 21-year-old Atif do it? We may never know. But all we know is he did and it was magnificent.

The truly euphoric Jal Pari marks the start of Atif Aslam and the near end of the album’s cyclic release of Pakistani Pop music. His subsequent 2 albums were also terrific but nothing happens if Jal Pari doesn’t happen.

If it were released today, it would still be iconic. And I think that’s the sign of a great album. With Jal Pari, we have a nostalgic album that feels fresh, a breakup album that feels rejoiceful and a debut album from an artist that feels like he was in the game for years. It gave us the Atif Aslam that we’ve learned to love and Jal Pari continues to be his best work until proven otherwise.

Do you agree? Let us know in the comments section below!