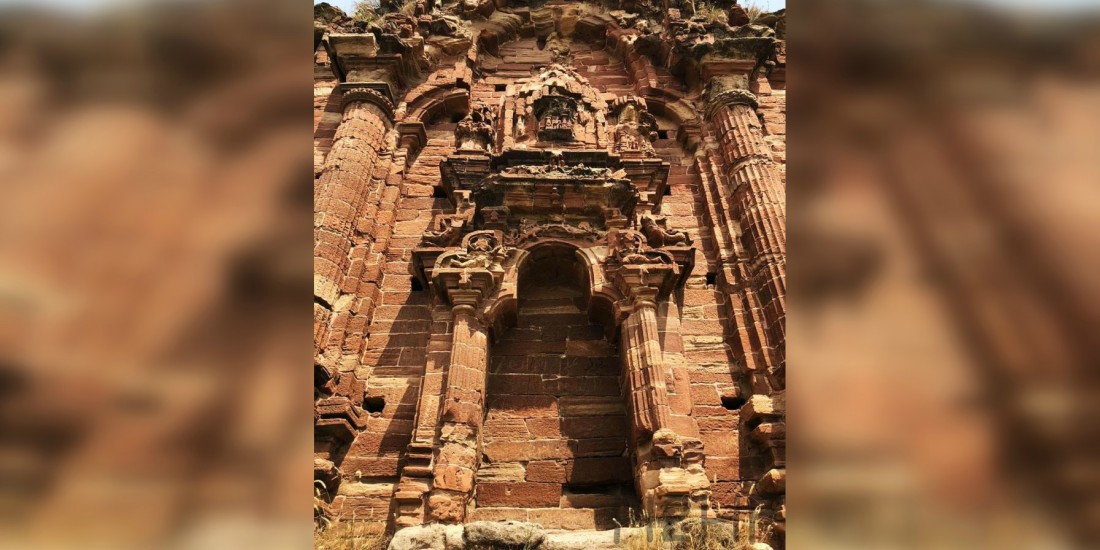 Our journey to Malot Fort and Dharab Dam started from Rawalpindi early in the morning, to beat the summer heat. We joined the motorway at Chakri interchange and after 2 hours, were at KalarKahar interchange. After Kalar Kahar, Malot village is just 15 km of the metalled road on Choa-malot direction. It’s in the last 15 minutes that the terrain becomes hilly and gypsum stone hills travel with you along the road.

The access to Malot fort had to be difficult and narrow, because of its military necessity, and it was. After winding between Coal mine dumps, jagged rocks and cement factories, we reached the foot of the ramp of Malot hill. This ramp rises about 300 m in 15 minutes and at the opposite end is the ort that sits on top of a flattened out plot of approximately 3 miles square. Just beyond this fort’s back wall, is a sheer drop of at least a thousand foot. On either side of this ramp are deep ravines that the fort was meant to keep eye on.

The first evidence of an old settlement was the typical watering hole and banyan tree for weary travelers. Then comes the steep climb towards the fort entrance, which is now just the two dilapidated towers. All the surrounding walls of this very important fort of the Janjua dynasty of the 10thcentury have been demolished. Evidence of reinforced walls and building rocks are strewn everywhere. The village of Malot has now become a town and it is encroaching on what was once the enclosure of the fort. What I don’t understand is where they get their water supply from. 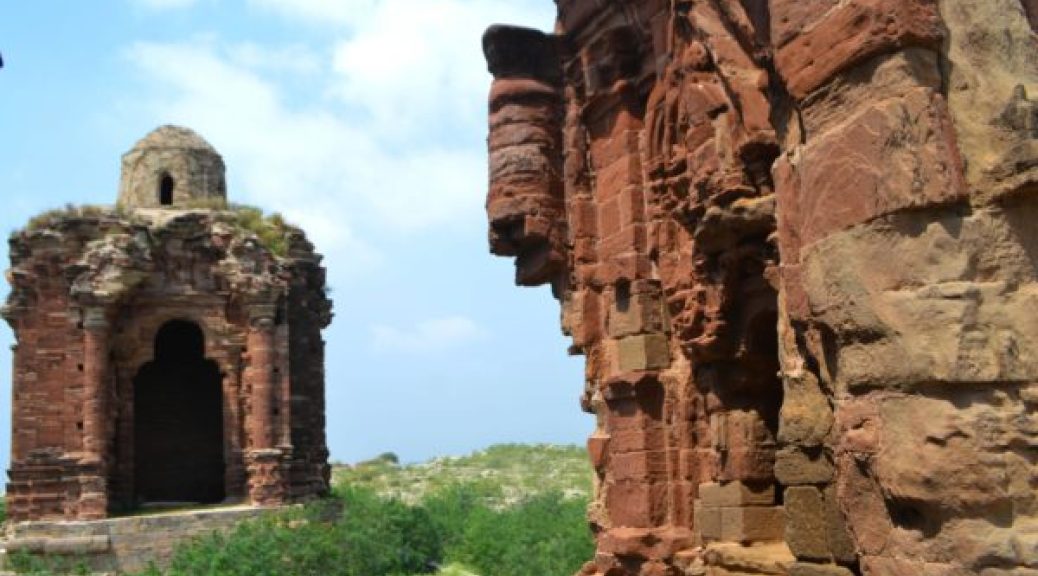 I was trying to find Turkish features in the residents of the town, considering the first builders of the fort were of Turk descent – none were visible.
Malot fort was the idea of a Hindu Janjua Rajput ruler of the 12th century, of this hilly part of Salt Range. Although, the fort itself, is dated around 980 AD.T his Raja Mal (Raja Ajmal Dev Janjua)was influenced by Sufi Islam and the local legend says he converted in 1005 during Afghan Shahabuddin’s raids. He tried to consolidate and regain what his ancestors had lost to Mahmoud Ghaznavi n 1005 AD. Local legend says that some of his sons did convert in 1178 during Shahabuddin Ghauri’s conquests here. 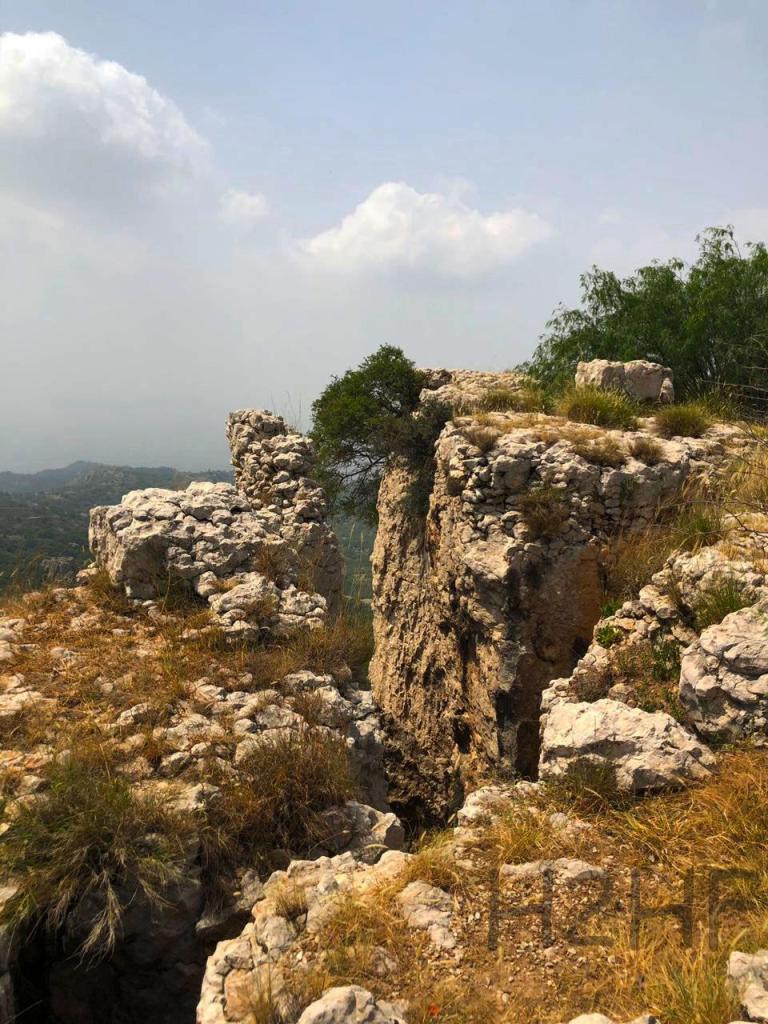 History also records Babar muscling this fort from Daulat Khan Lodhi in the 1526 – so it was pretty important to the rulers of Dehli. I guess they didn’t want bad guys sitting on the heights overlooking the fertile plains of Jhelum and Chenab. The fort itself is nowhere to be seen but the two Shiva Hindu temple buildings have survived. The temples have Greek styled figures carved in red sandstone. General Cunningham mentions the temples and their impressive architecture in his travelogue.

The far side cliff has finger-like rocks jutting out from thousand feet below that were probably search towers once. I can imagine Para gliders jumping off this cliff towards the canyon below. Standing on top of the Brahman priest’s altar, I could see the beautiful landscape of the Salt Range for several hundred miles.

I also saw the environmental damage caused by the cement plants about 20 km away; it wasn’t pretty. On the way back locals informed us that there are two natural water reservoirs around 20 km from Malot deep down inside a natural rock formation. The places are called Karoli & Neelwan. I intend to go there next time. 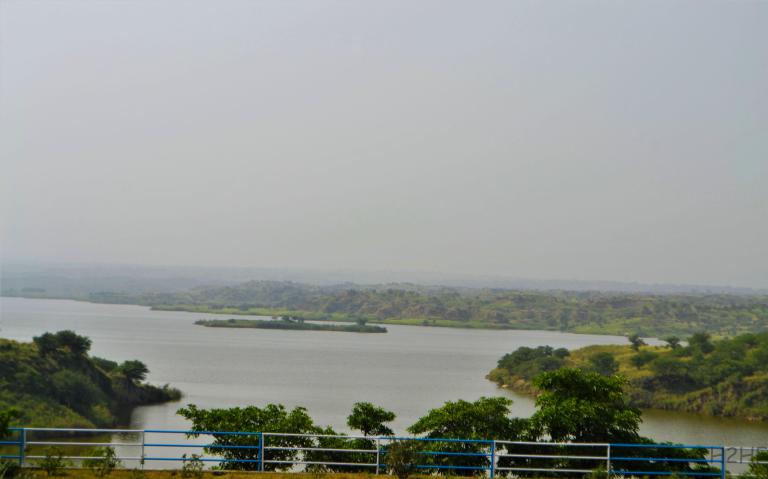 After Malot, we climbed back on the motorway, drove to Balkassar interchange, exited and turned towards the Talagang side. As soon as we turned away from Chakwal, by crossing over the motorway, we took a narrow road that leads towards Dharab Dam. There is a signboard right at the turning pointing towards the dam. The best part of the dam is the Islamabad club side, but the dirt track leading to that edge is washed away and even 4x4s cannot go there. The only option was to go to the irrigation guest house side, which is a 15 minutes’ drive on a metalled road.

The irrigation people had locked the gate of their guest house; luckily, I knew how to pick locks and simply drove right up to their parking. They have a very nice Guava farm where you can have your lunch, freshen up and walk to the Dam viewing point close by. This dam was built for irrigation but doesn’t do much of irrigation because the agri land is higher than the reservoir.

It was a beautiful sight to see! They even have fish in the water but no one to arrange fishing or boating. This place is a potential gem for tourists and water sports fanatics, but nothing like that has been developed yet. We drove back 2 hours to Rawalpindi and are planning another trip to Kahoon valley of this picturesque valley next time.

Read Also: Here’s Why These 5 Gorgeous Locations In Pakistan Have to Be Your Next Vacation Spots