Here's What Happens In The Mind Of Maulana Sherani 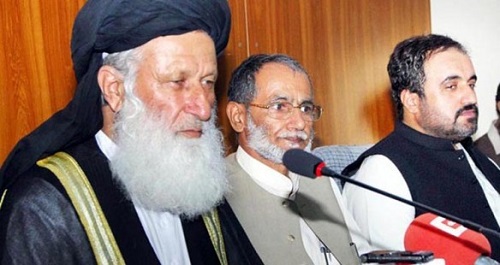 Everyone has a bad day at office at some time or the other, no? I have worked so hard all my life to get free halwa and them tikkas. But everything  is falling apart.

First attack on my halwa warehouse came as a shock; my mujahid brigade had always been successful in protecting the basic right of all husbands but alas! Those pests at the Punjab Assembly got their way. What buffoonery is this? Why would anyone try to punish man for keeping his women in line? Doesn’t Rana Sanaullah see his wife and get that tingling urge to beat the shit out of her? I think his wife isn’t beautiful enough and he is taking his frustration out on us.

I couldn’t sleep for days while the news sank in. It was a very dark time and I would have gone into depression had it not been for the sohan halwa sent by Seth Manzoor.

It hasn’t been long since the great debacle of Lahore and we have another issue at hand. It probably wouldn’t have hurt as much if a woman hadn’t initially proposed these new laws.

What is happening in Islamabad? Can’t these libtards see the “Islam” in Islamabad’s name which stands for Sherani’s Dera? Maybe these burgers are too busy calling it “Isloo”. How will punishing a father for killing a daughter for committing the unforgivable sin (read: wearing jeans) help the society?

I cannot standby silently while they justify the murder of an innocent man who just wanted to send his daughter to heaven for all eternity! And these heartless men and women did not stop at this. They saw blood and wanted more.

Maybe it’s time I give up this thankless job of oppressing women and go on a halwa sabbatical. But the lure of the prados and sending pressers to news channels stops me, Wallah not for personal gain but for the betterment of Islam. Anyway, what was I thinking?

Ah yes! The amendment in the rape laws. Making use of DNA as primary evidence….DNA! Don’t they realise that DNA tests were a joint venture between Jews and Mr McMahon of RAW designed specifically to malign our pious Pakistani men so that they cannot pursue jihad against their evil plans to make Pakistan a peaceful secular country? Such fools. I must do something.

This cannot keep happening. What’s next? Allowing women to drive…wait that is already allowed. Shit, SHIT!

Here Is Why Muslims Should Observe Fasts On 9th and 10th Muharram
The Question Of “Will The Lives Of Shias Ever Matter?” Continues Making Headlines
To Top