A few days ago, the news of Czech woman detained at the Lahore airport for smuggling drugs from Lahore was seen all over the social media. The 21-year-old Tereza Hzulkova, in an attempt to smuggle heroin from Lahore to Dubai, was caught by the authorities.

In the interrogation, however, there is a twist in the story, it has been revealed that Tereza initially came to Pakistan for modeling purpose.

According to Tereza’s friend Simona, both friends traveled to Pakistan for the same purpose. Simona shared that Tereza was in touch with a certain Tariq while she was with her in Pakistan.

However, something was just not right and Simona shared that with a daily tabloid newspaper of Prague called Blesk. She stated that for just the shoot, Tereza received 200,000 Czech Krona, equal to rs1 million.

Simona further shared that Tereza was in touch with Tariq throughout her time in Pakistan. “My boss will arrange for us to take pictures in Pakistan.” This is what Tereza said while referring to Tariq in front of Simona.

About three weeks before Tereza, Simona shared that she was in Pakistan too but she was there for the purpose of taking pictures only. “I came back totally okay and I am stunned by what happened. We were photographed together across Europe, as I say, I did not expect anything like that to happen. I loved her, but now I have a different opinion. ” 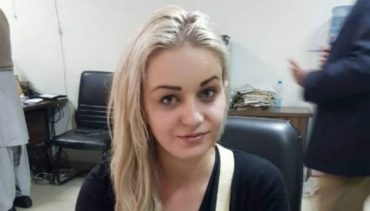 However, Simona still hasn’t revealed if she was in Pakistan the same time Tereza was here. “I don’t wish to express myself,” she said to the tabloid.

Tereza is currently on a 14-days judicial remand after the Special Court sent her to jail on the 12th of January.