Here's How Tape Ball Cricket Is Played In Pakistan 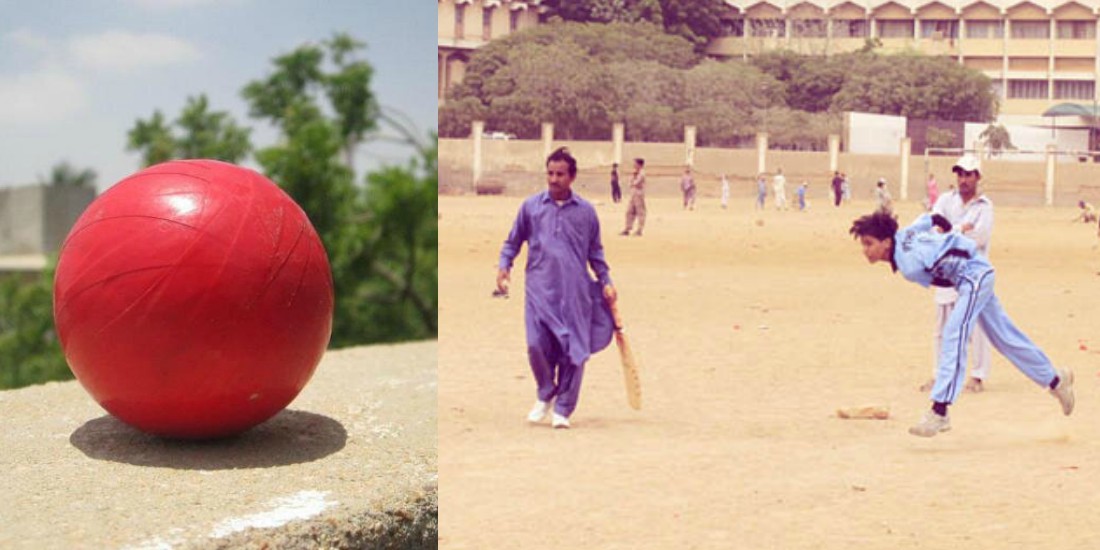 The passion for cricket in Pakistan is undeniable. Be it watching or playing, Pakistanis are crazy about cricket. There is a Shahid Afridi in every Pakistani. Cricket is a high budget game but we have a good solution for that, the Tapeball Cricket. It does not require a helmet, gloves or kneepad. Almost every Pakistani plays tape ball cricket growing up. 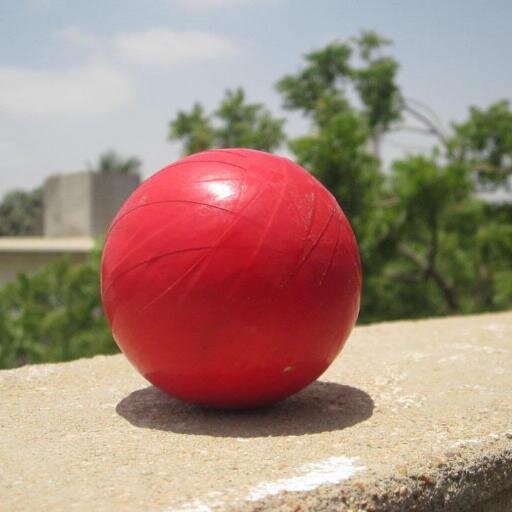 A tennis ball is wrapped in an electrical tape. A seam is also presented on it by same or different colored tape. After some smashing, ball requires to be re-taped. There is a taping master in every team who is asked to tape the ball. The bat used in this form of cricket is usually very light and consists of a longer handle than hard willows. 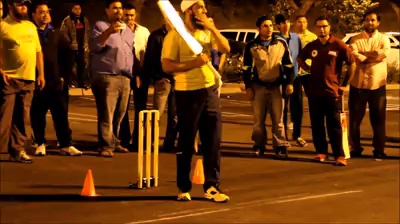 The pitch size in tape ball cricket is not constant. It varies very much. Tapeball cricket pitch is not measured in meters. A guy usually measures the pitch size by his footsteps by walking on the pitch. The pitch is usually 20 to 22 steps long. You can imagine that how pitch size can vary depending upon the steps of different persons. 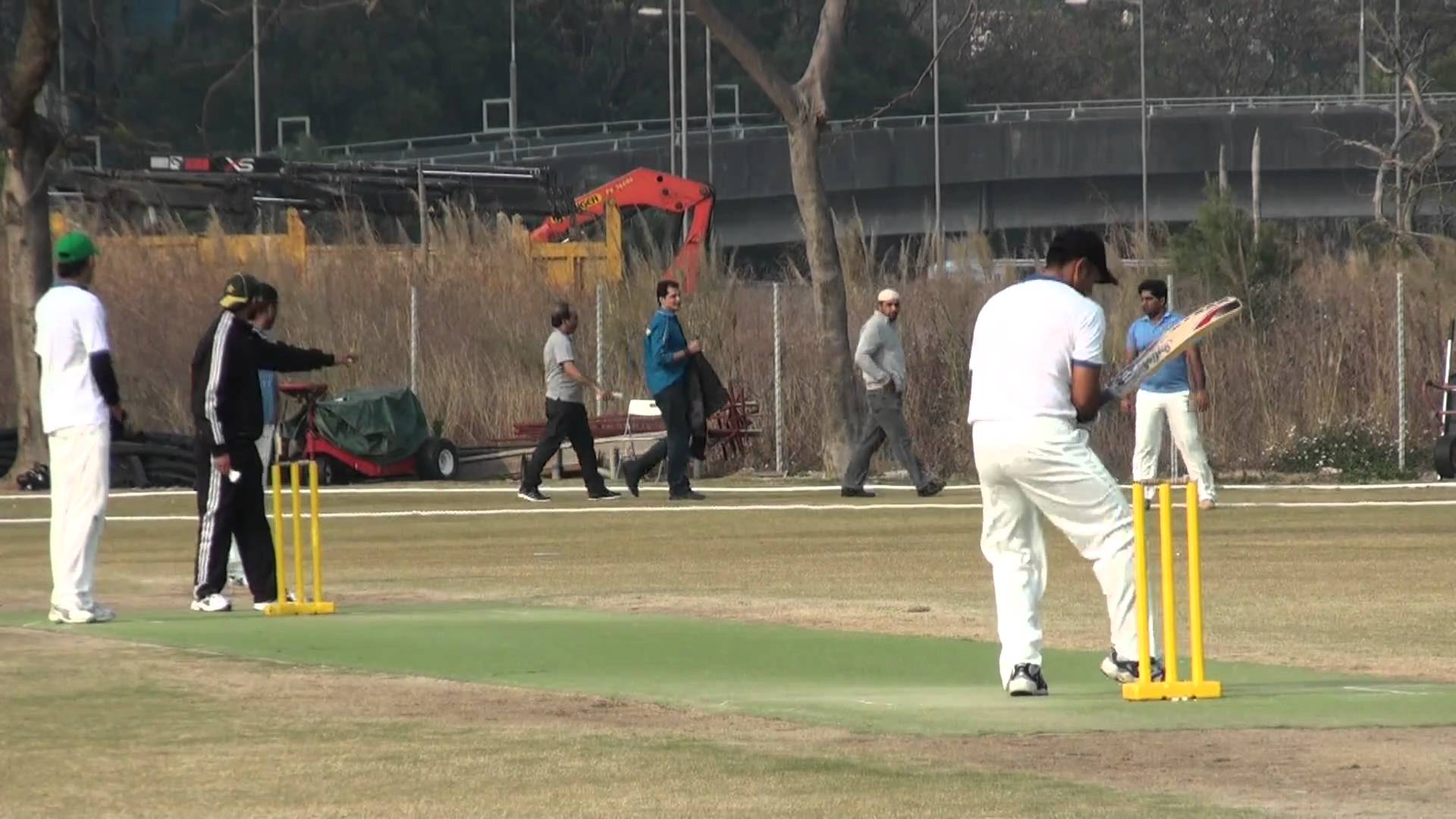 Boundary line is formed by stones or bricks or marked with a white powder in case of tournaments. The boundary is 50 or more meters long. Boundary range is dependent on a number of players on each side. If there are 5 or 6 players each side, the boundary starts from straightish long off to square leg. By the addition of 2 or 3 players backward square leg and the extra cover comes into play. And boundary range maximizes to 360 degrees if there are eleven players in each side. 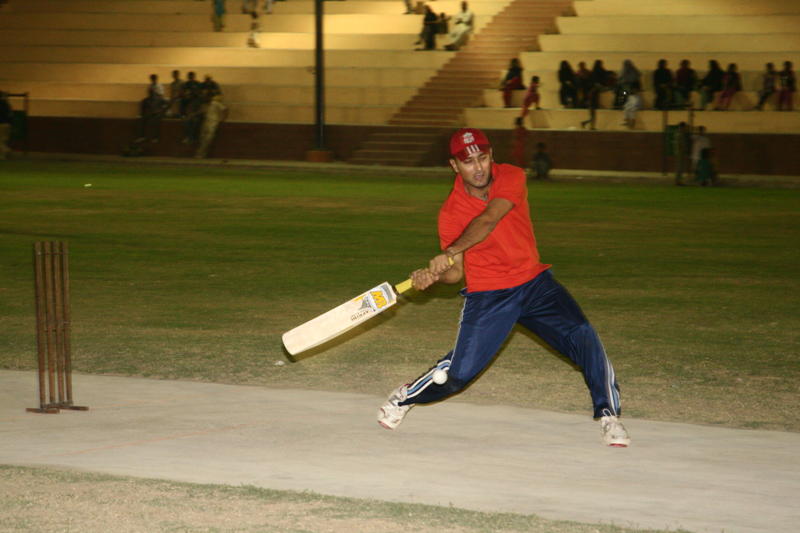 A match can consist of 4 to 8 overs. There is no such thing as ball-sighting in tape ball cricket. Batsmen just start from 1st ball. Sometimes there is a “try ball” before the first ball which can be called a sighter. 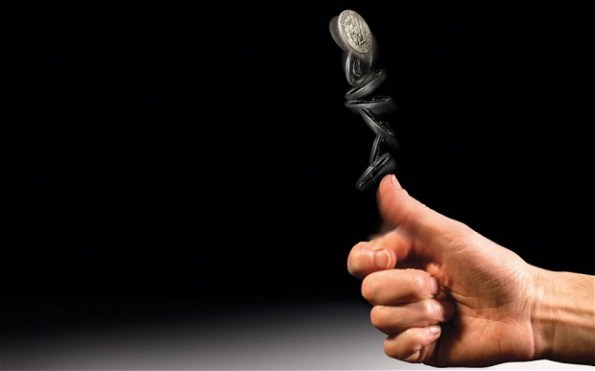 Toss is done by 1,2 or 5 rupee coins but they are not always available. So there is an interesting toss in tape ball cricket. It is done by electrical tape. Tape roll is flicked in the air like a coin by a captain and the other one has to call it “up” or “down” ( up being the side having the brand name of tape parallel to the ground and down being the antiparallel side). Toss is redone if tape lands on its edge.

There are many types of wickets in tape ball cricket. These include normal wooden stumps but without bails, flat stones set-up vertically, iron grill wicket, Pepsi bottle containers and the one made of bricks. Usually, 12 bricks are needed to set up a wicket good enough. If the budget is good then wooden stumps are the first choice. But most of the times the budget is for balls and tapes. So there is only one wicket on striker’s end and on non-striker’s end, there is a stone or brick (yes! Run out at that end is difficult). 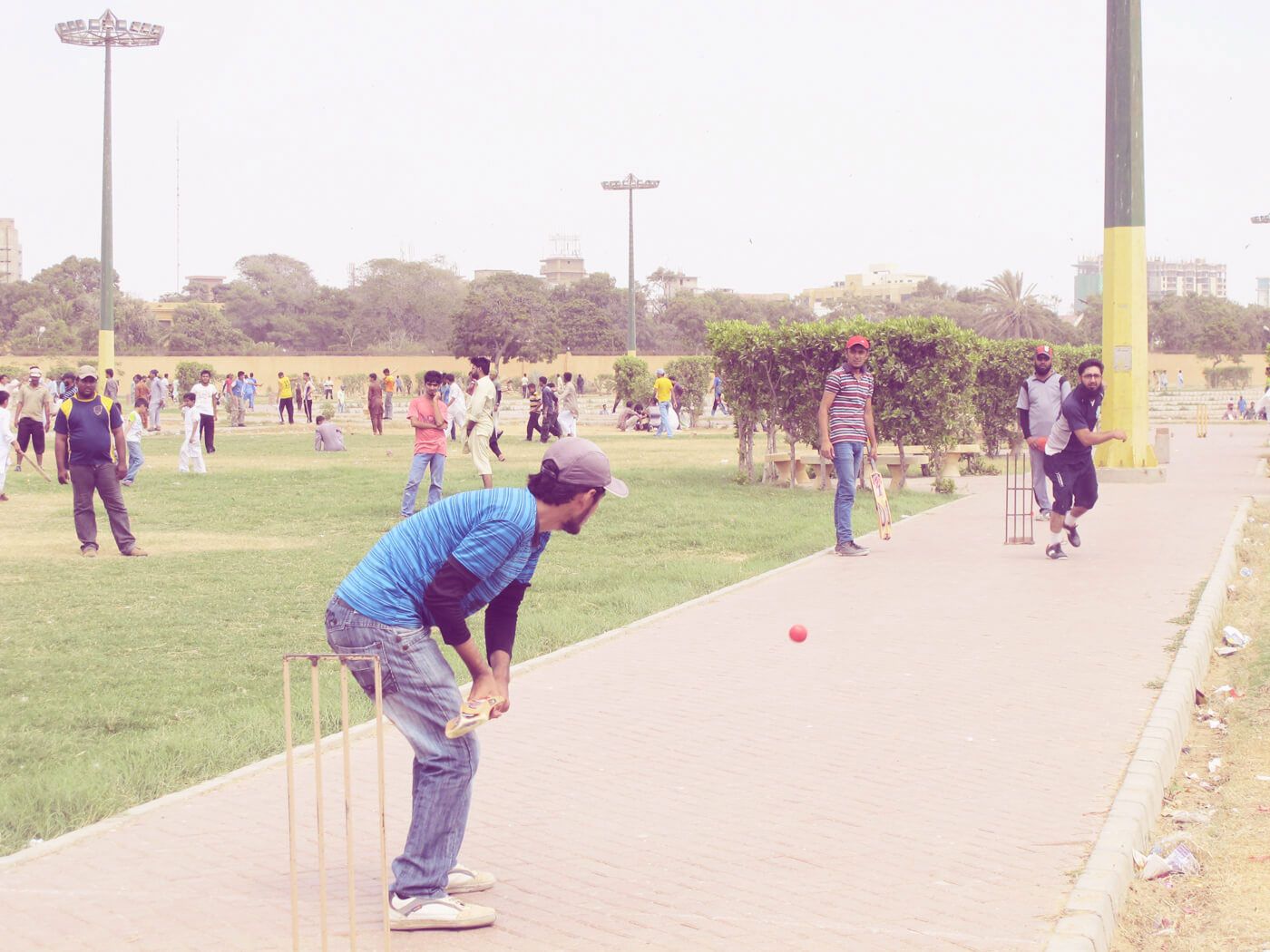 There are many rules which differ from original cricket rules like the distance of tramline from wicket is shorter (about 1.8 ft).

Shorter format of cricket is undoubtedly batsman’s game but tape ball is more in favor of batsman as: 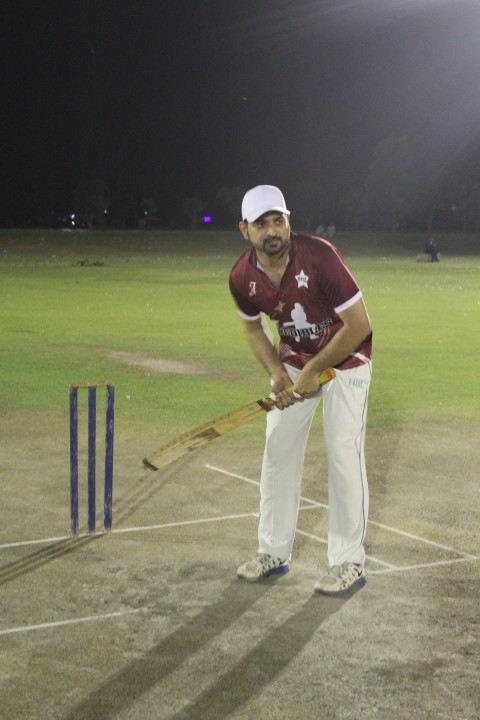 One +point for the bowler is field placement.  There’s no such thing as field restriction in this form of cricket. A bowler can place all his fielders at the Boundary line. The other one is obviously his set of skills. And conceding 12-15 runs in an over is normal.

Some batsmen in tape ball cricket who are successful at scoring runs use the following technique: They bat very deep increase centimeters away from the wicket. They play shots using their wrists more than anything. If the ball is pitched up they can flick it. In the case of length ball, they play on the up. Fast hands are the key here. If the ball is short or a bumper, they slighty transfer their weight behind because tape ball slows down if bowler tries to bowl it shorter. So batsman has enough time to pummel it over the leg side, swat it down the ground or forehand it over the offside.

Spin is not very much encouraged in tape ball cricket. All the talk is about pace in this form. It has become a myth in some regions that you cannot take the wicket or stop the run flow with spin. This is a totally incorrect statement. I once saw a young left-arm orthodox spinner bowled a 2 run over to a batsman who hit 5 sixes in next over of fast bowler. The best thing about that spinner was his control over the ball. He just varied the pace so peacefully. And most of the time batsmen were early into shots against him. Spin is the way to go in tape ball. In tape ball cricket, batsmen play wristy shots. If you take pace off the ball, there is no way ball is traveling to the boundary. If spinner gets hit for a six he bowls the next ball faster and batsman then easily hit another six. This has caused the demise of spin in tape ball cricket. So spin can be very effective if bowled with calmness and smartness. 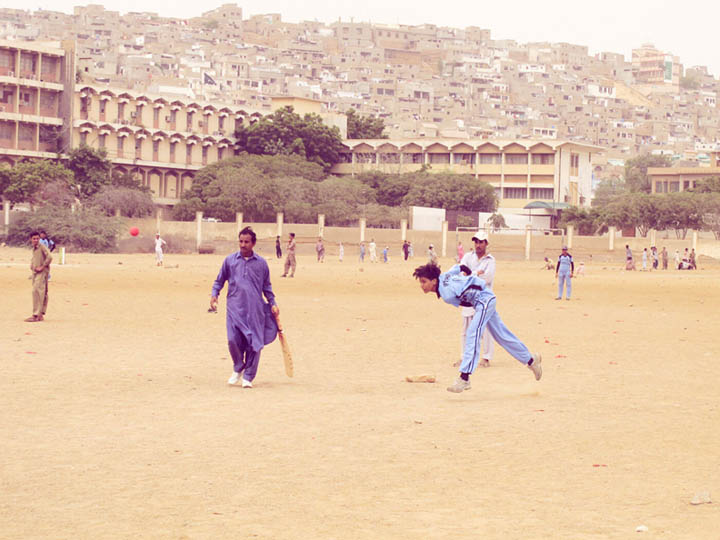 The captains in this format are mostly all-rounders. They bowl the first over and come to bat at #1. They are also wicket-keepers as they keep wickets when they are not bowling. These types of captains get furious when a bowler bowls half volleys or full tosses and ask them to bowl shorter. But when they to bowl, they do the exact same thing.

When a senior player is batting alongside a junior one, there is no trusting the junior thing. Senior sometimes gets the single of the penultimate or last ball of the over to retain strike. It’s not always like that. The trust comes out of nowhere when seniors get out. If only one or twp juniors are left for the batting as last man alone is allowed sometimes, then seniors become their runners and ask the exact juniors to put the bat on the ball give the team a few runs by scoring singles and doubles. If the last man is left only, then he or his runner has to run two as there is no single for the last man. So shot has to be that far to run 2. 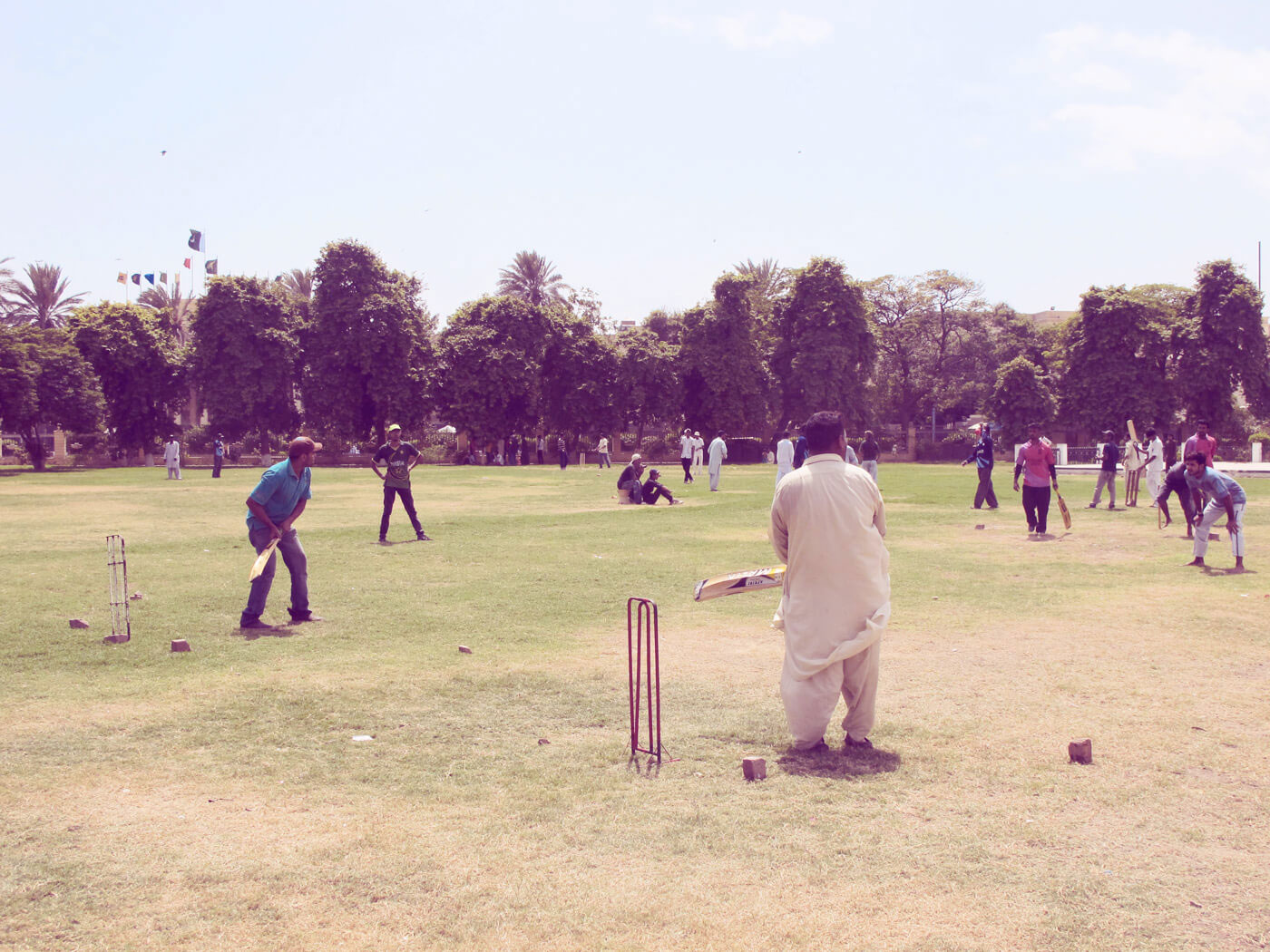 Nowadays, some fast bowlers are using the slower ball effectively and it is the only way to survive. As most batsmen play wristy shots, the pace is not the option because they easily flick these rockets with the smallest effort to the boundary. There is not much follow-through of the shots. If a bowler bowls a slower bowl effectively without changing bowling action, these wristy players are mostly early into the shot, cannot get power behind it to go over the boundary or they suffer throigh wrist lock and eventually missing the ball. So slower balls can be very useful. The bowler should avoid slower bouncers (off-cutters) because they will give very much time to the batsman to baseball-swing it far far away.

To survive in this format, one should be an all-rounder. All-rounders are more successful because there is a good chance that you perform in at least one area. Tapeball does not hurt badly due to its elasticity but batting stance should not be very open to welcome injuries. Batsman should not shuffle more often because tape ball bowlers with short runups are bloody pacy. To survive as a batsman, check drive is a very good option to hit a straight six as there is so much space on the ball. And as a bowler, you need to snatch the pace of the ball.

Tapeball cricket is of great enjoyment. It can be played with the minimum of 8 players total, a tennis ball,  an electrical tape, a bat and some bricks ( easily available ). It’s an amazing game and has amazing little contests which make it even beautiful.