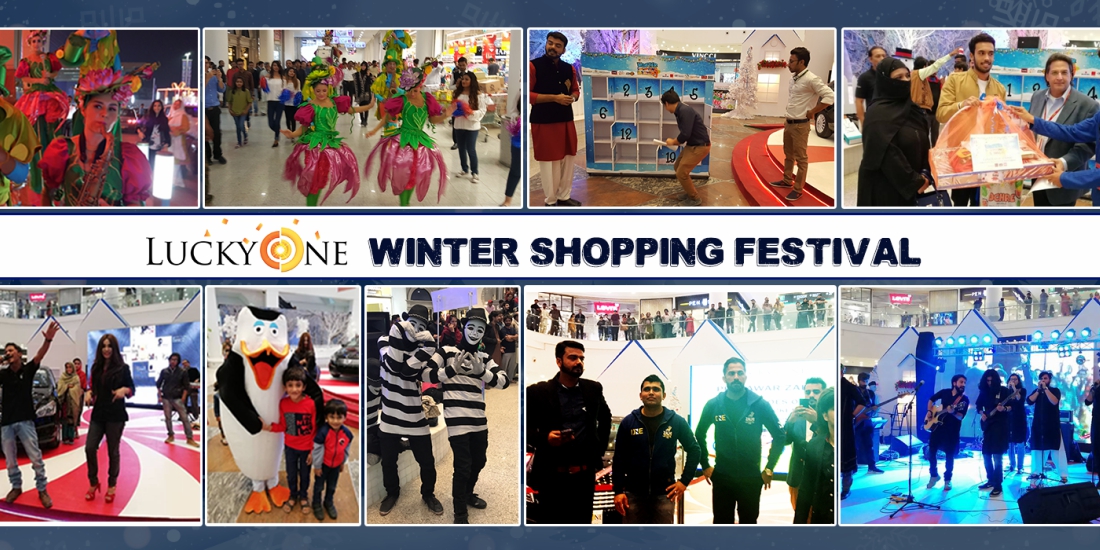 2018 came in with a gush of worth cherishing surprises and festivities, do you agree? Well, you have all the reasons to agree now having LuckyOne Mall as the center of all celebrations & undying fun!

While everyone was glued to planning their New Year resolution and fantastic Christmas gifts for all their loved ones, LuckyOne Mall was busy sketching an outburst of awesome amazement for all the shoppers for their Winter Shopping Festival. Flipping the idea of celebrations has never been witnessed before by shopping malls with extravagant entertainment and rewarding December and January to impress all attendees, LuckyOne Mall became the hub of exciting surprises.

The mall was decked up with giant winter-themed decorations and displays to refresh the feel of pleasure and joyfulness for people to experience a unique festival celebration. The enthusiastic and glamour coated celebrations began on the 20th of December 2017 and were vibrant until the 10th of January, 2018, disclosing multiple mind-blowing surprises each day. Giving the shoppers a surprising and refreshing start of the new year, Lucky One Mall gives something new every day, keeping alive the excitement and curiosity and the fun experience whilst shopping.

“What further breaks the ice is a way to DISCOUNT all your expenses! LuckOne Mall picks the perfect timing for making it as big as it could get by announcing mega and irresistibly tempting discounts on more than 100 brands coming as a perfect, more than asked beginning of 2018. Along with staggering discounts, a mind engaging lucky draw was deployed for people shopping worth 10k, with promising and breathtaking giveaway including 3 Suzuki Ciaz.

The show does not conclude here but further extends with an avalanche of eccentric activities such as a charming performance by Darvesh and Sounds of Kolachi, in the honor of an unforgettable legend, Muhammad Ali Jinnah, on the 25th December 2017. While LuckyOne Mall pre-dominantly has become the shopper’s entertainment hub, it also became an opportunity avenue for all talented people. Lucky One got TALENT invited people from all walks of life to show what they have got and earn an instant recognition with rewarding gifts” says Danesh N. Dubash, General Manager Marketing.

To make it more exhilarating and rousing for the shoppers, the New Year countdown was inducted with in-mall fireworks, inaugurating a stimulating environment, accompanied by a Grand Parade, a special flashmob bringing forth Mentalist & Illusionist. Catering to the interests of all sorts of shoppers, LuckyOne Mall organized an exclusive Grand Musical Flower Parade, with performers originating from UAE, UK & Columbia, happened four times a day, making sure no one missed out. With a magic wand swayed by LuckyOne Mall this 2018, many wished came true especially with the mesmerizing chance of driving away your dream car by winning a lucky draw. The enticing revolutionary series of joy concluded on the 10th of January 2018, leaving behind memories to be cherished forever, with a grand finale and prize distribution ceremony you wish you hadn’t missed.

What a remarkable conclusion to a fest that won the hearts of millions. Hats off to the fantastic show put up by Lucky One Mall. To appreciate their commendable efforts, share your pictures at the mall with hashtag #LSWFat the enclosed link and show how you were part of the fabulous activities.