Here's How Bollywood Celebrities Are Mourning the Death of Asma Jahangir in an Honorable Manner! 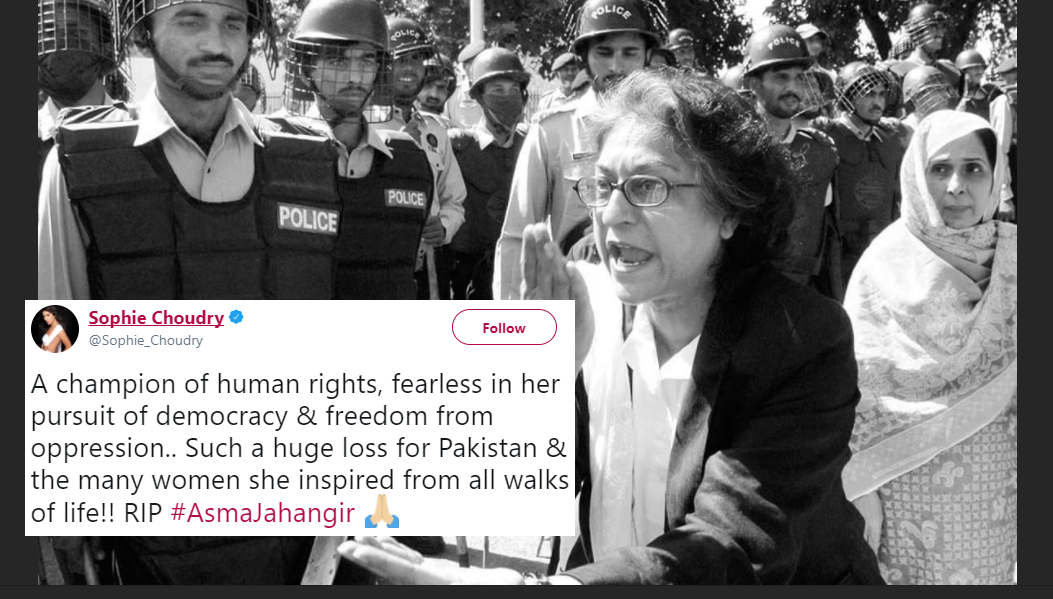 Human rights activist and a prominent, brave Pakistani lawyer Asma Jahangir last breath yesterday and since then, the entire world is mourning her death. People may have disagreements with her, but one thing is for certain, Asma Jahangir left a deeper mark in the world.

She fought for what was her stance from day one. She stood for what she said. Asma Jahangir was an example of what it seems to have a different opinion in a system that may not always agree with you.

On 11th February 2018, not only did Pakistan lose a gem, but the entire world did. Those who watched Asma Jahangir knew exactly what she was doing for the human rights.

A male friend once asked: why is #AsmaJahangir always so angry? What disturbed him perhaps was why she always spoke up and appeared utterly unafraid in this world dominated by masculinity’s apoplectic id. For me, this is what #AsmaJahangir was: she was brave enough to be angry.

‘Speaking truth to power’ a phrase, we often use. #AsmaJahangir lived,practiced till her last breath. Questioned mullahs, military, judges, politicians, all the powerful;defended downtrodden. Faced threats &
attacks. Was never afraid.What a hero. We have to contend with a void. pic.twitter.com/NFamtObL0s

Sad day given tragic loss of #AsmaJahangir the #HRC Special Rapporteur on Iran. A champion of #humanrights particular for women and religious minorities, who previously served as SR of freedom of religion. Sincere condolences! pic.twitter.com/EQoEAIziCR

The Death of Asma Jahangir has Also Left Bollywood Celebs In Awe – Who Now Honor her Legacy!

From One Advocate to Another

Deeply shocked & saddened to hear of #AsmaJahangir. She was a true defender of #HumanRights #Democracy & fought till her last breath against authoritarian power, orthodoxy & discriminatn. She was & will remain an inspiration A huge loss. Condolences to all whose lives she touched pic.twitter.com/FtR6HnFbIf

Asma Jahangir , undoubtedly the bravest and the most resilient fighter for human rights who had the courage to face the wrath of the dictators and the fury of the fundamentalist Mulla has passed away . It is the loss of the whole Sub continent .

Her Efforts Will Never Go Unnoticed

Just heard the devastating news that #Asma Jehangir passed away.She was a friend for who’s values integrity and courage I have the deepest respect. Pakistan has lost its most fearless crusader and the human rights movement its tallest leader. Our deepest condolences to the family

She Most Definitely Did

An extraordinary woman who fought for ordinary people. Asmaji had the audacity and the courage to fight for a fairer world. Thank you for touching our lives. ??? pic.twitter.com/wML94XmtcI

Here's to dearest @Asma_Jahangir – icon, feminist, voice of extreme courage, and above all my dearest friend. Her daughter @MunizaeJahangir tells me "she spent all her time looking after other people, never herself". We are in shock, will miss you terribly. #AsmaJehangir pic.twitter.com/pr1hckN7tO

She Inspired Everyone, Everywhere

A champion of human rights, fearless in her pursuit of democracy & freedom from oppression.. Such a huge loss for Pakistan & the many women she inspired from all walks of life!! RIP #AsmaJahangir ??

Pakistan Censor Board Bans “Padman” and the Locals are Not Happy At All!
This Guy Reveals how an MQM MNA Pointed a Gun at Him on a Busy Street in Karachi
To Top