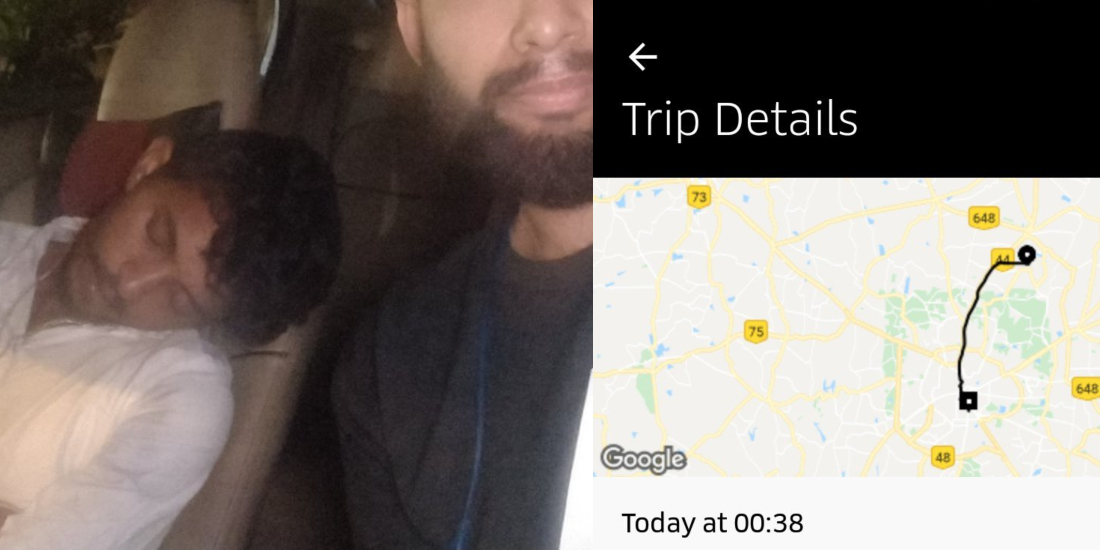 When it comes to travel we always want the coziest ride and comfortable away. We all have that one friend who always goes out of its way to do things when it comes to traveling. Like making a playlist of all the right songs, picking the good snacks, wearing the easiest clothes! But then there are others who we like to call light travelers. They just get up take whatever clothes, brush, shampoo comes in their hand and go. But either the kind, we all want our trips to be the nicest and safest, just the minor of turbulence will shake your whole experience. no?

But this guy had a pretty “shaky” experience! This guy named Surya booked an Uber from the airport to his home, but what happened during his ride was very risky!

At the end of his ride, he took a selfie!

@Uber_India, the ride back from Bangalore airport was not quite what I expected. The driver was drunk and drowsy. I had to pull the car over to the side and I drove all the way home. Pic with the driver in the rider seat passed out.
You need to fix this @Uber , @Uber_Support pic.twitter.com/G7LB0caeTM

While the shocking part was that his driver was not just drunk but so drunk that he didn’t even realize that he’s being recorded!

Here's a video of the driver who was drunk enough to not know he was being recorded. He was not the driver claimed by the app either. pic.twitter.com/IPnwBkTZ7R

Surya made sure that he sent all the details to Uber so that they can take corrective measures and that no one else should go through this!

@UberINSupport – DM'ed the details.@dkhos – this driver behavior needs to be caught and handled as it is a very serious safety issue.
This is most common to and from airports at night in India. Having a person checking for this before starting trip should be doable.@Uber_India

Uber being super responsible did respond to his queries, BUT 20 hours later 😀 *slow claps*

Uber safety team promptly called back about 20 hours later. They said I shouldn't drive a cab because that's a safety issue. And that they'll educate the driver whatever that means and might terminate the driver if there's recurrence.#sorrynotsorry @UberINSupport @Uber_India

Lol. A sober person with stable driving ability driving a car is a safety issue. And a drunk driver is eligible to drive.

*cheer claps* You must be awarded boi!

"If there is a recurrence?". Nomenclature for – let him actually kill a passenger before we talk about banning the driver from the platform. :Slow Claps @Uber_India

Uber had become shit! similar incident with me in delhi and they did not pay heed!

Hello Soumya, please note that in such cases, you can always trigger the 'Emergency' option located in the app, while an ongoing trip, to directly get into touch with us. Please drop us a note via the 'Help' section, so we can take up this issue.

Uh-ho! That too failed?! Uber needs to come with some good strategy now. Surri bro!

What would you do if you were at his place? Let it be “safe” and let the drunk driver take you home or save each other’s lives and you drive sober?