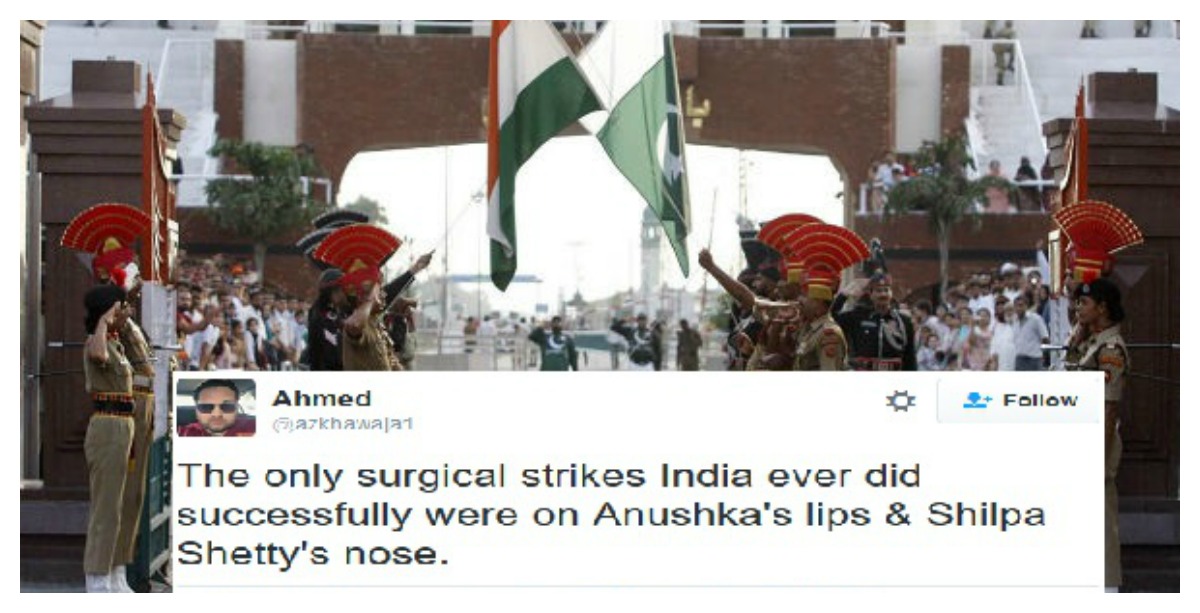 Earlier today Indians were seeing celebrating surgical strikes done by their army on militants in Pakistan, although the claim was refuted by Pakistan army. But Indians celebrated on Twitter like they had found a fast bowler. Pakistanis didn’t stay behind and replied strongly to their claims of a surgical strike in Pakistan.

Indians need to remember this one.

Pakistan has done many surgical strikes on India, this, the most important one.

Remember when Shoaib Malik conducted a surgical strike in India, in 2010?

He was proud of his boys. Little did he know that Pakistanis are not going to spare him.

Ouch. This was literally savage.

Too bad they played well again at home ground. https://t.co/gIeQLjJYbC

Pakistan doesn't even need to do surgical strikes your jokes will kill Indians anyway. https://t.co/MZjReH7JnL

The only surgical strikes India ever did successfully were on Anushka's lips & Shilpa Shetty's nose.

Indian chief: "Commandos, prepare for a strike against Pakistan."

Great plan by Modi to contain India's ever growing population, will get half of them killed by Pakistani army.

Pakistan has devastated India with strikes like these many times in the history.

Or that guy who tells his friends he is dating the hottest girl in his college when he goes to an all boys college.

Must appreciate the enemy where due. India's surgical strike was so stealth even the commandos doing it didn't come to know of it.

The only place where they can strike..

For a country whose army copies video game covers. What can you say about it?

After copying movies and music, India is now copying the covers of video games. Btw that's a H&K HK416, not even used by Indian Army pic.twitter.com/F4nQsGULRQ

This surgical strike was brought to you by Ekta Kapoor.

The only way India can strike Pakistan is movies.

And those movies in which they name Katrina “Nawaz Mistry” and portray Saif Ali Khan as a war hero.

There is one strike the Indians can do.

The only strike Indians can successfully do is a hunger strike.

The greatest of them all.

The best surgical strike in the history of Indo-Pak relations. pic.twitter.com/StdWcB75Vw

We Pakistanis would like to congratulate Indians on the successful surgical strikes done by them on all sorts of social media.

Time for Talent to Spark And Earn Again As YouTube Officially Launches in Pakistan
Instead of Talking Nonsense, This Is How Pakistanis Need To Fight India
To Top