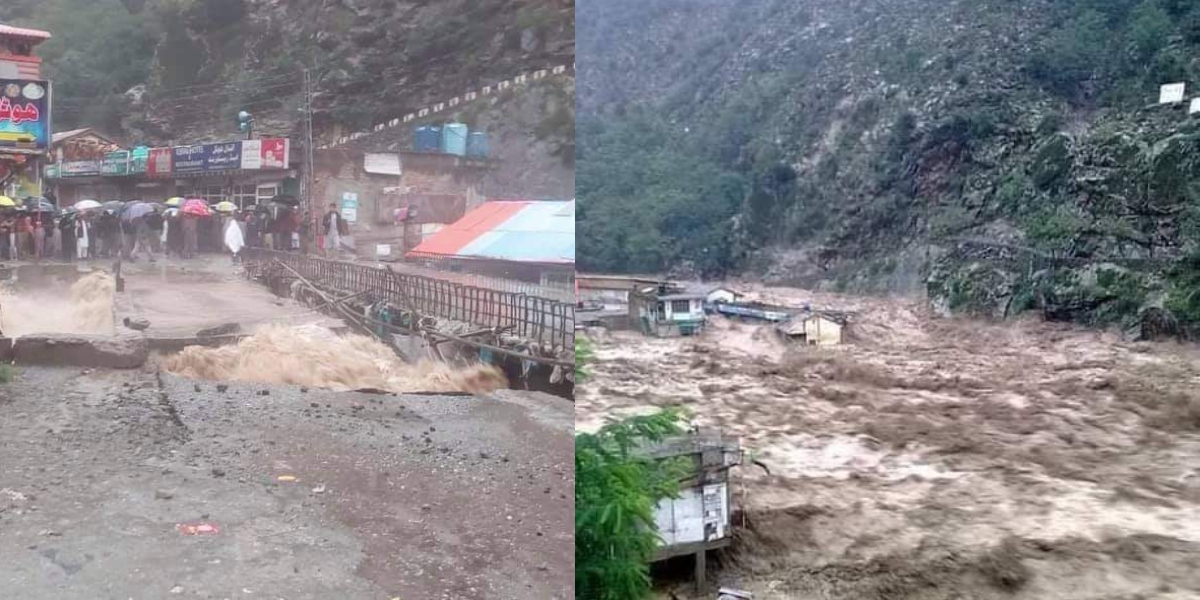 The recent flash floods in the Swat valley have devastated the lives of the residents as the water level rises in the river. The floods have swept away all the houses, hotels, and restaurants in the middle of Swat River.

The water level in the Swat River has risen to an alarming level. It has forced the people living near the river to vacate their houses and move to safer places due to the threat of flooding.

According to reports, four people were washed away by flash floods in Swat. The bodies of the three people were fished out while the Rescue 1122 launched efforts to recover the body of the woman.

The fast-moving floodwater swept away nearly 12 bridges in its way. It also damaged several fish farms. Electricity supply was suspended in Kanju when the floodwater washed away an electricity pole. Madain, Bahrain, and Kalam were also cut off from the rest of the province after the floods. The locals and the tourists have started moving to safer places. Intermittent rain has been lashing Swat for the last two days. The flow of water was 81,000 cusec in the Swat River at Kanju.

Chairman of District Development Advisory Committee Fazal Hakim Khan Yousafzai asked the district administration to stay alert to cope with the threat of impending floods in the district. He asked the Tehsil Municipal Administration, Irrigation Department, Rescue 1122, police and other line departments to pull up socks to deal with the looming danger.

Social media users in Pakistan express their pain on the devastation caused by the flash floods in Swat as the river water rises. Many users are criticizing the K-P government’s negligence.

Floods in Chitral forces people to live on hills

Apart from Swat, the floods also hit Chitral. Recent floods in ​​Chitral’s northern district of K-P destroyed houses that people had built after the 2019 floods. News floods forced residents to spend the flood night on the hills. It also had a devastating impact on the 100 houses in the village of Upper Chitral. People are not happy to live on hills as the flood in Chitral swept their homes.

Furthermore, the floods have caused severe damage to infrastructure, but according to the district administration, no casualties have been reported. Apart from the houses, the link bridge connecting Upper and Lower Chitral has also been washed away.

Pakistan has not experienced such devastating floods since 2010. It is not only Karachi that has been devastated by urban flooding due to heavy rainfall. The far-flung areas of Pakistan including K-P are also impacted by the rain. Moreover, the government is unable to develop any mechanism to curb this natural calamity.

Govt Approves Cannabis (Bhang) License For Industrial And Medical Use In Pakistan
Dear Girls! Beware Of This Creepy Guy If You Are Going For Hiking On Trail 5 In Islamabad
To Top