A Lawyer Tried To Go Against 'VIP Culture', but This Happened Instead... 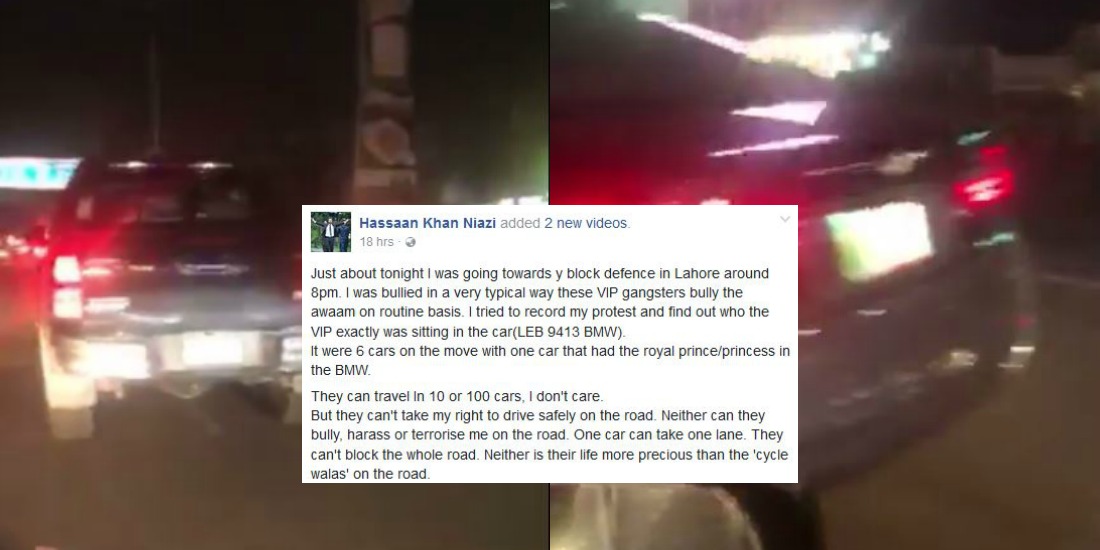 Barrister Hassaan Khan Niazi, famously known as the lawyer of Khadija Khan who was stabbed 23 times, met a VIP protocol and decided to take action. The VIP culture is on the rise these days. People have become frustrated now. They hate the idea of being stopped so that an aristocrat can “securely” travel to their destination. Slogans have been raised and political protest rallies have also called for an end to such culture that accommodates just one family while the general public poorly suffer. Like few people who tend to rise to a cause, Hassaan Khan Niazi also took it upon himself to raise awareness and expose the harsh reality of this street culture. However, did he execute it perfectly?

Watch the video to find out:

“Just about tonight I was going towards y block defence in Lahore around 8pm. I was bullied in a very typical way these VIP gangsters bully the awaam on routine basis. I tried to record my protest and find out who the VIP exactly was sitting in the car(LEB 9413 BMW).
It were 6 cars on the move with one car that had the royal prince/princess in the BMW.

They can travel In 10 or 100 cars, I don’t care.
But they can’t take my right to drive safely on the road. Neither can they bully, harass or terrorise me on the road. One car can take one lane. They can’t block the whole road. Neither is their life more precious than the ‘cycle walas’ on the road.
In the video you will have glimpse of the later half of the encounter I had with them. Yes, I tried to stop them but at the same time I was being careful of getting shot by their private guards in their private cars. They had the loud sirens which only official cars of state can have(normally police and ambulances only). My car even got hit from the left side with the footpath when they tried to scare me away, by force and terror.

Thing is, neither can they terrorise us. Nor will we get terrorised. We will fight back. Thanks to the modern technology and social media. We are no slaves. We will protest. We should embarrass them so they can’t face the public.

I want to register my complaint to police tomorrow. For that I want to find out who are these ‘badmash’ who are above the law. Who think they are special and superior to the other citizens.

The number plater of BMW(dark blue I think) is: LEB 9413
The owner of car belongs to company called
STANDARD GAS LIMITED. Need to find out the the owner

Hassaan Khan Niazi might be honest when trying to expose a VIP culture. However, was is it the right way to handle the situation? Overtaking traffic from the left side can easily be seen. People who are not aware of what is going on are being overtaken by someone who is focusing more on his video recording rather than the road. At one point he even overtook a vehicle from the left while it was indicating to turn left. Next, we see how every other vehicle that the VIP protocol pass are being ignored and treated normally while on his vehicle is being subject to horns and abuses and restricting overtake by bringing security car in an adjacent lane.

Such security movement, may it be for private or government officials, tend to drive in a single lane and are trained to keep their cars right next to concerned party and ranting the security can turn situation sideways. No matter how important it is to end VIP culture, it is also important that the way we end it is a positive one rather than negative as portrayed in the video. Stay safe while driving on road!

This E-Learning App is so good that you will never go for Tuition again!
7 Things That Make The Will Of Hazrat Ali A Perfect Guideline For Muslims
To Top