The famous comedian Hasan Minhaj was denied entry to a rally by the Indian Prime Minister Narendra Modi. The event was taking place at the NRG Stadium in Houston, Texas.

Why Was He Denied Entry?

The comedian even posted a picture of himself standing outside the venue. The reason for the denied entry is still unclear but it seems that the authorities mentioned that he didn’t have press credentials. Another reason cited that there was a limited space within the venue to accommodate the broadcast crew.

Many users on social media believe that the reason could clearly be something different as well. Hasan Minhaj has dedicated a couple of his show’s episodes to calling out Modi. He is well-known for his sarcastic and politically sensitive comments especially against President Trump and the Indian Prime Minister.

Moreover, he also stood up for the on-going atrocities within Kashmir and addressed that India should not celebrate the independence day. But the Indian citizens should focus more on the strenuous crisis that the region of Kashmir is going through right now. 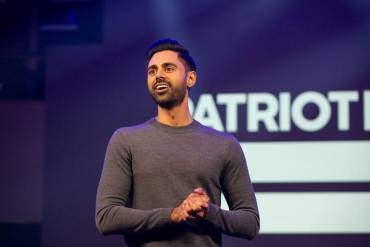 The handler of the event, Adam Matthew Weiss, took to social media to upload a couple of videos that showed Minhaj being denied entry. Once again, Weiss stresses the reason for denial to be a lack of credentials and space to accommodate the comedian’s crew. However, many people are mentioning that the venue looks as if it does have enough space for Minhaj and his broadcast crew.

This is also proved through looking at the videos posted by Weiss himself. So it doesn’t make sense to simply deny him entry just like that; there has to be a political motive behind it.

Is There Any Proof That The Real Reason For Denying Entry Is False?

A newswire updated on Twitter regarding the videos and called the action as “Islamophobic”.

The Twitter account named as ‘sparrow media’ also took the opportunity to mention, “Worth noting that these videos were posted to Instagram by one of the event’s publicists, Adam Weiss; who in addition to flacking for Jeanine Pirro, Donald Trump & a laundry list of fascist clients like Milo Yiannopoulos; he’s also stupid enough to post this”

The account handled by an activist named as Andy Stepanian then decided to post pictures of the venue handler Weiss with controversial figures like Milo Yiannopoulos and Steve Bannon. Both of them are commonly known for being Islamophobic and have promoted negativity against the religion of Islam. In short, the two are dedicated supporters of President Trump, who is a prominent problematic figure.

All of such updates do seem to complete the puzzle pieces but there has been no response from the comedian himself. He is still silent regarding the particular issue. However, there is a great chance that he might address this concern in his up-coming shows.

What do you think of the situation? Do you think that the official reason of denying Minhaj entry to the venue is correct? Or is there another underlying motive behind it? Share your thoughts using the links below.

7 Posh Schools Of Pakistan That Give Your Children A ‘Burger’ Environment!
Swvl Is Making Its Way To Karachi By Providing Utmost Ease & Comfort To All Its Travelers!
To Top