Couple photoshoots have become quite common and it is a way to not only have a fun experience with your significant other but also have that moment captured in photos for them to remember forever; also to post them on every social media platform that exists, filling our timelines with intimate pictures that we can’t unsee. No shade.

Recently, the much raved about couple Hasan and wife Samiya did a photoshoot that has gone viral. Pakistani cricketer Hasan gained much attention from the people when they found out that the young pacer will be following the footsteps of Shoaib Malik in regards to choosing a life partner. 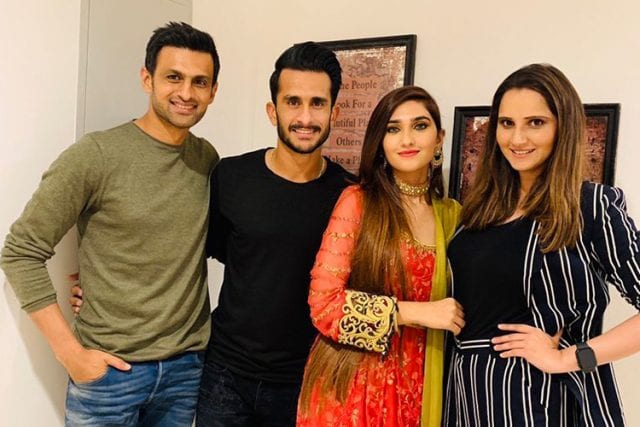 The embarrassing and probing questions that Hasan had to answer at his presser was nothing short of entertainment. Needless to say, their journey of coming together in nikah was witnessed by the entire country.

Hasan’s bold declaration of love to his Indian wife on Twitter backfired as it seemed he didn’t quite think the whole message through, inviting a flood of criticism not just from Pakistanis but from his fans too. Similarly, this recent photoshoot was no exception either.

Their photoshoot was not everyone’s cup of tea!

Hasan Ali and wife did a pre-wedding photoshoot in Dubai that was met with adoration, however, this shoot didn’t sit well with several and they resorted to schooling and criticizing the ‘married’ couple on being openly bold with their poses.

This lad wrote, “Wasim Akram was right when he said that cricketer’s belonging from the lower class of the society become hard to control when they gain fame and wealth.”

Apparently, he needs to check with the South African cricketer Hashim Amla and take some modesty lessons from him.

Dear Hassan Ali, These moments are personal type and required privacy…….it's not the show time……please keep these with yourself limit and take a lesson from Hasham Amla pic.twitter.com/dmfZyBs97J

LOL! WWE Championship wouldn’t have occurred to us. Apt!

According to the emojis, it’s a roast and a compliment, both? Confusing.

Hasan Ali, a show-off and Afridi a true legend. Interesting!

This is called true legend.❤ #Gentleman😍❤
Not show off as Hasan Ali 😒😒😐😑@RealHa55an pic.twitter.com/UcjZ2CW92M

A lot of the people found this recent photoshoot to be cringy and distasteful. Pakistanis are quite blunt in their opinions and with the recent convenience to sit behind a keyboard has armed them with the power to fire away all sorts of comments. Nonetheless, we wish Hasan Ali and wife all the best for their many photoshoots to come.

Punjab Lady Constable Resigns After Seeing No Signs Of Justice In This Cruel System!
17-Year-Old Hunain’s Helpless Parents Are Demanding Justice & It Is Absolutely Heart-Wrenching!
To Top