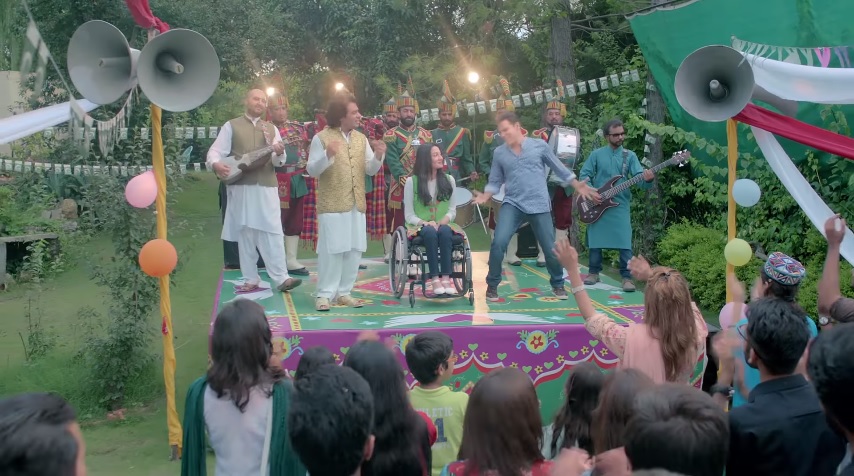 Aaron Haroon Rashid aka Haroon has proved himself to be multi-talented, he is an is an award winning British born Pakistani musician, singer, music producer, composer, director and social activist born in London, United Kingdom to a New Zealand mother and Pakistani father. His mix genes benefited him to turn into this handsome hunk that he is now. In this amazing journey, he has sold millions of singles and albums worldwide and has performed at large venues such as the Wembley Arena. Haroon is also the creator and director of the very successful, internationally acclaimed, multi award winning Pakistani 3D animated TV series Burka Avengers.

In the list of one of the most celebrates celebrities of Pakistan his name has always shined bright. From the start of his career he made songs that have never been removed from anyone’s playlist be it Mahbooba, Goriya, Jeekay Dekha, Ibadat-e-Ishq and the list goes on. But out of all his remarkable songs the one that is still played on every 14th august even after 15 years of its release is “Dil se”. This song still has an energy to bring back the long gone patriotic spirit in you.

This year has proved to be very special for Pakistan because on this 70th anniversary almost everyone is making their effort to put forward their best possible song and for all of this trend the credit goes to Coke Studio for starting it with their national anthem and then the minorities and now Haroon has remarked the song that we all love “Dil se” featuring Javed Bashir who is one of the best vocalists of the nation and the truly inspirational Muniba Mazari.

To give this song a totally different look Haroon has shot a brand-new video that showcases the positive image of the country. In the beginning the video show cases Pakistani legends including Abdul Sattar Edhi, Malala Yousaf Zai and Sharmeen Obaid Chinoy moving on to showing the beauty of the northern area and then comes the numerous Pakistani achievers including our Cricket team. Here is the video of the old and new version of song:

The original version of the song was released back in 2002 and made its mark by staying among the top most patriotic songs. That songs have a story regarding a couple traveling to Pakistan after partition which made its way to the hearts of all Pakistani’s. But Here is how Pakistani’s are reacting to the  new version of the song.

This is Brilliant 💚 loved every bit of it. #DilSayPakistan

Haroon never fails to impress. This recreated version of "Dil se Pakistan" is so amazing and mesmerizing. @TheRealHaroon @muniba_mazari

I wanna wear green, from head to toe, sit in a mehran and play Dil se Meine Dekha pakistan in full volume and roam around on agha shahi.