This Handsome Traffic Warden In Karachi Is Becoming The New Crush Of Pakistani Girls And Just Look At Him!

The traffic system in Pakistan and especially in the metropolitan city Karachi is getting worse every day. No one obeys traffic signals, no one follows rules and even nobody listens to the traffic police. Karachi may be the only city in the whole world where traffic wardens control the flow of vehicles according to the traffic instead of traffic being controlled by them, agree? It may not be the case every time as we often hear news of some dedicated police wardens who even in worse situations, do their duties with integrity.

Remember that classy ‘Chai wala’ who went viral because of his killer looks and became the crush of Pakistani girls? Well, this time its a similar situation but from a different field. Recently, a handsome hunk from Karachi’s roads caught everyone’s attention and social media is flooding with his pictures. Beware, ladies, its time to update your crush game.

Also read: After The Success Of Chaiwala, Here Are Some More Chaiwalay We Need To Think About

On the busy streets of metropole’s Gulistan e Jauhar area, an attractive face is ready to do your ‘hifazat.’ Known as Waqaar Ali, this guy is currently serving Karachi’s traffic police, ready to save you from accidents while being the main reason behind accidents, oops! Pakistani girls are drooling over this charming ‘traffic wala’ and girls are ready to get penalized by him.

Karachi’s ‘pyaara’ traffic wala for you! 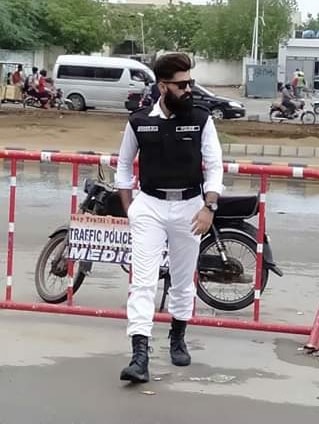 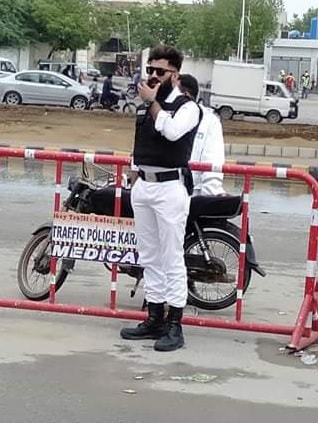 Well, it looks like that the traffic police has upgraded its standards from normal to premium, lol! The awaam is getting crazy over this traffic warden and social sites are full of comments showing the ‘tharki’ side. Here’s what Pakistani girls have to say about him!

Ready for chalan with 69 others!

May God protect everyone (Ameen)!

This is where you’ll find this handsome hunk. Thanks mate!

Comment: “Yes he stand in front of Faraz Avenue near Johar Mord and he let Bike walays go wrong way but he stops the car drivers. Coooollllllll.”

Check out: After Chai Wala, Pakistanis Are Going Gaga Over The Newfound ‘Tarbooz Wala’!

“Faraz Avenue near Johar Mor” is the spot where this guy is normally seen performing his duties. Here’s an ‘aasra’ for all the single ladies out there and the ones who are already committed, better luck next time.

Have you seen this traffic warden? Tell us in the comments below!

Cricketer Hasan Ali Is Gearing Up To Marry His Love From India And Pakistanis Can’t Wait To Welcome Her!
Renowned Naat Khwan Zulfiqar Ali Hussaini From Shan-e-Ramzan Passed Away Leaving A Legacy Behind!
To Top