Hamza Ali Abbasi Brought Islam In The 'Ali Zafar-Meesha' Controversy And People Are Not Amused!

The controversy that has taken Pakistani social media by storm, is going from bad to worse for both parties involved. Yesterday, Meesha Shafi had accused Ali Zafar of sexually harassing her, making physical advances, on Twitter. Since then, Ali Zafar had replied to the claims in an open letter as well.

People had been urging celebrities to take Meesha Shafi’s side, as it took a lot of guts from her to open up about the harassment she had faced at the hands of the ‘Rockstar’ Ali Zafar. However, just as two ends to every coin, there were many people who supported Ali Zafar, pertaining that Meesha should have brought forward proof as well. 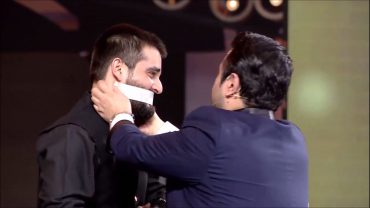 In a bid to defend ‘men’ and presumably Ali Zafar, another icon of the country, Hamza Ali Abbasi to presented his two cents on the issue. But just as always, people were NOT amused with his opinion on the issue of sexual harassment, at all. This is what he had to say:

“Random thought: With this entire #MeToo global epidemic on the rise, I am beginning to realize that ISLAM was right all along when it ordains gap between the 2 genders. So called modernism has brought us to a point where the line between flirting & harassment is insanely blurred.”

Random thought: With this entire #MeToo global epidemic on the rise, I am beginning to realise that ISLAM was right all along when it ordains gap between the 2 genders. So called modernism has brought us to a point where the line between flirting & harassment is insanely blurred.

Hamza Ali Abbasi’s ‘random’ thought, did not stay very random for long, as people started to show their dislike towards his statement. The popular public opinion stated that Hamza should not have brought Islam in a matter of harassment, as the case is different from what he has linked it with. Hamza targeted the growing ‘modernism’ and ‘lack of gap’ between two genders, as the sole cause of sexual harassment cases.

This is how people reacted to Hamza Ali Abbasi’s tweet

Hamza Ali Abbasi has always managed to stay on the wrong side. Mashallah what consistency.

It took a while, but Hamza Ali Abbasi is back on the scene with a chutya opinion on the issue of the day. We’ve got all the hits! The Me Too “epidemic”, ISLAM in all caps, “So called” modernism. Hamza Ali Abbasi, coming to an aneurysm near you! https://t.co/V6tA7KASTt

TIL: Hamza Ali Abbasi has a CSS.

I always knew CSS is overrated.

According to Scientist Hamza Ali Abbasi, the #MeToo movement is a disease.#Alizafar #Pakistan https://t.co/wg535qlu1D

Somebody needs to tell Hamza Ali Abbasi that this country, even though not secular, has always been progressive. A huge percentage of the population grows up studying in co-educational schools, where they interact with the opposite gender everyday, growing up doing the same. To bring Islam and modernism in cases of sexual harassment, did not, at all, go well with the public.