Hamza Ali Abbasi recently tied the knot with his ‘platonic friend’ of 2 years, Naimal Khawar Khan in Islamabad at Monal. It was a small intimate affair with only close friends and family. The couple radiated happiness and pictures personified elegance. After Hasan Ali’s wedding to an Indian girl, this next Shaadi sure became the awaited event, as the sudden news of the most desired bachelor Hamza Ali Abbasi getting hitched to Naimal came as a surprise. However, whether it was a pleasant one or not, is something to be left to the Pakistani women. Haha. 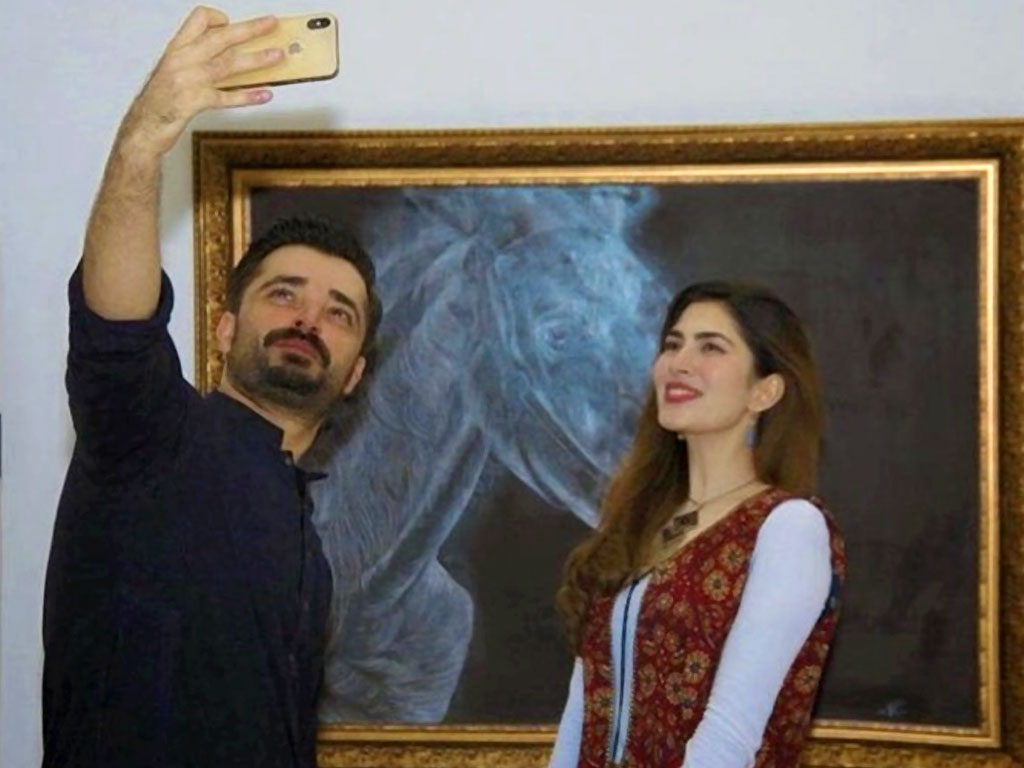 Hamza wrote a long paragraph pre-wedding announcing his marriage and declaring his love for his then wife-to-be mentioning how they are going to honor the Islamically recommended nikah which is suppose to be simple and small.

The pictures from the day-nikkah were bound to go viral on social media and so they did, leading to a full-blown online debate on whether their wedding really was that inexpensive as Hamza claimed it would be.

But, they made a very gorgeous couple!

And Naimal made a stunning bride.

Pakistanis went sherlock on the details and started debating online.

One user pointed out how the location and the photographers that were booked for the event were not cheap at all including the decor that screamed ‘expensive”!

“Monal is super expensive. Maha is the most expensive photographer in Islamabad. The bride is wearing a designer dress and the wedding set up is super lavish with imported and mehenge tareen flowers. If this isn’t a fat wedding and showing off, I don’t know what is!”

Monal is super expensive. Maha is the most expensive photographer in Islamabad. The bride is wearing a designer dress and the wedding set up is super lavish with imported and mehenge tareen flowers. If this isn't a fat wedding and showing off, I don't know what is! https://t.co/aRT8QnXqVS

To this several argued saying that Monal isn’t that costly and the renown wedding photographer Maha doesn’t charge a hefty amount as claimed by some.

“Monal isn’t very expensive. I belong to middle class and still been there many times, been to this lounge too. The bride is wearing her mother’s dress with a little bit of renovation, hunni. ”

Monal is atleast 3 times less expensive than a lavish hall. Trust me my parents have paid for both (sis vs mine) .
But besides point isn't to have least expensive wedding but inspire the youth that u dont have to spend millions on multi function wedding days. https://t.co/eHiCaxAL3B

If these figures are correct then that is not simple at all. Yikes!

I agree about that but I know that cost of 2 course meal at monal costs like 6k+ for 4 people. Designer clothes 250k+. Maha photograper 150k+ so yeah they could’ve done a simple nikkah in masjid. Although it’s none of our business but they are the ones who started bragging 🙈

From the venue, to photographers, down to Naimal’s dress; everything was discussed and debated on. The fact that she got her mother’s wedding dress freshened up by a designer also added to the debate of their shaadi not being near to simple.

Guys, calm down. Jazbaati honay se Kuch nahi hota. I don’t hate them both. The only point is not to call it a simple and less expensive wedding for obvious reasons.

As far as the dress is concerned, yes, it belongs to Naimal’s mom but she got it “refreshed” by a designer pic.twitter.com/K6cQURby4R

The argument spanned across all major social platforms including Facebook. However, at the end of the day, it is about the graceful nikkah that bound these two souls together and how happy they looked stepping into new chapters of their lives. We wish Hamza and Naimal lifetime of happiness and bliss.

Shaikh Dawood Of Master Tiles Had An Extravagant Wedding But People Are Asking, “Dulhan Kahan Hai”?
This Man Was Allegedly Killed By His Girlfriend In Karachi After He Refused To Marry Her And Tauba Hai!
To Top