Belly dance is one of the most renowned forms of dancing, performed all over the world, especially in the Arabic countries. The Arabic expressive dance originates from Egypt. The focus of the dance revolves around making expressive movements from the torso in a certain costume. In most parts of the world, a flair material is wrapped around the torse, enhancing the dance movements.

Because the dance is expressive in nature, it is something which is not practiced in Pakistan. However, a student from Peshawar just performed it in a very restricted manner and people actually liked it.

Representing herself in the Talent Expo, the Student Performed Belly Dance In Front a Huge Population

As shared in the news package, the student belongs to Peshawar Benazir University. Given how amazing her dance was, what makes her performance stand out the most is the way she was covered.

The performer was wearing a scarf and covered her face with a veil. She was covered from head to toe and continued winning the audience over by her moves.

Despite the Student Being Covered from Head to Toe, Pakistani Men were Quick to Shame her 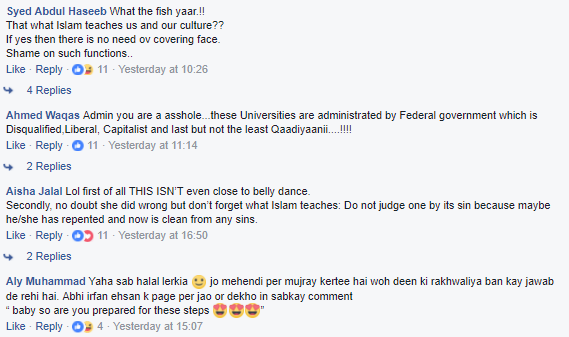 Well, if you have a talent or an interest in something which exhibits the teachings of the West, you instantly become the worst person in the name of Islam, right?

Nobody is seeing how the individual has herself fully covered and just wants to showcase her talent.