Pakistani Boy Takes Revenge On Ex-Girlfriend By Ordering Her Food Worth Rs. 13000

Revenge stories aren’t always as harmless as the one in the discussion today. As it is usually said, sometimes it lasts in love, but sometimes it hurts instead. One Pakistani guy found a very creative way to take revenge on his ex-girlfriend, and the way he executed it, is nothing short of brilliant.

A Facebook post going viral in Pakistan depicted the story with screenshots of the conversation attached. The guy in the story, H*, was approached by his ex-girlfriend after a year of their break up. The reason? She was hungry and wanted H* to order food for her. 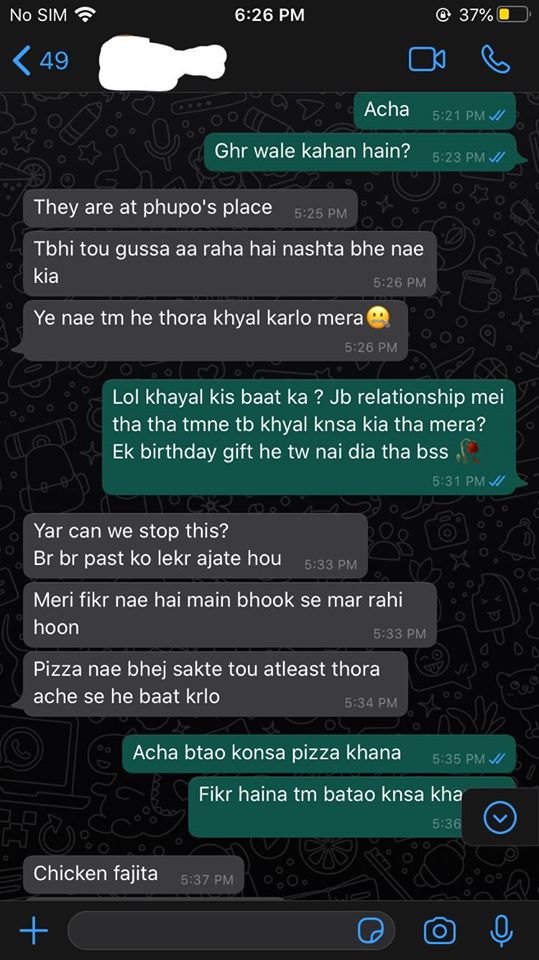 The conversation started out with a little catching up before the girl asked H* to send her some food. H*, obviously pissed off, didn’t take any prisoners and ordered a huge amount of food for her.

He logged on to his food delivery app, and ordered a mammoth amount of food worth Rs. 13,500. He took her address and the order was stamped. When the girl saw the order from Pizza Hut the guy had made for her, it melted her heart and she rushed to apologize. She asked him, what she was going to do with so much food? The warm-hearted H* said she could share it with her family.

‘Tum to dil per legaye yar’ 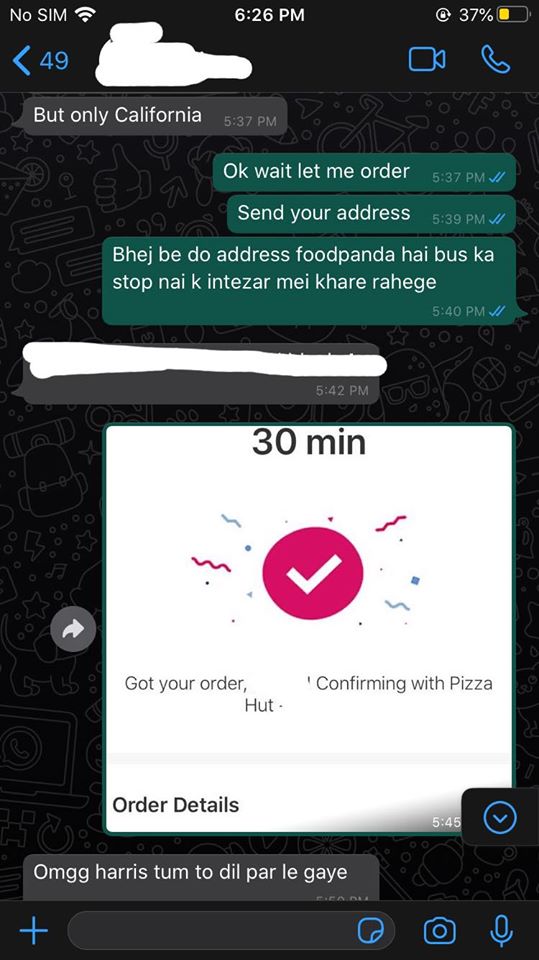 The girl was very happy inside, that her ex, who she messaged after a year, was still ready to spend so much money on her. However, she didn’t know what she was getting into.

H* told her that he had paid for the food worth Rs. 13,500 from his card, so she didn’t have to give the rider any money. With shoots of happiness inside her, all she could do was wait for the food.

‘Not every ex is same’ 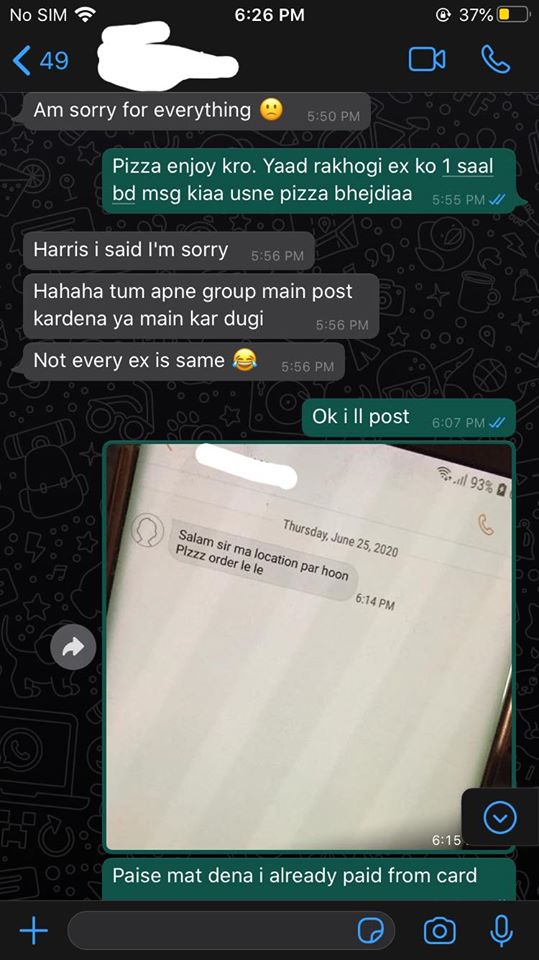 When the delivery guy arrived with the huge order, the text H*’s ex sent literally changed the whole scenario of the viral post, making it one of the greatest revenge stories of all time. 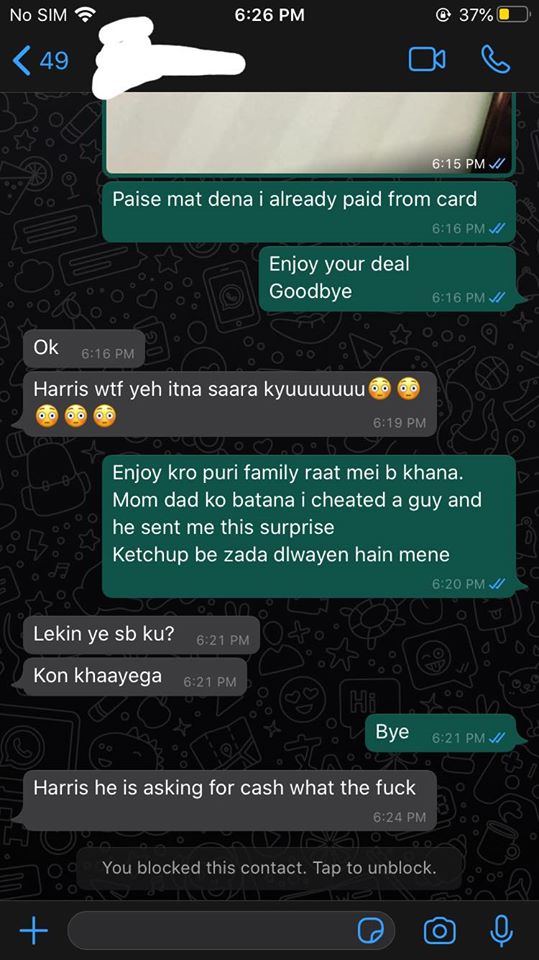 “H* he is asking for cash, what the ****?” – BOOM! Her whole world started crashing down when she figured she had been duped. H* ordered the food, told her he had paid the money from his card, but he had not. Now, his ex-girlfriend was being forced to pay Rs. 13,500 for an order she had not made. 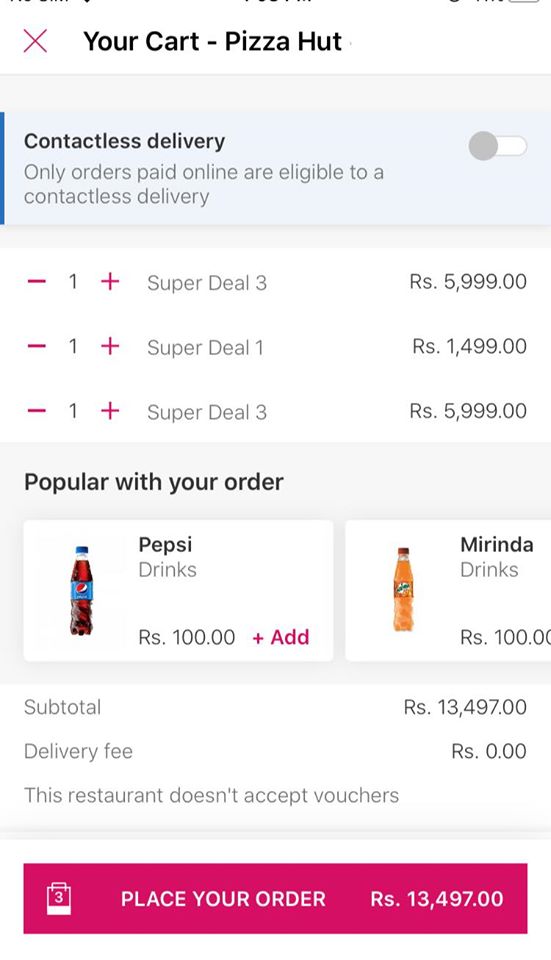 This amazing move resulted in the actions going viral on social media. Many suggested that this is exactly what gold-digging girls who message their exes deserved. However, people on social media have also pointed out that the post might be a scam. Many have suggested that food delivery apps take an advance payment before you order food worth an amount so big.

Previously, another guy from Pakistan found a very creative way to take revenge on his ex-girlfriend, by getting her failed in exams.

Hajj 2020 Decision: What You Need To Know About This Year’s Pilgrimage
Viral WhatsApp Messages Claim Govt Is Sending COVID-19 Bodies To Brazilian ‘Adamkhor’
To Top