This Guy Shared a Freaky Experience with a Local Cab Driver and It Comes with a Warning!

With ease comes a lot of pain as well. While the local cab services in Pakistan seem to be on a rise, there are some aspects of it which cannot be ignored. The cab culture in Pakistan has provided the locals with the ease they didn’t have before. Students, especially, confided to traveling through limited means took a lot of their time. Conclusively, the cab services have made commuting a lot easier.

However, with an extensive system as such of these cab services, provided that they also offer the ease of allowing locals to become captains, it is necessary for the brand to meet the guidelines for multiple reasons. To provide safety to the riders is one of the prime reasons, knowing how captains need to be groomed enough.

Having this Said, a Local Rider Who Booked a Cab from Careem Faced Some Difficulties According to his Post!

Dear Careem with due respect that your captains don’t have.
I was a regular customer of your service but today I’m very disappointed with the accident I experienced.
So I ordered this Careem captain named (Ashfaq Ahmed) maroon Mira (BHA-711)

And this guy was supposed to pick me up from Nuplex cinema, first he came late which was acceptable and I was with one of my cousin (she was a girl) so he picked us up and the way he asked me “tumhara Naam kya hai” in a very harsh way i found that shady so I told my name and my drop off location so he started the ride and took a couple of KMs and all of a sudden he cancelled the ride on purpose in the middle of a dark street so I asked him the reason so he said “company ne cancel kerdi hai tum Mujhe mere paisay dou and koi or ride order kero” i was like “at least drop me somewhere safe since I am with a girl and it’s not safe for me to stand in the middle of nowhere with girl” so all of a sudden he pulled out a gun and asked me for his money.

Since I had to save my cousin from that moron so I gave him his money and then he asked me for more money which I told him I don’t have any money please let us go so he goes like give me that bag pointing towards my cousins purse so he took them and took 5k from her bag and further said “utro car se tum dono “ and abused us too so i took out my phone since a couple of cars passed by and started recording him so he hid the gun and took out his phone and started recording me and my cousin who was crying in the back since she was so scared and the guy kept on recording and said “chal chal” as you guys can see and since I was recording him he even tried to hit me with the car.
Kindly look into this matter and train your captain and check and balance is must.
This could happen to anyone.

Here’s the Link to the Video

Careem, However, Did Report to the Post to Take Action Against the Driver 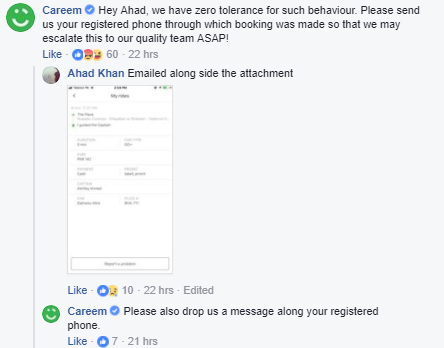 As mentioned earlier, the extensive network of cab services does sometimes make it difficult to keep a check and balance. However, knowing how people from different walks of life use these services, it is essentially important to protect the locals opting the services.