Female Commando from KPK now to serve the UN’s, Peacekeeping Force. Negative news consumes us every day; murders, rapes, and diseases spreading. It is about time we paid attention to something good.

Brave Gul Nisa belongs to a remote region, Tank. She has been trained as a commando to carry out missions in Pakistan. Moreover, she has been serving the KPK police force for 5 years now.

Gul Nisa, who will be shortly joining the UN’s Peacekeeping force along with her fellow officers feels proud of herself. UN’s program selected only 24 women out of 80 for the said task.

However, on the 1st of February, members of the first-ever Female Engagement Team (FET), which will be working on the United Nations Organization Stabilization Mission, already awarded Medal by the UN.

We wish them the very best and hope that they keep making us proud. Such initiatives will make Pakistan’s image more vibrant.

Women in our establishment!

Women of Pakistan are doing wonders in their own respected fields. Whether it be army, navy or any field of our establishment, women are playing a vital role.

The strength of a country is determined by the education of young minds. However, as more and more daughters of Pakistan are educating themselves and serving their nation, there is no evil that can harm us. 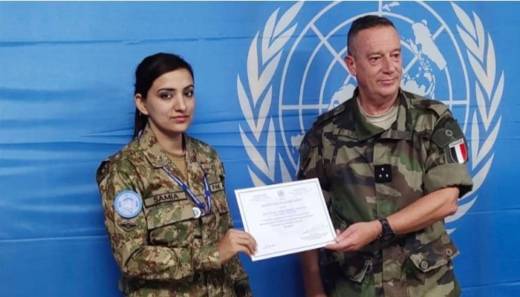 Meanwhile, rather than sitting at home and wasting their talent, now more and more Pakistani women are doing their best to educate themselves and be more productive.

Pakistani women have achieved the best of both worlds. Since they are now being recognized on an international level.

The UN awarding Pakistan women for being a vital part of their peacekeeping program. However, it has what it lacked the most. A women army to make the backbone even stronger.

Nonetheless, whether it be Mehwish Hayat, Mahira Khan or any other women of Pakistan. All of them are making us proud.

Pakistan’s government gave Tamgha-e-Imtiaz to Mehwish Hayat for her utmost dedication. Malala Yousufzai received a Nobel prize for her love for freedom and education for women.

Moreover, it is time we started acknowledging the women near us, as men we are supposed to support them in all ways for all of us to be a better part of ourselves.