Guantánamo Diary: A diary written by a Guantanamo Bay prisoner has been published 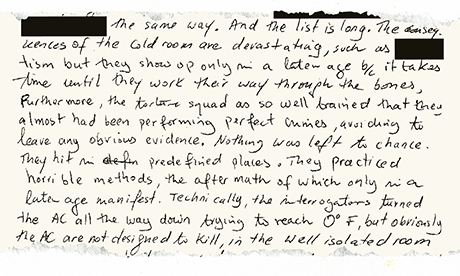 I started to recite the Koran quietly, for prayer was forbidden. Once ________ said, “Why don’t you pray? Go ahead and pray!” I was like, How friendly! But as soon as I started to pray, ____ started to make fun of my religion, and so I settled for praying in my heart so I didn’t give ____ the opportunity to commit blasphemy. Making fun of somebody else’s religion is one of the most barbaric acts. President Bush described his holy war against the so-called terrorism as a war between the civilized and barbaric world. But his government committed more barbaric acts than the terrorists themselves. I can name tons of war crimes that Bush’s government is involved in.

This particular day was one of the roughest days in my inter- rogation before the day around the end of August that was my “Birthday Party” as _______ called it. _______ brought someone who was apparently a Marine; he wore a ________ .

“Yes or no?” the guest shouted, loud beyond belief, in a show to scare me, and maybe to impress _______, who knows? I found his method very childish and silly.

I looked at him, smiled, and said, “Neither!” The guest threw the chair from beneath me violently. I fell on the chains. Oh, it hurt.

“Stand up, motherfucker,” they both shouted, almost synchronous. Then a session of torture and humiliation started. They started to ask me the questions again after they made me stand up, but it was too late, because I told them a million times, “Whenever you start to torture me, I’m not gonna say a single word.” And that was always accurate; for the rest of the day, they exclusively talked.

You joined the wrong team, boy. You fought for a lost cause _______ turned the air conditioner all the way down to bring me to freezing. This method had been practiced in the camp at least since August 2002. I had seen people who were exposed to the frozen room day after day; by then, the list was long. The consequences of the cold room are devastating, such as ______tism, but they show up only at a later age because it takes time until they work their way through the bones. The torture squad was so well trained that they were performing almost perfect crimes, avoiding leaving any obvious evidence. Nothing was left to chance. They hit in predefined places.

They practiced horrible methods, the aftermath of which would only manifest later. The interrogators turned the A/C all the way down trying to reach 0°, but obviously air conditioners are not designed to kill, so in the well insulated room the A/C fought its way to 49°F, which, if you are interested in math like me, is 9.4°C—in other words, very, very cold, especially for some- body who had to stay in it more than twelve hours, had no underwear and just a very thin uniform, and who comes from a hot country. Somebody from Saudi Arabia cannot take as much cold as somebody from Sweden; and vice versa, when it comes to hot weather. Interrogators took these factors in con- sideration and used them effectively.

Similar Story – After Torturing 118 Black Men, Cop Jon Burge Walks Out of Jail In Less Than 4 Years – With Full Pension!

You may ask, Where were the interrogators after installing the detainee in the frozen room? Actually, it’s a good question. First, the interrogators didn’t stay in the room; they would just come for the humiliation, degradation, discouragement, or other factor of torture, and after that they left the room and went to the monitoring room next door. Second, interrogators were adequately dressed; for instance ______ was dressed like somebody entering a meat locker. In spite of that, they didn’t stay long with the detainee. Third, there’s a big psychological difference when you are exposed to a cold place for purpose of torture, and when you just go there for fun and a challenge. And lastly, the interrogators kept moving in the room, which meant blood circulation, which meant keeping themselves warm while the detainee was _________ the whole time to the floor, standing for the most part. All I could do was move my feet and rub my hands. But the Marine guy stopped me from rubbing my hands by ordering a special chain that shackled my hands on my opposite hips. When I get nervous I always start to rub my hands together and write on my body, and that drove my interrogators crazy.

“What are you writing?” ___________ shouted. “Either you tell me or you stop the fuck doing that.” But I couldn’t stop; it was unintentional. The Marine guy started to throw chairs around, hit me with his forehead, and describe me with all kinds of adjectives I didn’t deserve, for no reason.

“You joined the wrong team, boy. You fought for a lost cause,” he said, alongside a bunch of trash talk degrading my family, my religion, and myself, not to mention all kinds of threats against my family to pay for “my crimes,” which goes against any common sense. I knew that he had no power, but

I knew that he was speaking on behalf of the most powerful country in the world, and obviously enjoyed the full support of his government. However, I would rather save you, Dear Reader, from quoting his garbage. The guy was nuts. He asked me about things I have no clue about, and names I never heard.

“I have been in __________,” he said, “and do you know who was our host? The President! We had a good time in the palace.” The Marine guy asked questions and answered them himself.*

When the man failed to impress me with all the talk and humiliation, and with the threat to arrest my family since the ______________ was an obedient servant of the U.S., he started to hurt me more. He brought ice-cold water and soaked me all over my body, with my clothes still on me. It was so awful; I kept shaking like a Parkinson’s patient. Technically I wasn’t able to talk anymore. The guy was stupid: he was literally executing me but in a slow way. _______ gestured to him to stop pouring water on me. Another detainee had told me a “good” interrogator suggested he eat in order to reduce the pain, but I refused to eat anything; I couldn’t open my mouth anyway.

The guy was very hot when _______ stopped him because ____ was afraid of the paperwork that would result in case of my death. So he found another technique, namely he brought a CD player with a booster and started to play some rap music. I didn’t really mind the music because it made me forget my pain. Actually, the music was a blessing in disguise; I was trying to make sense of the words. All I understood was that the music was about love. Can you believe it? Love! All I had experienced lately was hatred, or the consequences thereof.

“Listen to that, Motherfucker!” said the guest, while closing the door violently behind him. “You’re gonna get the same shit day after day, and guess what? It’s getting worse. What you’re seeing is only the beginning,” said _______. I kept praying and ignoring what they were doing.

“Oh, ALLAH help me…..Oh Allah have mercy on me” ____ kept mimicking my prayers, “ALLAH, ALLAH…. There is no Allah. He let you down!” I smiled at how ignorant ____ was, talking about the Lord like that. But the Lord is very patient, and doesn’t need to rush to punishment, because there is no escaping him.

Redactions marked in the text were made by the US government when Mohamedou Ould Slahi’s diary was cleared for public release.