On 11th November 2016, Sindh appointed their 31st governor, hoping that with his given experience, situations will get better for the province. Justice Retired Saeed Uz Zaman Siddiqui was appointed this past year and three days after he took an oath as the governor Sindh, he was admitted to a hospital. 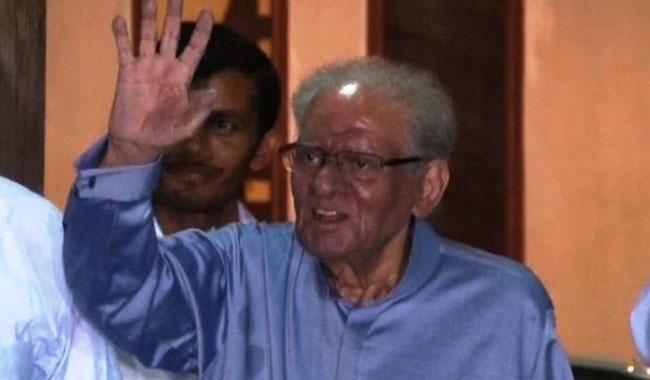 After replacing Sindh’s longest serving Governor Ishratul Ebad, governor Siddiqui was all set to take control, but his health and his age were not on his side. After being admitted for 35 days, the governor was discharged on the 15th of December. This morning, however, the late governor was rushed to a private hospital and unfortunately, he couldn’t fight for his life.

According to the sources, the governor was never fit enough to have left the hospital but due to the pressure of his family, he had to leave the parameters. Even after he was discharged, he was accompanied by his private 24-hour medical team which included chest specialist, orthopedics, surgeons and neurological physicians.

The entire nation passes condolences and prayers to the deceased.

Sad to hear about Governor Sindh,may he RIP. One really needs to question PMLN on appointing an old & unhealthy man as a governor.

Governor Sindh justice Saeed-uz- Zaman Siddiqui passed away.
May Allah Give him Good place in Jannah..Ameen

Sad to hear about the demise of Governor Sindh & Former CJ Saeed uz Zaman Siddiqui. May Allah SWT grant him the highest place in Jannah.

As for now, Speaker Sindh Assembly Agha Siraj Durrani is appointed as acting governor of Sindh.

Born on the 1st of December 1938, late governor Siddiqui was born in Lucknow and migrated to the currently known country of Bangladesh with his family. After graduating in law from the University of Karachi, Siddiqui was practicing law as an advocate in the high court by 1963 and in 1968 he was in supreme court.

Our condolences to his family and close ones. Please take a moment to recite Surah Fatiha for the deceased.

8 Easy And Healthy Tips To Remain Fit In Your Hectic Routines.
Pakistan’s Big Heart: After Selfies With The Police, Indian Fishermen Released
To Top