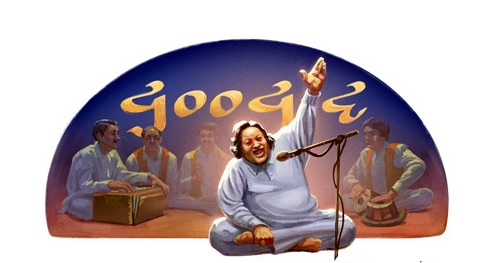 Nusrat Fateh Ali Khan a.k.a Khan Sahib, (‘Shahanshah-e-Qawwali’) is indeed one of the greatest singers of all times. Not only on Pakistanis, his music has taken moved many around the globe. He has indeed no replacement. He is the one and only!

Google has a tradition of highlighting the great minds of the world by placing doodle on the search engine. Today, on the occasion of his 67th birthday Google marked the day with a doodle.

Nusrat Fateh Ali Khan was born on October 13, 1948 in Faisalabad, belonging to a family of qawwals. The family lineage goes back to six centuries.  With his mesmerizing voice he has and still rules the hearts of millions all around the world.

“My father [the Qawwali singer Ustad Fateh Ali Khan] died in 1964, and ten days later, I dreamed that he came to me and asked me to sing. I said I could not, but he told me to try. He touched my throat, I started to sing, and then I woke up singing. I had dreamed that my first live performance would be at my father’s chilla [funeral ceremony], where we would all sit together again and read prayers from the Koran and so on. On the fortieth day after his death, we held the ceremony, and I performed for the very first time.”

Here are some of the classical, unforgettable, timeless songs by the maestro relished by people of every age group!

Also See: 8 Things That Happened At Lux Style Awards (LSA) You Might Not Know

Also See: 5 Reasons Why You Must Watch ‘Jawani Phir Nahi Aani’ THIS Weekend