Share
Tweet
Share
Share
Email
Having more money than knowing what to do with could, supposedly, be a burden. However,  Ahsan Iqbal Hashmi, a goldsmith, certainly knows where to invest his money. The guy made his dream come true and got himself a golden heavy bike.
The owner of the bike keeps his golden bike inside his jewelry shop, called Sunar Jewellers. This shop is located in Defence. It is astonishing to see a golden bike kept in a shop that sells gold. 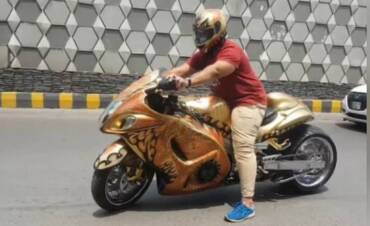 What’s so great about the heavy bike?

Ahsan shares about how the sportbike of his dream, the Suzuki Hayabusa, while talking to Daily Pakistan. His bike is painted with golden chrome, came into reality. As per the owner, initially, the bike had been imported from the US.

Later, he opened up the bike and sent it to a company in Dubai. It did all the paintwork on the bike. He imported the paint from Paris as a company there is best known for its gold paint, which is not found anywhere else.

He also adds that he and his brother then, took the paint, along with the bike to Dubai. All the work on it is done by Dubai’s company. Since 2014 he has the bike. However, the owner talks about how he takes care of it more than he actually rides it.

‘I am crazy about bikes’

Upon asking what is so different about this golden bike, it’s revealed that it is because of its 360-degree tires, lights, and color combination- gold chrome. In addition to this, no Suzuki Hayabusa has such huge tires as the one he has.

There is some gold plated element in the golden chrome paint and it is designed in an Egyptian style. Upon requesting the locals of Dubai, the owner got them to showcase their Egyptian finesse on the bike.

Furthermore, the other thing unique about the golden bike is that it has a frame cover to avoid heat. The seat is way more comfortable compared to other ordinary bikes. What’s immensely shocking is that more than $30,000 were spent only on the add ons.

Are you impressed by the uber-expensive framework of the customized heavy bike? Well, if you are a bike lover like Ahsan, then you certainly would be!
Read More: Co-Founder Of Johnny & Jugnu Builds A Heavy Bike!
What do you think of this story? Let us know in the comments section below.

You Can Still Play PUBG In Pakistan Despite A Ban! Want To Know How?
A Private School Wants Students To Take ‘Online Swimming Classes’ & We Are Confused
To Top