“Who has forbidden the adornment of Allah which He has brought forth for His servants, and the good things of His providing?” (Al-A`raf: 32)

Islam honors the elegance and beautification of men and women. Cleanliness is regarded as 1/4th of the faith of a Muslim.

However, there are certain things that are forbidden for both, men and women in Islam. There are two kinds of adornment that Islam has prohibited men from wearing. At the same time, women are allowed to wear them.

Muslim men are not allowed to wear clothes or other items made of pure silk and gold ornaments. According to Hazrat Ali (RA), Prophet Muhammad (SAWW) clearly displayed to Muslim Ummah why gold and pure silk are prohibited. Reported by Ahmad, Abu Dawud, an-Nasa’i, Ibn Hayyan, and Ibn Majah, Prophet Muhammad (SAWW) took silk in his right hand and gold in his left and said, “These two are haram for the males among my followers…but halal for the females.”

Reported by Al-Bukhari, Hazrat Umar (RA) heard the Prophet Muhammad (SAWW) say, “Do not wear silk, for those who wear it in this life shall not wear it in the Hereafter.”

Al-Bukhari also reported, “While referring to a silk garment, Hazrat Muhammad (SAWW) said, ‘this is the dress of a man who has no character.'”

On another occasion, the Prophet (SAWW) saw a man who was wearing a gold ring. The Prophet immediately took it from the hand of the person, threw it away and said, “Does a person pick up a piece of burning coal and hold it in his hand?” As the Prophet (SAWW) left the place, someone asked the same, “Why do you not pick it up and benefit from it?” He replied, “No, by Allah! I shall not pick it up after the Messenger of Allah (peace and blessings be upon him) has thrown it away.” (Reported by Muslim) 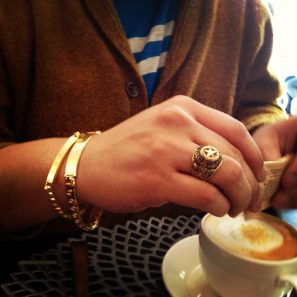 Men, However, Are Allowed to Wear Silver

On the authority of Ibn `Umar, al-Bukhari reported the former saying, “The Messenger of Allah (peace and blessings be upon him) wore a silver ring. After him, Abu Bakr and then `Umar and `Uthman wore it, until it fell off his finger into the well of Arees.” (Reported by al-Bukhari).

On the contrary, in the Sahih of al-Bukhari, we find that the Messenger of Allah (peace and blessings be upon him) advised a man who wanted to marry a woman too, “Present her with a gift, even if it be a ring made of iron.” On the basis of this hadith, al-Bukhari inferred the permissibility of iron rings.