After the national sacrifice of major political personalities, Pakistanis are busy in buying their sacrificial animals. At this time of the year, the whole country gets filled with cows and goats and the variety in them is such a delight to watch. On nearly every street, every road, people from different rural areas bring their animals to the cities and sell them and make a good profit out of it.

Every year on Eid ul Azha, one thing that remains constant except “bhai kitnay ka liya” are the rare breed of animals. In Karachi’s Maveshi Mandi which is also said to be the largest in Pakistan, different cattle farms bring their homegrown animals which are then sold for a good price. But one thing that outcast them all is the unique type of animals which seal the show. This time also, a goat and a cow have become the stars of Karachi and many locals are visiting the mandi just to see them. 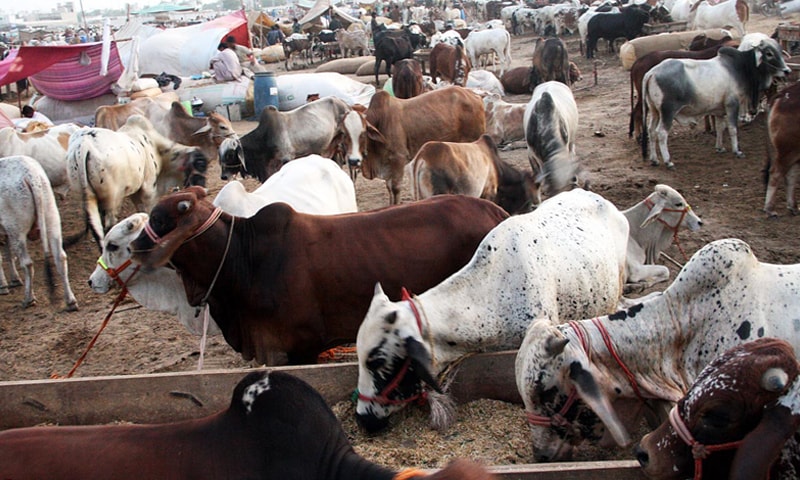 The famous business group Surmawala has also set up its tent in the Maveshi Mandi and their animals are making Karachites go crazy. After taking your cow for a pre eid was for only Rs.100 at the newly opened service station in Karachi, its time to check the most expensive sacrificial animals of 2019. Worth Rs.1 crore, ‘Surmawala King’ the giant black beast is making it to the news because of his massive size. There’s also a small-sized goat in the same tent which cost around Rs.3 lacs and every kid just wants to take it home.

The most expensive sacrificial animals in Maveshi Mandi this year!

Recently, the Sanam Baloch along with his ‘Subah Saweray’ team visited the Surmawala tent. Started from the animals which were disabled from birth, the host gradually moved onto the Rs.3 lacs ‘bakra’ the whole town is talking about and its extremely small size stunned everyone. Finally, Sanam showed the beast called ‘Surmawala King’ worth Rs.1 crore and its huge size and glowy black color could easily attract anyone.

Sanam Baloch with his morning show team in Maveshi Mandi!

Check out: 6 Tips For Experiencing A Healthy Eid-ul-Azha!

Till now no one has bought the expensive sacrificial animals but they have definitely created hype among Pakistanis. The owner of “Surmawala King” says that his bull is the most expensive one in the whole mandi and no one can beta him in that. Well, let’s see who has the guts to buy the King for this year.

Prediction of Naimat Ullah Shah Wali And Other Sufi Saints Regarding India And Pakistan War
Fawad Chaudhry Gave A Befitting Reply To An Indian Major On Twitter And Literally Shut Him Up!
To Top