Pakistani celebrities are often trolled in different ways and styles for their antics. Some of these can be due to unintentional mistakes, while some are very much intentional and well disappoint the public massively. Henceforth, it is more than often that our once beloved stars become the target of incessant trolling. Recently an act of mimicry on Sadaf Kanwal was done by a girl and she was accurate.

In the digital age of now, the practice of trolling has also taken into different categories, from having memes, giphs, mimicry and the very common, ‘desi commentary’.

Interestingly, whenever we hear the word trolling now, somehow we are already know that the Pakistan’s most hated celebrity couple Sadaf Kanwal and Shahroz Sabzwari are involved.  Since, their secret wedding a few months ago, they have been under the light of hate and so much more.

From calling Sadaf out for being a man-stealer, to a lot of bodyshaming to what not, Sadaf Kanwal became a target of continuous trolling. Here’s how another troll took a dig at Sadaf Kanwal, by mimicking her in the most hilarious and accurate way.

A post shared by All Pakistan Showbiz Starz (@allpakshowbizstarz) on Aug 9, 2020 at 9:53am PDT

Funny right? Even we can’t stop laughing at this hilarious and accurate depiction and mimicry of Sadaf Kanwal. In fact, she managed to look just like Sadaf also! It’s both cute and funny at the same time.As a matter of fact, she manages to even capture the small and minor glimpses and details of the starlet in the most accurate light. 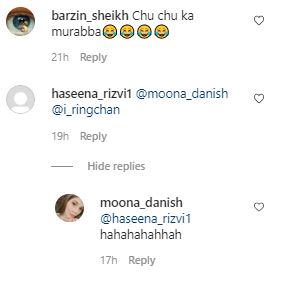 Even fans can’t get over this epic mimicry and portrayal of Sadaf Kanwal. Like its absolutely wow!

If Sadaf thought that the trolling would one day end, sadly she is oh so wrong. If one asks, perhaps the trolling might never end, especially if their statements keep on getting more and more controversial.

Take the recent affairs for instance, neither one of them knows when to stop saying the wrong things at the wrong time. Apparently, Shahroz Sabzwari thinks its okay to support a killer! You can’t expect to be carried on a bed of roses after that? Right?

All in all, its like both Sadaf and Shahroz think that negative publicity is actually publicity! Regardless, this girl just made sure they refrain from doing so in the future. Well! At least we hope; but then again, this is Pakistan and this is the ever loving Shahroz and his beloved wife Sadaf we are talking about!