Even though private cab companies in Pakistan are being seen as saviors of the public, providing them with a safer and cheaper alternative to public transport, not all has been fine in the business due to a number of reasons. The biggest issue they face right now is the hiring of a number of rogue drivers, who go against company policies.

In a recent incident, two girls from Lahore had a very scary encounter with a private cab driver, which they want everybody to know. One of the girls spoke out publicly on social media, giving details of her frightening experience.

“Today I was taking a careem taxi service to the airport to see my friend, The cab driver said to be video calling his mother but called a random scary looking man and turned the car light on and showed me and my 19 year old cousin to him and said I am taking these girls to the airport. He was constantly using his phone even though I asked him to put it away. He also had a child’s lock on us. I changed our drop off location told him to drop us at subway that we didn’t want to go to the airport anymore and I believe he was trying to text our new location in a sneaky manner. Despite me telling him not to use the phone he called someone and told that person “dou hain” . He kept wanting to take routes that were under development saying “ yehan traffic kam ho gi”. I had asked him to take canal bank road and he didn’t, he took the route of a housing society under construction. I forced him to stop the taxi near a hospital and had to walk and take a rickshaw from there. Their website has no number to contact. Their helpline has this annoying machine giving instructions on how to use careem.
I have never felt so scared. I don’t want this to happen to anyone else. So please DO NOT TAKE THIS CAB SERVICE !!! And please share.” 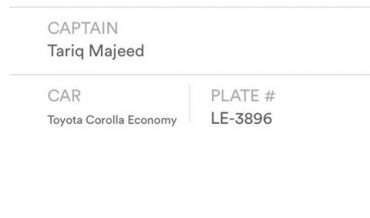 The girl got an incredible response from random people on social media who all spoke in her support and wanted to slate the cab driver, who is now being publicly shamed. However, after the post went viral, the cab service was approached on social media by different people and the company stated their response to the incident as well.

The cab service spoke through their official account on Twitter that stern action had been taken against the driver and he had been blocked and blacklisted from working with the company. The empowerment of people through social media lead to many such success stories where wrongdoers have been brought to justice by being called out publicly.

It is also pertinent to add here that black sheep are present everywhere. While hiring drivers, cab companies can only take enough information from drivers that gives them a clean chit to work, nobody can find out what goes on in their minds and hearts, just like any other service or job.